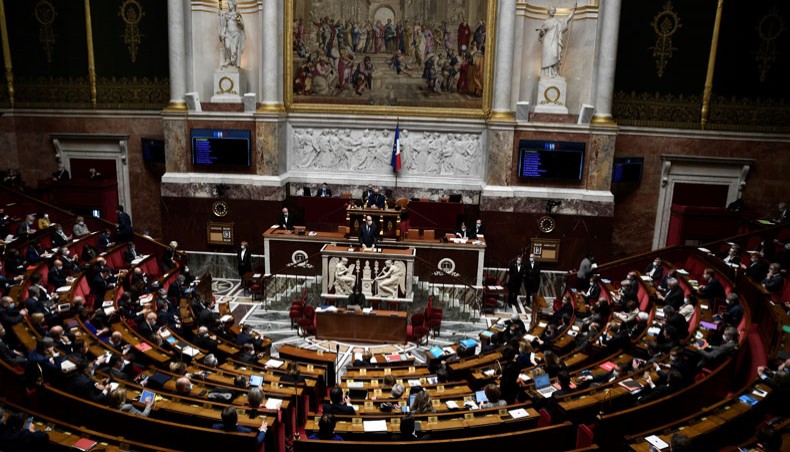 French prime minister Jean Castex delivers a speech during a debate on whether or not to maintain regional and departmental elections of June 2021 due to the COVID-19 pandemic at the French National Assembly in Paris, on April 13, 2021. -- AFP photo

France’s parliament adopted legislation on Thursday setting the minimum age of sexual consent at 15, a step the justice minister called ‘historic’ in a country with traditionally permissive attitudes about sex.

Sex with children under 15 is to be considered rape, punishable by up to 20 years in prison, unless there is a small age gap between the two partners.

The move brings France in line with most other Western countries following years of campaigning by abuse victims.

In cases of incest, the age of consent will be 18.

‘We do not touch children,’ justice minister Eric Dupond-Moretti said.

‘No adult aggressor will be able to rely on the consent of a minor’ under 15, he added, calling it a ‘historic step.’

Under previous French law, prosecutors had to prove that a minor was forced, threatened or tricked into having sex with an adult in order to bring charges of rape or sexual assault.

The new law was initiated by members of the Senate, who had suggested the age of consent be set at 13, which would have been one of the lowest in Europe.

But president Emmanuel Macron’s government pushed for it to be set higher.

The legislation does allow for sex between a teen and a young adult up to five years older — a gap criticised by some MPs as too large but which Dupond-Moretti has defended.

The justice minister has said he did not want ‘to put a youngster aged 18 on trial because he had consensual sex with a girl aged fourteen-and-a-half.’

The bill was the subject of some 300 amendments in the lower house national assembly.

The issue of consent has repeatedly come up for debate since 2018 when it emerged that a 28-year-old man, who had sex with an 11-year-old girl he met in a park, had initially been charged with a lesser sexual offence, not rape.

The case caused a public outcry in France, where sex between adults and minors has previously often been shrugged off as harmless in cases where the encounter was presented as consensual, usually by the adult.

The issue of child sexual abuse also exploded on to the front pages in France in January after the daughter of former foreign minister Bernard Kouchner published a book accusing her step-father, prominent political commentator Olivier Duhamel, of having abused her twin brother as a child.