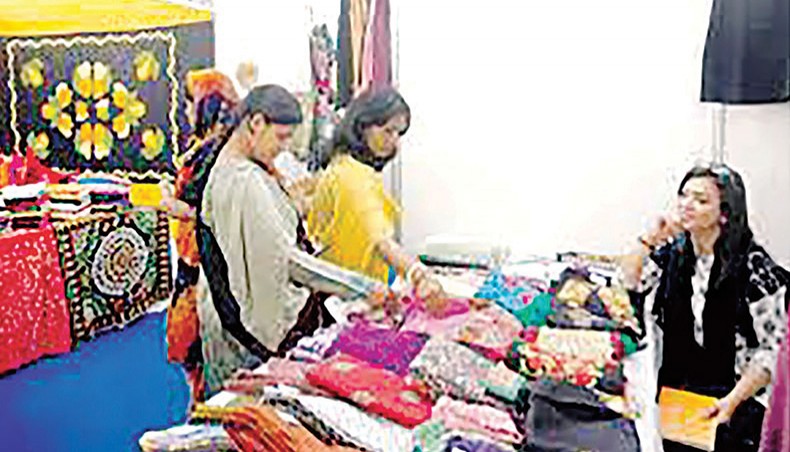 A file photo shows visitors browsing products at a stall at an SME fair held in Dhaka. Almost 59 per cent of women entrepreneurs in the cottage, micro, small and medium enterprise (CMSME) sector has not heard of the government stimulus packages for the sector, according to findings of a study conducted by the Centre for Policy Dialogue.— New Age photo

Almost 59 per cent of women entrepreneurs in the cottage, micro, small and medium enterprise (CMSME) sector has not heard of the government stimulus packages for the sector, according to findings of a study conducted by the Centre for Policy Dialogue.

Among the 58.6 per cent who had heard about the packages, only 7 per cent applied for loans under the packages, said the study titled ‘Impact of COVID-19 on Women Entrepreneurs: A Rapid Assessment from Bangladesh’.

According to the study, 87 per cent of women entrepreneurs in the CMSME sector think the government’s stimulus packages are not able to benefit their business operations.

The CPD revealed the findings of the study at a virtual dialogue titled ‘Socio-Economic Recovery Measures of the Government: How Much Women Have Benefitted’ jointly organised with UN Women.

CPD executive director Fahmida Khatun presented the findings of the study at the webinar.

She said that 93 per cent women entrepreneurs did not apply for loans under the stimulus as some thought the process was lengthy while others did not have information regarding where to go, what to do and how to apply for loan.

Banks officials also discouraged women entrepreneurs from applying and even created extra hassle for them.

Many women entrepreneurs did not apply for loans over concerns about repayment as their incomes had fallen and their businesses had contracted, she said.

As part of the study, the independent think-tank conducted a telephonic survey on 70 female entrepreneurs from 34 districts covering eight divisions of the country.

Fahmida said that the government’s COVID-19 liquidity support and fiscal stimulus packages had not been fully successful in addressing women entrepreneurs’ special needs during the pandemic as the packages were not designed keeping women in mind.

‘Women need cash handouts more than loans due to the economic downturn and the uncertainty regarding the future,’ she said, adding that fiscal measures would be more effective in easing the burden of the pandemic on women than monetary measures.

According to the survey, 41.4 per cent respondents said that they had to completely shut down their businesses while another 10 per cent entrepreneurs had been forced to reduce space or relocate their businesses to a smaller or cheaper site after the start of the pandemic.

As part of the study, the CPD also conducted key informant interviews (KIIs) with government officials, gender rights activists, bank officials and leaders of women chambers and commerce and trading associations and held expert group meetings with representatives from public and private sectors.

CPD found from the KIIs that the cases of rape, domestic violence by partners, violence against women, burden of unpaid care and domestic work and child marriage had increased during the pandemic.

It also found that women’s burden of unpaid care work had increased significantly during the COVID.

She stressed on providing training for women entrepreneurs and improving women’s access to finance.