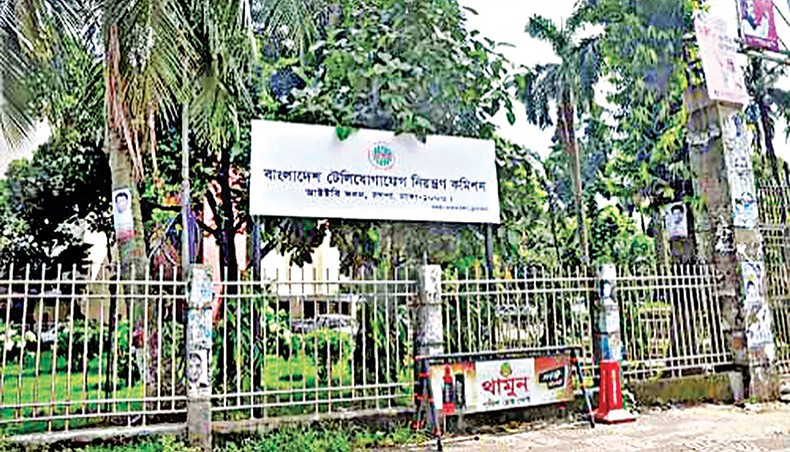 A file photo shows a signboard of the Bangladesh Telecommunication Regulatory Commission installed outside its office in Dhaka. — New Age photo

Subscribers of Banglalink, however, enjoyed the highest, 8.88 Mbps, 4G download speed, according to a BTRC report.

The state of 4G data speed of the telecom operators was revealed by the BTRC on Wednesday after conducting tests covering around 1,073 kilometres in Mymensingh, Jamalpur, Sherpur and Netrokona districts from March 21 to April 1.

The BTRC report came at a time when the telecommunication regulator drafted guidelines in January, 2021 on the launch of 5G service by the year 2023.

Banglalink chief corporate and regulatory affairs officer Taimur Rahman said, ‘Banglalink’s superior 4G performance in Mymensingh is reflective of the continuous efforts we are making to enhance our overall quality of services.’

State-owned Teletalk’s average 4G data download speed in Mymensingh was the lowest, 2.21 Mbps, among all the mobile phone operators.

In case of data, speed mostly depends upon the number of customers available within the site at a specific time, such as peak hours, place of conducting the drive test, he said, adding that high concentration of customers in a particular area at a particular time of an operator would naturally have adverse impact on data speed.

The commission on March 8, 2021 in an auction sold 27.4 megahertz of spectrum to the telecom operators to resolve the spectrum scarcity problem but still the operators are dissatisfied with the availability of spectrum at a suitable cost.

Apart from the 4G data download speed, the commission found call quality of Robi and Teletalk below the regulatory standards in the division.

GP, BL and Teletalk have also failed to maintain the call setup success rate set by the BTRC.

In terms of call drop rate, Banglalink’s rate was the lowest, 0.43 per cent, among the four operators.

‘According to the latest BTRC survey report, our call drop rate is within the BTRC limit,’ said GP head of external communications Md Hasan.

‘To ensure a better customer experience, Grameenphone is working relentlessly by modernising the network, rolling out new towers, has acquired additional spectrum, and keeping the network up and running amidst several fibre cuts due to roads-railways maintenance work and power outage incidents in different parts of the country,’ Hasan said.

In terms of call setup time, Teletalk failed to comply with the regulatory requirement of setting up calls within 7 seconds as the operator took 8.28 seconds to set up calls, the BTRC report said.