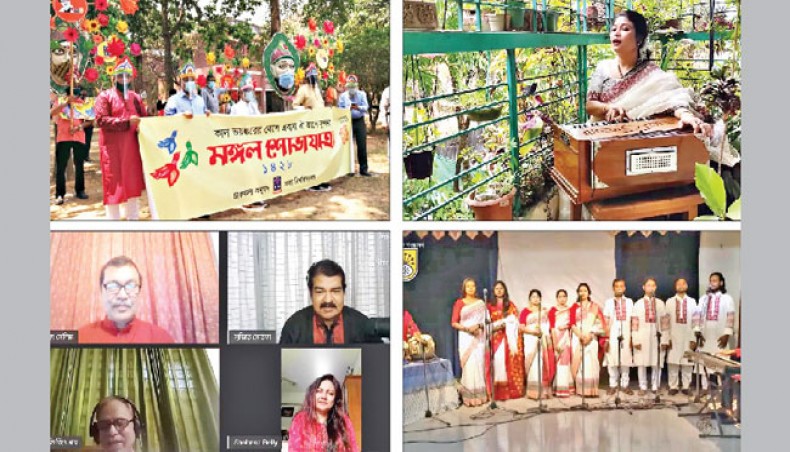 On April 7, the government asked all organisations and institutions not to celebrate Pahela Baishakh organising outdoor programmes due to a surge in COVID-19 cases.

Chhayanaut has been organising a comprehensive programme at Ramna Batamul in the capital to celebrate Pahela Baishakh every year since 1967. The organisation did not arrange the programme in 1971 during the War of Independence while in 2020 and 2021 the programme was cancelled at the venue due to the COVID-19 crisis.

Chhayanaut made a video compilation featuring the speech of Chhayanaut president Sanjida Khatun, compilations of chorus songs from the previous years’ programmes and some videos made this year by its artistes at indoor venues. The video was aired on different TV channels at 7:00am on the day and it was also uploaded on the organisation’s YouTube channel.

‘We are celebrating the golden jubilee of our motherland this year. We have been organising programmes at Ramna Batamul every year since 1967. We could not organise it in 1971 during the War of Independence. We had to organise online programmes in 2020 and this year due to the COVID-19 outbreak,’ said Sanjida Khatun.

‘We hope that the new year would bring light which would emerge out of the darkness. The new year will also bring a good message for everyone. The light must come,’ Sanjida added.

The programme included the presentation of solo songs and recitation, which were recorded indoors by Chhayanaut artistes this year, while chorus songs and the rendition of the national anthem were included from programmes held in 1422 and 1425 at Ramna Batamul.

The video compilation ended with the rendition of the national anthem.

Dhaka University authority brought out a symbolic Mangal Shobhajatra on a limited scale maintaining social distancing and health safety guidelines on the premises of the Faculty of Fine Art on Wednesday morning.

Besides, the university authority also made a video compilation for TV channels on the eve of Pahela Baishakh, which included speeches by Md Akhtaruzzaman, KM Khalid and Nisar Hossain along with some footages of Managal Shobhajatra.

Renowned singers Mahmud Selim, Sujit Mustafa and Shahnaz Beli were present as guests at the programme, which was anchored by the organisation’s general secretary Biswajit Roy.