The book fair that flopped 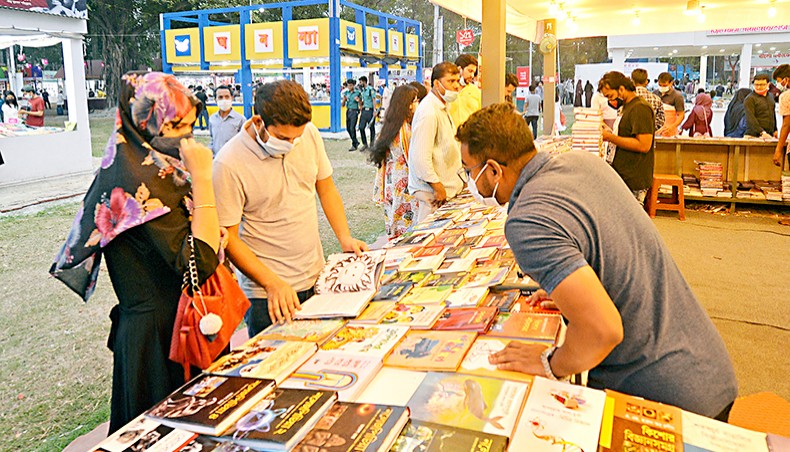 THE book fair, if I hedge on my bet which is what we editorially almost always do, almost flopped this year. The fair was meant to begin on the first of February. The COVID-19 reality, a number of decisions and indecisions of the fair organisers, the Bangla Academy and the Book Sellers and Publishers’ Association, and, perhaps, a lot of ministration, deferred its beginning till March 18. And it was to have ended on April 14.

The fair was to run for six hours beginning at 3:00pm every day but Fridays and Saturdays, when it was to run for 10 hours beginning at 11:00am. In view of an increased COVID-19 risk, the opening hour was shortened by an hour, beginning on March 31, for five hours from 3:00pm on weekdays and for nine hours from 11:00am at weekends. But the opening hour was further shortened the next day — for three hours and a half from 3:00pm on weekdays and seven hours and a half rom 11:00am at weekends.

The order of lockdown as a preventive measure against the COVID-19 infection, which began on April 5, had a longer opening hour for the fair, for five hours every day beginning from 12 noon, but with an initial restriction on vehicular traffic and a limited movement of pedestrians. The restriction, however, relaxed beginning on April 7, with public transports ready to run to half the passenger capacity for 12 hours from 6:00am.

Having gone through all this, the fair had to end on April 12, two days before the schedule, with a number of stalls having not opened for the last two days. The fair, which should not have taken place in hot, humid days of March–April, in fact, lost its attraction when the opening hour was shortened to three hours and a half and with no public transports on the road. The ending days of the fair painted a bleak picture, especially for the publishers and writers.

On one such day, a writer singed books at a stall that some people standing in queues bought with the money that the publisher handed in. The writer pleaded ignorance, not in public but to the reporter, and the publisher explained it by way of his magnanimity to help readers, willing to read but not equipped enough with money.

This is not a unique case as similar incidents took place in the past. But this certainly tells the sorry tale of the fair. The publisher may have wanted to please the writer, who visited the stall. This could also be a joint venture. The fair that continued in such a dying state prompted a few writers and poets, perhaps a handful, who sold quite well in the past to give posting on Facebook saying that one of them had three copies of his book sold at the fair and another had none of the copies sold.

All this speaks of the experiences of the Bangla Academy, which became engaged in the management of the book fair in 1978 laying out the official holding of the fair the next year onwards, that have hardly lent the academy any insight into the management of such a fair even after so many years.

I have hardly had the privilege of being a designated reporter, or a correspondent, but from July 2001 to January 2003 when I had worked with the Weekly Holiday before New Age came out. After a search through all my reports on the book fair, five in all that I have been able to salvage from old newspapers, one of them, which came out in the Weekly Holiday in the first week of February 2002, says, in an early paragraph, ‘In the first five days of the fair that opened on February 1…’ and the report, in the succeeding paragraph says, ‘… some big names… are still hoping for a rise in sales, since the fair will be running up to February 21.’ The fair then spanned 21 days.

The fair used to begin, as far as I can remember, on February 7 in the late 1980s and I still vividly remember having roamed about, along with a friend a year senior to me, all of the Suhrawardy Udyan and the Ramna Park the whole night in the early 1990s after everything of the fair had closed at nine o’clock or so in the night past February 20. That used to be the end of it and publishers would remove all their objects and articles the next afternoon.

My report on the fair next year says, ‘… the fair, which will be running till the last day from the first of the month with a break of five days from February 11 for… Eid ul Adha, seems to be drawing a large number of visitors, especially from the evening.’ This was, perhaps, the beginning of the fair having spanned the whole of February, which later gained ground and became a norm.

The origin of the book fair is said to have its origin in efforts of Chittaranjan Saha, the founder of Swadhin Bangla Sahitya Kendra, which had by then published 32 books written by Bangladeshis who then took refuge in India during the liberation war. It was on February 8, 1972. But what he did in 1972, displaying books on a piece of jute cloth and selling them at the Bangla Academy, was hardly a book fair but Swadhin Bangla Sahitya Parishad had by then became Muktadhara.

Chittaranjan Saha also came to be joined in by a few others from 1976 till 1978, The Bangla Academy, in the meantime, is reported to have made an arrangement for the sales of the academy’s books at a discount for a week from February 15 in 1973. The academy is also reported to have held the national literary convention on February 14, 1974, along with an arrangement for the sales of books, with a few other publishers having been around.

The Bangla Academy came to be involved in organising the book fair in 1978 and the Bangladesh Book Sellers and Publishers’ Association, which was also organised by Chittaranjan Saha, joined the process in 1979, when the fair, Ekushey Granthamela, is said to have spanned 21 days, beginning on February 7. The duration of the fair was shortened to 14 days in 1981. Amidst demands of the publishers and sellers, the academy ran the fair for 21 days. The National Book Centre is reported to have been party to the holding of the fair that year.

The Bangla Academy stopped having the National Book Centre as a partner in 1983, giving out no reasons. It renamed the fair as Amar Ekushey Granthamela, which took a few years to get ground. But the academy had to stop holding the fair immediately before the inauguration, on February 14, as the police fired into students who were holding protests against the education policy, the Majid Khan education policy, near the education ministry building, leaving two dead. The incident, the first major opposition to the military regime of HM Ershad, marked the beginning of anti-autocracy movement.

Amar Ekushey Granthamela, from February 7 to February 21, was held in a big way in 1984. The fair kept growing, in the number of stalls, in the number of publishers participating and in the number of visitors. The demand for stalls in the fair by publishers, logically and illogically, and an increased number of visitors prompted the Bangla Academy to bring the main fair out of the academy premises onto Suhrawardy Udyan. The academy premises primarily housed government, semi-government and autonomous institutions and non-governmental organisations and Suhrawardy Udyan housed other stalls.

The fair, then limited to the academy premises which housed stalls other than books’ even in the early 1990s, allowed shops of objects and articles, from household to food, lined along the road going by the academy, from Doyel Square to the TSC. People could walk in without being checked and without needing to walk slowly in queues, amble around stalls to buy books, sit on the grass in circles, chat for hours, stop short to stare at people hurrying by, sing aloud in groups and, even, dance.

The academy stopped allowing stalls other than books’ in the mid-1990s and later put in additional efforts to keep the road clear of eateries, craft shops and stalls promising to teach Standard Colloquial Bangla pronunciation, with cassettes of recitation of poems. The academy finally could do all it intended — a book fair free of stalls other than books — in 1997–1998. The fair finally grew bigger, apparently beyond a managed holding by the academy and beyond the stamina of not-so-extraordinary visitors.

The book fair gradually became obsessed with growth, with the number of stalls taking part growing more each year and with the number of books hitting the stalls more each year. Even the production quality, which by no means warrants the talent of the writers, poets, essayists and researchers, mostly declines as publishers wait for the seasons and try to roll out the books hurriedly as the fair knocks on the door. Books now even hit the stalls on the day the fair ends.

The charm that the fair held in the early 1990s has now been all lost, perhaps to the liking of people who want to visit the fair and want others to do so for books. The fair has for some years now put on a corporate look, with automated teller machines, with base transceivers of mobile companies and with adverts that are louder than books. Yet people buy books and the people who want to buy books visit the fair in the last seven to 10 days of the fair.

People this time could hardly visit the fair in its ending days because of the COVID-19 restrictions that limited traffic movement on the road yet extended the opening hour. The holding of the fair this year caused losses to the publishers, sellers and readers, laying bare the short-sightedness of the Bangla Academy. Publishers should learn not to bring out all their titles at the time of book fair and they should devise alternative ways to sell books to readers round the year. The academy should learn how to hold the book fair online. If it had so done, the sales proceeds would certainly have well exceeded what they were this fair.