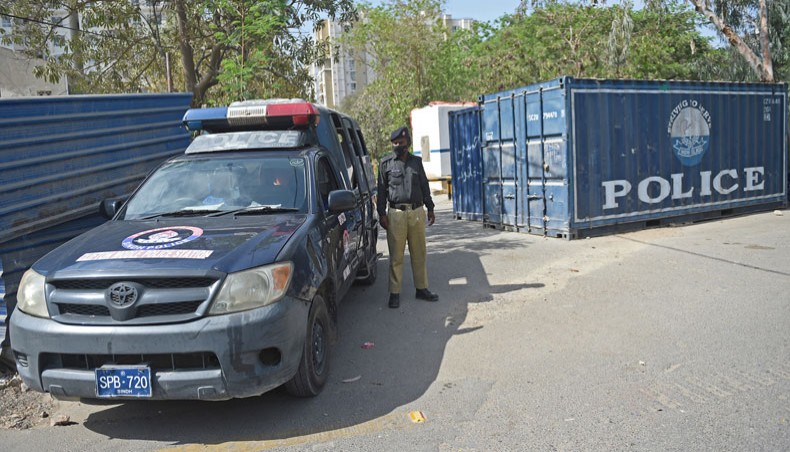 The police stand guard near the French Consulate building to beef up security following a protest by extremist political party Tehreek-e-Labbaik Pakistan, in Karachi on April 15, 2021. — AFP Photo

The French embassy in Pakistan on Thursday advised all French nationals and companies to temporarily leave the country, after violent anti-France protests paralysed large parts of the country this week.

‘Due to the serious threats to French interests in Pakistan, French nationals and French companies are advised to temporarily leave the country,’ the embassy said in an email to French citizens.

‘The departures will be carried out by existing commercial airlines.’

Anti-French sentiment has been simmering for months in Pakistan since the government of president Emmanuel Macron expressed support for a satirical magazine’s right to republish cartoons depicting Prophet Mohammed—deemed blasphemous by many Muslims.

On Wednesday, the Pakistani government moved to ban an extremist political party whose leader had called for the expulsion of the French ambassador.

Saad Rizvi, leader of Tehreek-e-Labbaik Pakistan, was detained hours after making his demands, bringing thousands of his supporters to the streets in cities across Pakistan.

Two police officers died in the clashes, during which water cannon, tear gas and rubber bullets were used to hold back crowds.

This week extra security personnel have been deployed to the French embassy, which is inside a guarded diplomatic enclave closed off to the public, and around four shipping containers placed on its outer wall.

Ludo Van Vooren, a French citizen living in Islamabad, told AFP he was assessing the advice.

‘We are a little shocked and reflecting on what to do,’ he said. ‘Following the incidents of the last few months, we haven’t been panicking but we are very vigilant. Now we are trying to work out if things have changed.’

Last year around 445 French citizens and more than 30 French companies were registered in Pakistan, according to a French government website.

The TLP is notorious for holding days-long, violent road protests over blasphemy issues, causing major disruption to the country.

Blasphemy is a hugely sensitive issue in conservative Pakistan, where laws allow for the death penalty to be used on anyone deemed to have insulted Islam or Islamic figures.

Successive governments have a long history of avoiding confrontation with hardline Islamist groups, fearing any crackdown on religious parties could spark wider violence.

‘We are in favour of protecting the Prophet’s honour, but the demand which they are seeking could have portrayed Pakistan as a radical nation worldwide,’ Interior Minister Sheikh Rashid Ahmed told a news conference on Wednesday.

On Twitter, the hashtag ‘#FranceLeavePakistan’ was trending with more than 55,000 tweets as of Thursday afternoon.

Macron’s subsequent defence of free speech triggered anger across the Muslim world, with tens of thousands in Pakistan, neighbouring Iran and other Muslim countries flooding the streets and organizing anti-French boycotts.

TLP supporters brought the capital Islamabad to a standstill.

At the time, prime minister Imran Khan, a populist leader who has been known to play to Pakistan’s hardline religious base, blasted Charlie Hebdo for re-publishing the cartoons, saying ‘wilful provocations’ should be ‘universally outlawed’.

He accused the French president of attacking the Muslim faith and urged Islamic countries to work together to counter what he called growing repression in Europe.