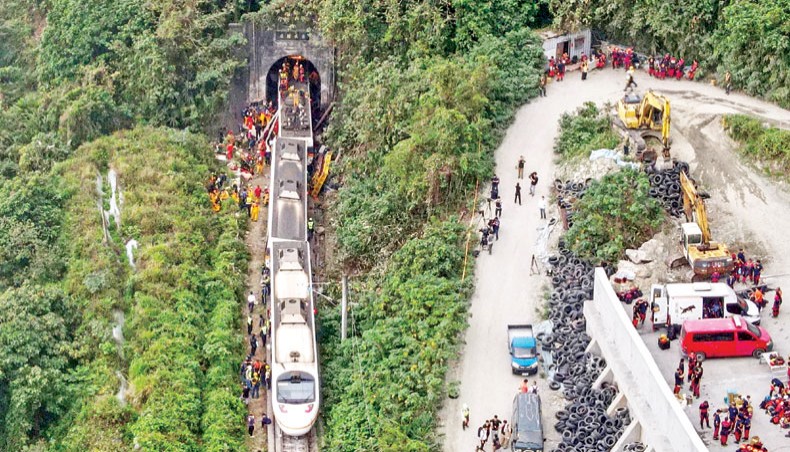 An aerial view shows rescue workers at the site where a train derailed inside a tunnel in the mountains of Hualien, eastern Taiwan on April 2, 2021. — AFP photo

Taiwan’s government on Thursday said it had accepted the resignation of its transport minister following a train crash earlier this month that killed 49 people, the island’s deadliest in decades.

The 2 April crash was caused by a railway maintenance truck that slid down an embankment and onto the track moments before a high-speed train passed by.

The accident, which left more than 200 injured, plunged Taiwan into mourning.

Transport minister Lin Chia-lung offered his resignation the day after the crash but the government did not accept it, saying he was needed to concentrate on the rescue effort and subsequent investigation.

However, that changed on Thursday with Premier Su Tseng-chang agreeing to let Lin step down.

A memorial service for those killed in the crash was held in Taipei on Thursday and Lin was among officials in attendance.

Authorities gave different death tolls in the days after the crash —partly because so many body parts had to be identified — but earlier this week they settled on 49 and said all victims had now been accounted for.

One French national and two Americans were among those killed.

The driver of the maintenance truck has been held in custody.

Prosecutors are working to determine whether the driver failed to secure the parking brake or if the truck suffered a mechanical failure.