US cop arrested after protests on second-degree murder charges 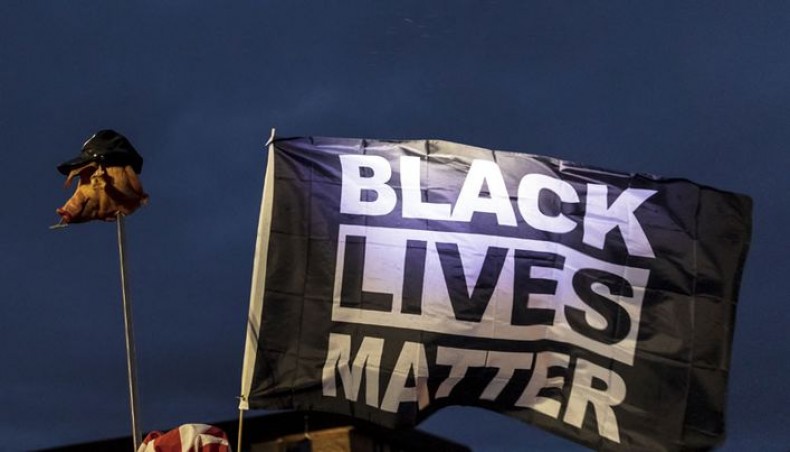 Demonstrators brandish a pig's head on a pike and fly a Black Lives Matter flag outside the Brooklyn Centre police station while protesting the death of Daunte Wright who was shot and killed by a police officer in Brooklyn Center, Minnesota on April 14, 2021. -- AFP photo

The United States police officer who shot dead Black 20-year-old Daunte Wright in a Minneapolis suburb after appearing to mistake her gun for her Taser was arrested on Wednesday on manslaughter charges.

Minneapolis has been roiled by nightly violent protests after Kim Potter, who is white, opened fire on Wright in his car on Sunday.

Racial tensions were already high in the Midwestern US city as it hosts the trial of the white policeman charged with murdering George Floyd, whose death touched off a national reckoning over racial injustice.

Potter, a 26-year police veteran who resigned after Wright’s death, faces a maximum of 10 years in jail if convicted of second-degree manslaughter.

She is due to appear in court Thursday for a preliminary hearing after being released on a $100,000 bail, according to local media.

‘While we appreciate that the district attorney is pursuing justice for Daunte, no conviction can give the Wright family their loved one back,’ said the Wrights’ family lawyer Ben Crump after the arrest.

‘This was no accident. This was an intentional, deliberate, and unlawful use of force.’

‘We will keep fighting for justice for Daunte, for his family, and for all marginalized people of color.’

Protesters faced off with police for a fourth night of violent clashes on Wednesday evening.

About nine miles away, the judge presiding over the trial of Derek Chauvin denied a defense motion earlier Wednesday to acquit him of murder and manslaughter charges for the death of Floyd.

Chauvin, who is white, was seen in a video taken by a bystander kneeling on Floyd’s neck for more than nine minutes as the handcuffed 46-year-old complained repeatedly that he ‘can’t breathe.’

Defense attorney Eric Nelson said prosecutors had failed to prove their case against the 45-year-old Chauvin beyond a reasonable doubt and he should be acquitted.

The video of Floyd’s May 25, 2020 arrest sparked protests against racial injustice and police brutality in the United States and around the world.

A forensic pathologist called by the defense on Wednesday said Floyd died from cardiac arrest brought on by heart disease, illegal drug use and other factors.

The testimony of David Fowler contradicted that of several medical experts put on the witness stand by the prosecution who said Floyd died of lack of oxygen while being held facedown on the ground.

On Tuesday the families of Wright and Floyd demanded an end to police brutality and the killing of unarmed African Americans by white officers.

‘The world is traumatized watching another African American man being slain,’ Floyd’s brother Philonise Floyd said, as he stood with Wright’s relatives outside the trial courthouse.

Chyna Whitaker, the mother of Wright’s one-year-old son, and Wright’s own mother Katie Wright spoke emotionally about the last times they talked with or saw Daunte.

Body camera footage showed officers pulling Wright out of his car after stopping him for a traffic violation and discovering he had an outstanding warrant.

When officers attempt to handcuff Wright, he scuffles with them and gets back in the car. Potter shouts, ‘Taser! Taser! Taser!’ but a gunshot is then heard.

The local county attorney said Potter, 48, had drawn her Glock 9mm handgun with her right hand.

‘These situations show the over-policing that is done in the black community,’ said long-time civil rights activist Al Sharpton.

Imran Ali, Washington County assistant criminal division chief, vowed he would ‘vigorously prosecute this case and intend to prove that Officer Potter abrogated her responsibility to protect the public when she used her firearm rather than her Taser.’

‘Certain occupations carry an immense responsibility, and none more so than a sworn police officer,’ he added.

Concrete blocks and fences were erected around Potter’s family home north of Brooklyn Center, with police vehicles patrolling the streets after protesters threatened to attack the property.