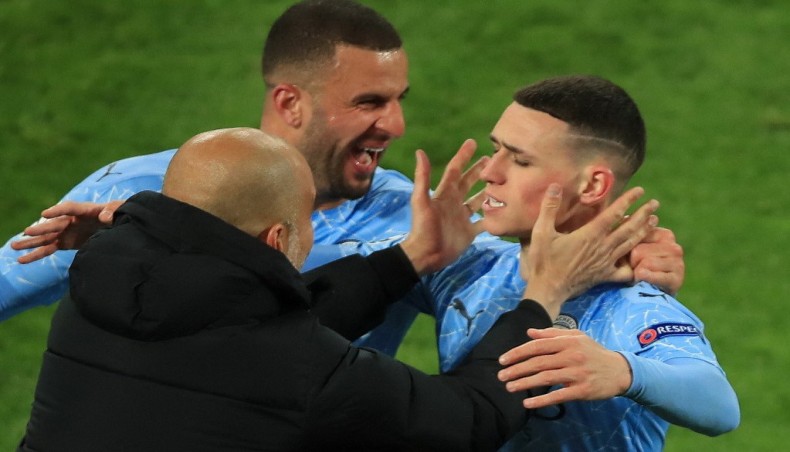 Manchester City set up a blockbuster Champions League semi-final against Paris Saint-Germain as Phil Foden's second-half winner sealed a 2-1 victory at Borussia Dortmund on Wednesday to send the Premier League leaders through 4-2 on aggregate.

City had bowed out at the quarter-final stage in each of the last three seasons, and had to come from behind at Signal Iduna Park as Dortmund shrugged off their indifferent Bundesliga form to take the lead on 15 minutes.

Four days after scoring his first Bundesliga goal, Bellingham also hit the back of the net for the first time in the Champions League.

After Mahmoud Dahoud fired straight at City goalkeeper Ederson with six minutes gone, Dortmund went ahead with their next clear chance.

Emre Can's long ball found Erling Braut Haaland in the area, the Norwegian squaring for Dahoud, and although his shot was saved, Bellingham curled the rebound beyond Ederson.

At 17 years and 289 days, Bellingham became the second youngest goal-scorer in the knockout stages of the Champions League behind Bojan Krkic, who was 72 days younger when he scored in the quarter-finals for Barcelona in 2008.

Dortmund goalkeeper Marvin Hitz pulled off saves at point-blank range to deny a Foden shot and a header by Oleksandr Zinchenko, while Bellingham got back to block a Riyad Mahrez attempt.

Can looked crestfallen when he gave away the penalty 10 minutes after the break by heading a corner onto his own arm.

Mahrez converted the spot-kick by slamming the ball beyond Hitz.

The Algeria midfielder's fist-clenched celebration showed what the away goal meant to City before he being mobbed by his team-mates.

The winning goal came with 15 minutes to go when Mahrez took a short corner with Bernardo Silva, who found Foden on the edge of the penalty area.

The 20-year-old hit his shot left-footed shot low past Hitz and in off the post before sprinting to celebrate with Guardiola on the sidelines.

It was a quiet night for Dortmund top-scorer Haaland, who has now failed to score in his last seven games for club and country.

The tall Norwegian trudged off after the final whistle while City captain De Bruyne was just one of his team's stars who punched the air in celebration.