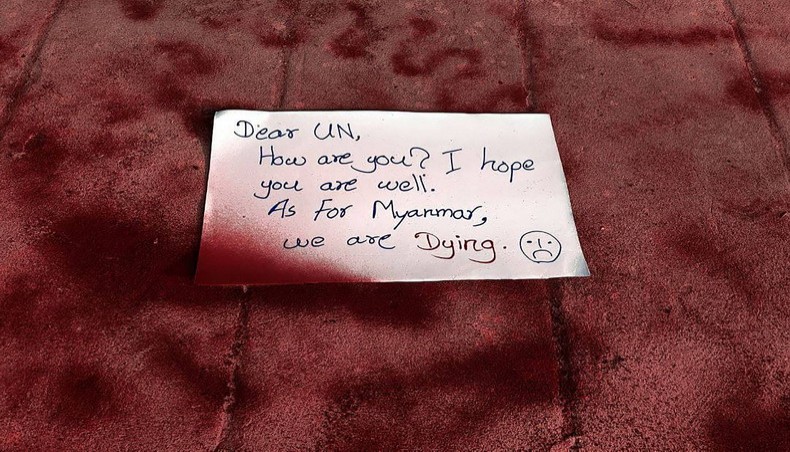 This photo taken and received courtesy of an anonymous source via Facebook on April 14, 2021 shows a protest sign appealing to the United Nations on red spray paint on the ground as part of a ‘bleeding strike’ demonstration against the military coup in East Dagon township in Yangon.  -- AFP

Anti-coup protesters in Myanmar sloshed red paint in the streets on Wednesday to symbolise the blood spilled and more than 700 lives lost in a brutal military crackdown.

The country is barely functioning and the economy has stalled since the military seized power from civilian leader Aung San Suu Kyi on February 1.

The military junta has sought to quell mass protests with lethal force and a local monitoring group has verified at least 714 civilian deaths but warns the toll is likely to be even higher.

This week is Myanmar's New Year festival of Thingyan holiday but normal festivities such as public water fights have been cancelled.

Instead, protesters have been using Thingyan as a rallying point -- as bus shelters and pavements were sprayed red on Wednesday in cities and towns nationwide.

‘The purpose of the 'bleeding strike' is to remember the martyrs who died in the struggle for democracy,’ a protest participant from Yangon told AFP.

‘We should not be happy during this festival time. We have to feel sadness for the martyrs who are bleeding and we must continue to fight this battle in any way we can.’

In Mandalay, red paint was also spilled on the streets amid signs saying: ‘hope our military dictatorship fails,’ ‘overthrow the era of fear’ and ‘blood has not dried on the streets’.

Protesters spray-painted a pavement red in a Yangon suburb and left a note that read: ‘Dear UN, How are you? I hope you are well. As for Myanmar, we are dying.’

The United Nations human rights chief warned Tuesday that Myanmar could be spiralling towards a ‘full-blown’ Syrian-style conflict.

Flagging of possible crimes against humanity, the High Commissioner for Human Rights Michelle Bachelet urged countries to take immediate action to push Myanmar's military to stop its ‘campaign of repression and slaughter of its people.’

‘I fear the situation in Myanmar is heading towards a full-blown conflict,’ Bachelet said in a statement.

‘There are clear echoes of Syria in 2011,’ she warned, referring to the start of a civil war that over the past decade has killed around 400,000 people and forced more than six million to flee the country.

The bloody crackdown has brought widespread international condemnation and calls for restraint -- as well as sanctions from some countries on the Myanmar armed forces and their extensive business interests.

But diplomatic bickering has stalled concrete action, with the EU's top diplomat blaming Moscow and Beijing for blocking tough measures, such as a UN arms embargo.

At a military tribunal in Yangon, seven protesters accused over the murder of a suspected informer were sentenced to death, state media said Tuesday. Three of the demonstrators were tried in absentia.

The junta also announced Tuesday that dozens more people had been added to an arrest warrant list of 260 celebrities, doctors and ordinary citizens.

Many are accused of spreading dissent against the military, while medical professionals are wanted over their work at private clinics, which have taken in injured protesters, according to state media.

Meanwhile, in northwestern Sagaing region, a couple were shot dead while delivering milk after junta troops stormed the town of Tamu, according to the Assistance Association for Political Prisoners (AAPP), a local monitoring organisation.