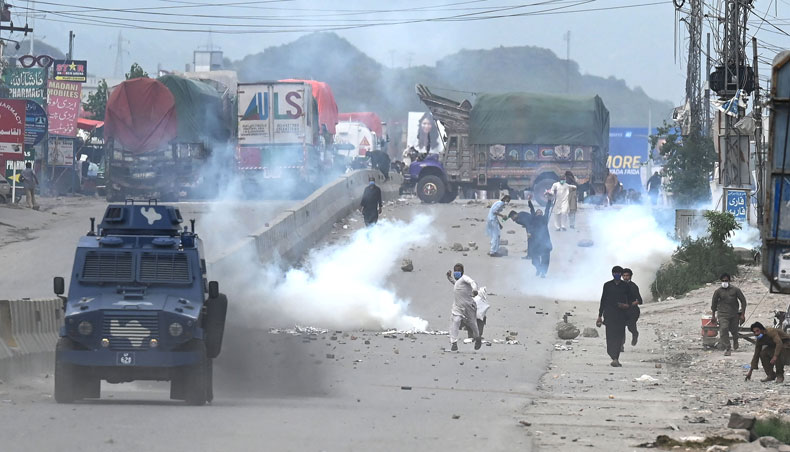 Supporters of Tehreek-e-Labbaik Pakistan party throw stones over the police armoured vehicle during a protest against the arrest of their leader as he was demanding the expulsion of the French ambassador over depictions of Prophet Muhammad, in Barakahu neighbourhood of Islamabad on April 13, 2021. — AFP photo

Thousands of supporters of a Pakistan extremist party clashed with police for a second day on Tuesday, demanding the release of their leader who was arrested after calling for the French ambassador to be kicked out of the country.

Police said two officers died after being wounded in clashes in Lahore, the country’s second-biggest city, while the Tehreek-e-Labbaik Pakistan said three of its supporters were killed.

Police have not commented on the reported TLP deaths.

Protesters spilled into the streets in anger at Monday’s arrest of TLP leader Saad Rizvi, with major intersections also blocked in the capital Islamabad.

Rizvi was taken into custody hours after calling for a march next week on the capital to again demand the expulsion of the ambassador over France’s support for a magazine’s right to republish cartoons of the Prophet Mohammed – an act deemed blasphemous by many Muslims.

Police said on Tuesday that he had been charged under anti-terrorism laws.

‘A group or party shouldn’t even think of dictating the state’s policy,’ Fawad Chaudhry, the science and technology minister, told reporters, calling for the protests to be resolved peacefully.

Health officials in Punjab province, of which Lahore is the capital, have appealed to protesters not to disrupt critical oxygen supplies for COVID-19 patients.

‘Please do not block roads for ambulances and for visitors to the hospitals. Some ambulances are carrying oxygen cylinders, which are extremely essential for Covid patients,’ leading Punjab health official Yasmin Rashid said, after calling Monday night’s disruption a ‘crisis’.

Pakistan is in the grip of a deadly third wave of the coronavirus pandemic with a shortage of vaccines.

The TLP are notorious for days-long road protests that have brought large swathes of the country to a standstill over the years.

The nation has a long history of avoiding confrontation with hard-line Islamist groups, fearing any crackdown on religious parties could spark wider violence in the deeply conservative Islamic republic.

Rizvi is the son of a firebrand cleric and previous head of the TLP, Khadim Hussain Rizvi, who died in November after leading massive anti-France demonstrations across Pakistan.

During those protests, TLP supporters brought the capital to a standstill for three days that saw heavy street fighting and pushed authorities to cut mobile phone coverage in Islamabad and surrounding areas.

The demonstrations ended after a meeting between the government and party leaders, who claimed Islamabad had agreed to expel the French ambassador.

The government has never acknowledged any such agreement.