Pfizer on delivering 10pc more vaccines by end of May 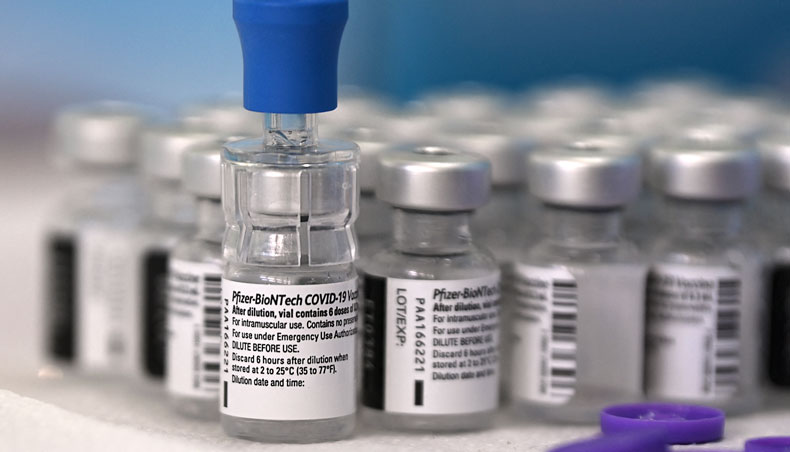 Picture of vials of the Pfizer-BioNTech vaccine against COVID-19 taken as elderly people are being inoculated amid the novel coronavirus pandemic, at the Belisario Porras school San Francisco neighbourhood in Panama City on March 4, 2021. — AFP photo

Pfizer has ‘ramped up production’ of its COVID-19 vaccine and can deliver 10 per cent more doses than expected to the United States by the end of May, its CEO Albert Bourla said on Tuesday.

That would bring its delivery by the end of next month to 220 million doses, and Bourla said on Twitter the pharmaceutical giant can also ‘supply the full 300 million agreed on for the end of July two weeks early.’

The news comes after US health authorities earlier in the day called for a pause on the use of Johnson & Johnson’s COVID-19 vaccine, after six women between age 18 and 48 developed a rare type of blood clot that left one dead and another in critical condition.

The White House said it was confident there would be no ‘significant impact’ on the vaccination plan in the world’s hardest-hit country, where almost half of all adults have now received at least one dose.

Jeff Zients, president Joe Biden’s COVID-19 response coordinator, said that a huge surplus in the supply of two other vaccines — Pfizer and Moderna — meant the country could easily take up the slack.

Biden has promised doses would be available for all adults in the country by the end of May, and in addition to the doses of the Pfizer vaccine developed with German firm BioNTech, Washington has also ordered 300 million doses of Moderna’s jab.

The United States had ordered 100 million doses from Johnson & Johnson.