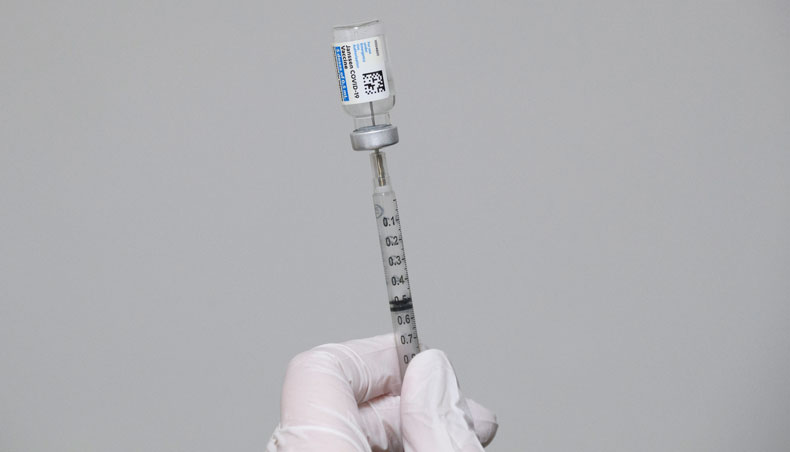 In this file photo a syringe is filled with a dose of the Johnson & Johnson Janssen COVID-19 vaccine at a vaccination site organised by the United Farm Workers, Kern Medical, the Kern County Latino COVID-19 Task Force inside Reuther Hall at Forty Acres on March 13, 2021 in Delano, California. — AFP photo

US health authorities have recommended pausing the Johnson & Johnson COVID-19 shot over blood clot fears, with the company announcing it would delay its European rollout in a setback for global immunisation efforts.

Out of nearly seven million Americans who have so far received the single-dose vaccine, six women between age 18 and 48 developed a rare type of clot in the brain, officials said.

One later died, while another is in critical condition.

US Food and Drug Administration scientist Peter Marks has said the disorder might be triggered by a rare immune response to the vaccine similar to that seen in a few hundred recipients of the AstraZeneca jab in Europe.

‘We have made the decision to proactively delay the rollout of our vaccine in Europe,’ J&J said.

US authorities are conducting a probe which could result in tough regulatory choices, such as restricting the J&J vaccine to older people.

People who have received the shot within the past three weeks were asked to report to their doctors if they experienced severe headaches, abdominal pain, leg pain or shortness of breath.

The White House said it was confident there would be no ‘significant impact’ on vaccination plans in the world’s hardest-hit country, where almost half of all adults have now received at least one dose.

Meanwhile in Germany, people under the age of 60 who have received a first dose of the Oxford-AstraZeneca vaccine will receive a different jab for their second dose, federal and regional health ministers said.

Germany has suspended distribution of the two-dose vaccine to people under 60 due to concerns over a possible link to rare blood clot cases.

But while J&J paused output, Pfizer said it increased production and could deliver 10 percent more doses than expected to the United States by the end of May.

That would bring its delivery by the end of next month to 220 million doses, its CEO Albert Bourla said, adding that it can also ‘supply the full 300 million agreed on two weeks early.’

South Africa also suspended its J&J shot rollout, delaying an already sluggish campaign which has so far only administered this vaccine.

But the European Medicines Agency said it was continuing to carry out its own investigation, and Canada’s prime minister Justin Trudeau said his country still expected its first shipment of the shot by the end of April.

More than 800 million vaccine doses have now been administered globally, according to an AFP tally.

The total number of virus deaths is approaching three million, as the World Health Organisation warned infections are rising exponentially despite efforts aimed at stopping them.

Muslims around the world began Ramadan on Tuesday, with many countries facing virus restrictions.

Mosques in the world’s most populous Muslim-majority nation, Indonesia, are only be able to host people at a maximum of 50 per cent capacity. Worshippers must wear masks and bring their own prayer mats.

In Saudi Arabia, mask-clad worshippers entered Mecca’s Grand Mosque in batches to perform the ritual of circling the sacred Kaaba, a cubic structure towards which Muslims around the world pray.

Only immunised pilgrims are eligible for permits to perform the pilgrimage and to attend prayers in the Grand Mosque during Ramadan, the hajj and umrah ministry announced.

India was given a boost as it authorised Russia’s Sputnik V COVID-19 drug, in a bid to fight a record surge that has prompted officials to impose night-time curfews.

The country on Monday reported more than 161,000 new cases – the seventh consecutive day that more than 100,000 infections have been recorded.

It has now surpassed Brazil to become the world’s second most affected country.

Meanwhile, the virus is spreading like wildfire in Latin America.

France has suspended all flights from Brazil to curb the spread of a new variant found there.

Brazil’s neighbour Argentina set a new record of 27,000 cases in one day on Tuesday.

‘We are facing a great increase in the speed of transmission of the virus with the appearance of new variants,’ said Analia Rearte with Argentina’s Society of Vaccination and Epidemiology after an emergency meeting with experts and top government officials.

In Colombia, president Ivan Duque said that nearly 12 million people would be placed under a weekend lockdown in four cities in an attempt to curb the virus transmission.

Maria Van Kerkhove, the WHO’s technical lead on COVID-19, said the world was now at a ‘critical point’ of the pandemic as cases once again grow exponentially.

The organisation also called for a halt to the sale of live wild mammals in food markets to prevent the emergence of new types of coronavirus.