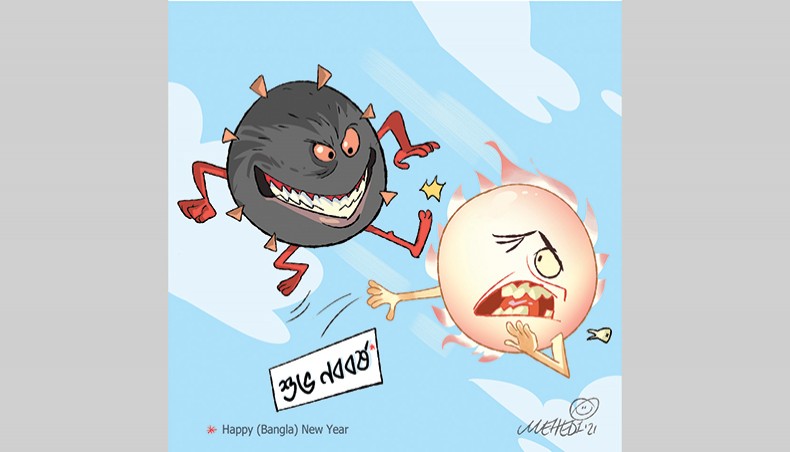 The nation celebrates Pahela Baishakh, the first day of Bangla New Year 1428, today amid the fresh beginning of a weeklong nationwide shutdown to mitigate the severity of COVID-19 outbreak.

Pahela Baishakh, which is the first day of the first Bengali month, is a public holiday.

The government for the second consecutive year has cancelled outdoor celebrations centring on Bangla New Year while the Dhaka University authorities said there would be no Mangal ShobhaJatra in persons on the campus due to the COVID-19 situation.

As the government on Monday announced the closure of all government and non-government offices and financial institutions for eight days, there will not be any open-air cultural programme, fair, nor even the opening of halkhatas, new ledgers after closing last year’s accounts, which businesses have been observing for many decades to welcome Bangla New Year.

However, the Dhaka University authority, Chhayanaut and a few other organisations will organise symbolic Mangal Shobhajatra and musical soirees which the television stations begin broadcasting from the morning. The live open-air programmes at the Ramna, Dhaka University, Dhanmondi, Uttara and various other points in the capital and other district towns have all been suspended.

‘Considering the public health issue we decided to make an hour-long programme to be aired on BTV at 8:00am today comprising 14 songs and a speech of the Chhayanaut chairperson Sanjida Khatun, said Laisa Ahmed Lisa, general secretary of Chhayanaut.

‘We have selected some songs of Rabindranath Tagore, Kazi Nazrul Islam and other major poet-lyricists under the theme of moving forward,’ Lisa said, adding that the show would also be streamed on Chhayanaut’s YouTube channel.

Dhaka University fine arts faculty dean Nisar Hossain said that the university authority has made a five-minute video on Mangal Shobha Jatra, which UNESCO inscribed on the list of intangible cultural heritage, which would be aired by all the TV channels after the end of the Chhayanaut show at 9:00am today.

The theme of the Mangal Shobhajatra was lifted from a poem by poet Nazrul entitled ‘Kal Bhayankarer rupe ebar oi ashe sundar’ to inspire people to move forward overcoming all odds, Nisar explained. ‘Our artworks to be displayed at the procession will also represent the ongoing COVID-19 situation maintaining its original flavour,’ he added.

Various other organisations will also hold programmes marking the day on the online platforms.

Apart from 1971, the year of the liberation war, Pahela Baishakh had been celebrated since its introduction by the Mughal Emperor Akbar in 1556,’ the Ekushey Padak-winning folklorist Shamsuzzaman Khan said.

‘Since then it became a part of our tradition and later assumed a unique expression of Bengali culture during the Pakistani rule, especially after the language movement in 1952,’ he added.