Nababarsha celebration over the years 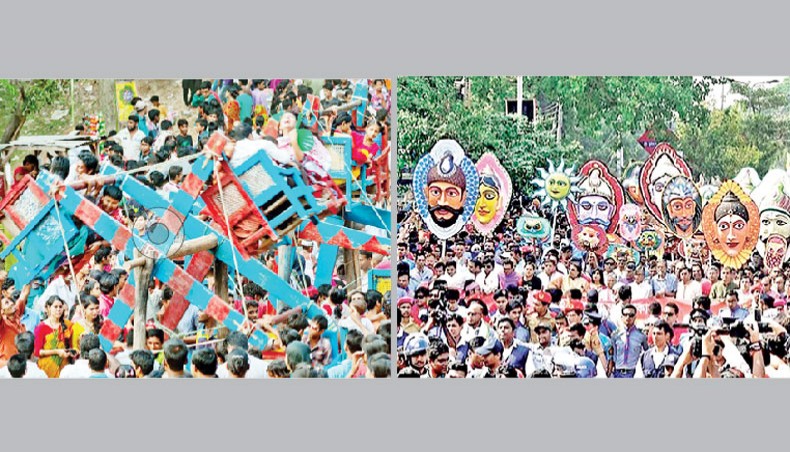 Nababarsha or Bangla New Year celebration has assumed a new dimension in the last three or so decades. In urban centres across the country, people, regardless of class, religion and regional diversities, have embraced Mangal Shobhajatra and cultural programmes in the vein of Chhayanaut’s solemnising event at Ramna Batamul as key markers of Bengali nationalism.

For the second consecutive year, New Year celebrations will be restricted to online and TV programmes due to an unprecedented surge in COVID-19 cases.

Mangal Shobhajatra, the UNESCO enlisted cultural expression, in which people in colourful attire carry various props, including giant masks and folk motifs, saw its modest beginning in the mid-1980s.

Mahbub Zamal Shamim and Heronmoy Chanda of Charupeeth arranged the first colourful mask and prop procession with their students as participants in Jashore back in1985, according to a 2017 interview by artist and Dhaka University’s art faculty dean Professor Nisar Hossain.

As for Chhayanaut, its music platform was established on Bangla New Year in 1963 and, since inception, its programmes were aimed at ‘preserving what it perceived as Bengali tradition’, which should translate as Bengali modern tradition with an emphasis on preserving and promoting Rabindranath Tagore’s songs. It was during the Pakistan era, when the military junta slapped a ban on Rabindra Sangeet in 1965, terming Tagore songs un-Islamic, that Chhayanaut began its cultural activism to reclaim the Nobel laureate’s body of work as a common inheritance of the Bengalis.

In the past few decades, Chhayanaut and the faculty of fine art hogged the limelight, overshadowing the rural cultural traditions cast around folk rituals, melas and rural sports such as boat races and bull races as well as bull fights.

For the Alpha males, there used to be events of wrestling and lathi khela, or stick fighting, in some regions.

The boat races on myriad rivers across the country’, including the Buriganga, was perhaps the first spectacular event that attracted national attention before the spectacles of Mangal Shobhajatra started to fill the front page of national dailies.

But, the most unusual ritual in the rural traditional repertoire has been, and still is, Charak, a folk ritual that begins on the last day of Bangla year, which is the last day of the month of Chaitra. Charak puja, which seeks to ‘wipe out all the sufferings and pains of the existing year,’ is an extreme form of performance in which devotees of Shiva are wheeled around while their bodies remain suspended by hooks and ropes tied to a pole.

In Dhaka’s middle class households, things were and still are fairly sober. Even in the days of the early 1980s, Nababarsha used to be observed by serving special Bengali dishes during lunch while children had the opportunity to get a taste of the rural at fairs in the open fields, of which the capital had plenty. Most melas would last for three days and they attracted children for they had on offer a range of rural crafts, musical instruments, including dhols, flutes and whistles and even toy guns that used roll caps.

In Dhaka’s Old Town, as in many other traditional business districts across the country, the halkhata, or ledger book ritual has been the most talked about event through which the business community ushered in the new financial year. Sweets, an essential part of the ritual, were distributed for free.

The festival is celebrated mainly in Bangladesh and in West Bengal, India. However, Assam, Tripura, Odisha and in cities across the world where Bengali communities have carried their creeds also witness this urban zeal for recalling the rural.

The economic implication of Nababarsha is no longer applicable. Mughal emperor Akbar, for the purpose of tax collection, adopted the Fasholi Shan, or harvest calendar, which is attributed to the 7th-century king Shashanka. And the celebration, some experts believe, was thought up to assuage the burden of tax the countrymen had to pay on crops which they would still be waiting to reap.