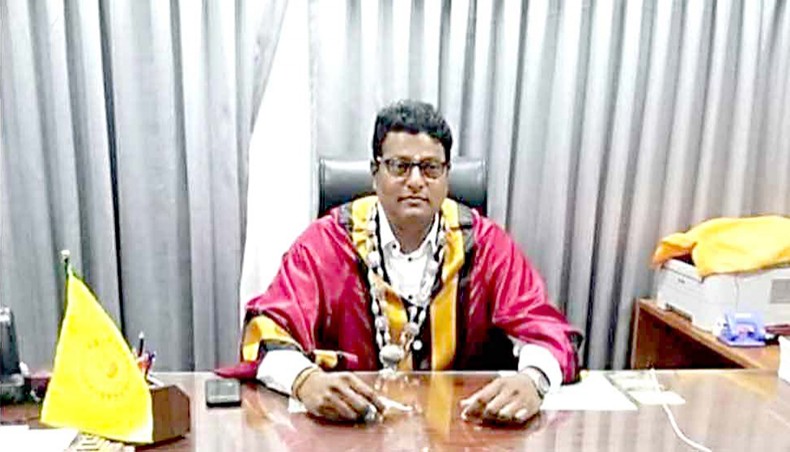 The Sri Lanka police’s terrorism investigation division on arrested the mayor of Jaffna on April 9 for allegedly promoting the LTTE’s ideology. — Ceylon Today

ONE of the definitions of reconciliation is to move from a divided past to a shared future. The arrest of the Jaffna mayor Viswalingam Manivannan came as a reminder that unhealed issues from the past continue to threaten peace in the present and the future. According to people I spoke to in Jaffna, this arrest has revived memories that were no longer in the people’s consciousness. Nearly 11 years after the end of the war, the people were no longer thinking of the LTTE police and the uniform they once wore. The bailing out of the mayor de-escalated the crisis that was brewing in Jaffna following his arrest. There were reports that a hartal, or shutdown of the city, had been planned to protest against the arrest.

Jaffna mayor Manivannan was taken into custody by the Jaffna police for allegedly promoting uniforms and iconography of the Liberation Tigers of Tamil Eelam according to the police. They had found that the mayor had recruited five individuals to perform traffic duties in Jaffna town in uniforms that resembled those worn by the LTTE’s police during the time when they ran a parallel administration in parts of the north and east. Photos published in the media show a similarity. Promoting symbols associated with the LTTE including uniforms is an offence under provisions of the Prevention of Terrorism Act.

However, the position of the municipality was that the five individuals had been recruited to a Jaffna municipal council task force on a temporary basis to enforce penalties against environmental violations such as littering the streets. According to mayor Manivannan the uniforms were in fact the same as those worn by a similar task force run by the Colombo Municipal Council. Media reported a striking resemblance between the task force uniform and the uniforms worn by the LTTE police but also that a parking meter initiative run by the Colombo Municipal Council has employed staffers who also wear a light blue shirt and pants of a darker shade, vaguely similar to the offending Jaffna outfit.

IRONICALLY, a few days prior to this incident I visited Jaffna to take part in the last rites for Fr Nicholapillai Maria Saveri who had headed the Centre for Performing Arts in Jaffna for over four decades. Under Fr Saveri’s leadership the centre produced an entire generation of artistes who reached out across all barriers of ethnicity and religion and touched the lives of people everywhere. Through his artistic and cultural productions, Fr Saveri tried to show the interdependence of those who live in the country and need to share it bringing to the fore their different talents, connections and capacities. He sought to turn the diversity and pluralism in the country away from being a source of conflict into one of strength and mutual enrichment.

The normalcy I saw in Jaffna during the short period I was there made me feel that the ethnic conflict was a thing of the past. At the hotel I stayed I saw young people come and enjoy a drink at the bar and talking with each other with animation and laughter as young people do. When I went to the District Secretariat, I was struck by the fact that they played the national anthem at sharp 8:30am and all work stopped while the anthem played all three verses in the Tamil language and all stood to attention even inside their rooms. The Lessons Learnt and Reconciliation Commission appointed by president Mahinda Rajapaksa in 2011 had recommended that the national anthem be sung in both languages and I was happy to see that in Jaffna this was being implemented a decade later.

At the funeral service for Fr Saveri I met many people and none of them spoke of war and conflict but like people in other parts of the country they spoke of the economy and cost of living. An administrator from the University of Jaffna spoke about his satisfaction at the large number of Sinhala students at the university and the mixing that was taking place as a result between the communities. He said that as the university did not have adequate hostel facilities many of the students from outside of Jaffna, including the Sinhala students, lived with local families. He said that during the recent graduation ceremony, hundreds of their family members came from the southern parts of the country and joined their children in their places of accommodation which contributed to the inter community mixing.

THE situation in Jaffna was so normal to my eyes as a visitor that one of the questions I had and to which I sought answers from those I met, was whether there was a common theme that bound the people together. Despite my inquiries I could not discern such a common theme that was openly visible or explained to me as such. It was much like the rest of the country. At the last general election the people of the north voted for a multiplicity of parties including ones that are part of the present government. The candidate who got the largest number of votes was one who was affiliated with the government. At the same time nationalist parties got votes too that saw them enter parliament and the more moderate parties emerged the largest.

The arrest of mayor Visvalingam Manivannan has now supplied a common unifying theme to the politics of the north. There is distress that the popularly elected mayor has been treated in such a manner. If the uniforms that the municipal workers were wearing too closely resembled those of the LTTE, he could have been informed that this was not appropriate. It would have been possible to ensure that the uniforms were immediately removed and replaced with ones that were more appropriate while taking into consideration the sensitivities that three decades of war would bring. As the mayor is most closely associated with government minister Douglas Devananda, such a request would most certainly have been complied with. As leader of the EPDP, minister Devananda was at the forefront of militarily fighting against the LTTE.

The government’s determination to thwart any possible attempt to revive the LTTE can be understood. The war with the LTTE cost the country enormously in terms of human suffering and economic devastation. The government won the last election on the promise that it would give priority to national security and also develop the country on that basis. However, sections of the Tamil diaspora continue to be openly pro-LTTE and espouse a separatist agenda. The loss of the vote at the UN Human Rights Council, in which the Tamil diaspora played a role, would make the government more determined to suppress any attempt to revive the LTTE. Now that the immediate crisis has been defused due to the release of the mayor on bail, it would be timely for the government to mitigate the political damage by a multiplicity of means, including by reaching out to the Jaffna Municipal Council about its municipal law enforcement mechanism.