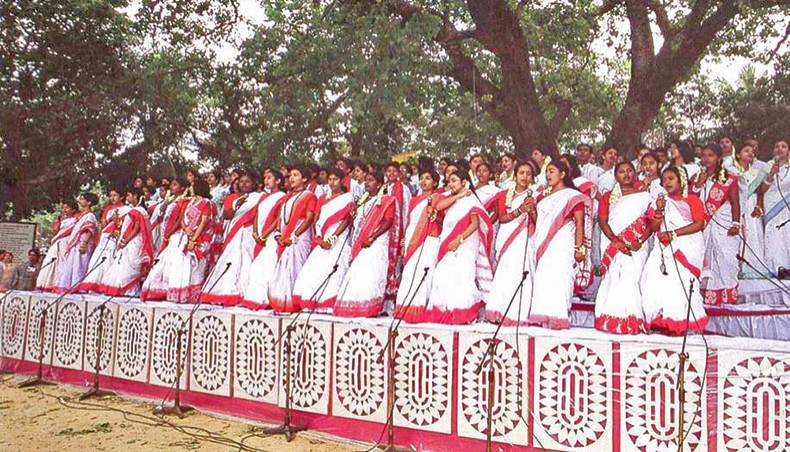 THE beginning of large-scale celebrations of Pahela Baishakh, the first day of the Bengali New Year, may be date back to the observance of the day by Chhayanaut in the 1960s. Chhayanaut appeared as a cultural organisation in 1961 and as a music school in 1963. Chhayanaut has now become synonymous with Pahela Baishakh celebrations because of its annual morning concert at Ramna Batamul.

On the first day of Baishakh, people from all over Dhaka gather at the Ramna Park, the central park of Dhaka. The original name of this area was Bagh-e-Badshahi, or the imperial garden. In 1825, Charles Dowes, a British collector of Dhaka, renovated this area and renamed Ramna Green; it later became Ramna Park. The main attraction of the early morning activities is the musical concert organised by the Chhayanaut music school.

Chhayanaut’s early morning musical event is the focal point of the nation’s Bengali New Year celebrations. The day before the celebrations, a temporary stage is built under the old banyan tree. It is generally believed that Chhayanaut selected this area as the performance space in the mid-1960s for two reasons: it is centrally located and the greenery of the park resembles the landscape of country life. Since the celebrations take place in the middle of April, which is summertime, the temperature rises as the day progresses.

People who come here to attend the early morning concert use the trees for shade. There was also an agenda of showing social power against the suppression of Bengali culture. Guy Debord, a French theorist and philosopher, asserts that ‘The city is the locus of history because it embodies a concentration of social power… and a consciousness of the past’. Chhayanaut probably wanted to celebrate the Bengali New Year, which gave birth to a new cultural movement, right in the middle of the city to mark the beginning of a new history.

In the 1960s, the wave of Bengali nationalism set off by the language movement found its voice in the serene and uplifting songs of Chhayanaut. In the mid-1960s, the Pakistani authorities were trying to order a ban on Rabindra Sangeet and that made it difficult for Chhayanaut to hold the concert focusing on Rabindra Sangeet. Nevertheless, Chhayanaut went ahead with their plan for their first open-air concert in April 1967. In that year, Pahela Baishakh was celebrated enthusiastically with a concert in Ramna Park organised by Chhayanaut. Subsequently, the Pahela Baishakh celebrations at Ramna Batamul has become an annual programme of Chhayanaut. Photographer Nowazesh Ahmed remembered, in an interview with the daily New Age back in 2004, that in the beginning ‘there was just the tree and the space in front, nothing else. Chhayanaut’s organisers and students from Charukala, now the fine arts faculty, brought up bricks, bamboo and clay. Within a day, they made the area functional. The night before the gala, the invitation cards were made and sent.’ The outline of the New Year programme was set in February when rehearsals began. Students, teachers, former students, and notable singers participated in the concert comprising solos and choral songs. The organisers of Chhayanaut took a risk in staging the event on a public location. Since then, Chhayanaut, with its celebrations of the Bengali New Year, has become an integral part of the cultural tradition of the nation. Chhayanaut is now often referred to as the cultural standard bearer of Bangladesh. It is a household name whose fame has spread far beyond cultural circles. It was the Chhayanaut school that groomed the urban middle class of Dhaka to celebrate the New Year.

After the independence of Bangladesh, the New Year celebration became a national festival, a symbol of the Bangladesh nationalist movement and an integral part of the people’s cultural heritage. Therefore, it became an important event on the agenda for the Bengali politicians and cultural activists. And the agenda now continues as a form of protest and celebration simultaneously.