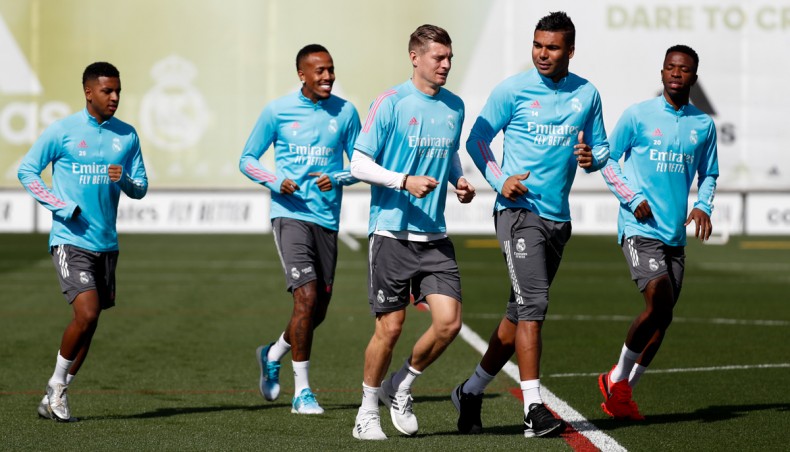 Real Madrid midfielder Tony Kroos is seen with his team-mates during a training session at the club's Valdebebas training facilities in Madrid on Sunday.-- Twitter photo

When Toni Kroos arrived for his first training session with Real Madrid in 2014, he went the wrong way.

Walking out onto the pitch at the club's sprawling Valdebebas training ground, Kroos saw two circles of players kicking the ball between them and jogged over to the one on the left.

In his mind, that circle had fewer players in it. It was logical to bolster the numbers. But generally, the left circle is for the club's Spanish players, the right for foreigners.

Nobody minded, some thinking Kroos was looking to assert himself or perhaps just was not aware of the code. The truth was Kroos knew the code but in that moment it made no sense to him.

For a club like Madrid, arguably the biggest in the world, where the fans are among the most demanding and the attention and pressure on players is almost certainly the most heated, Kroos has continued to stand out as a figure of cold, clear thinking.

The esteem in which he is now held at the Santiago Bernabeu, or more recently the Alfredo di Stefano, was certainly not automatic.

The same suspicions that hung over him at Bayern Munich endured, that here was a midfielder with no major flaws but no obvious strengths, neither destroyer nor creator, hard to define and, at first, difficult to admire.

In Germany, there had been a deeper mistrust of character too, that Kroos' lack of outward emotion stemmed from a lack of fortitude, an accusation regularly levelled at the generation that later went on to win the 2014 World Cup.

It remains the case that while Kroos' standing in the world's most successful midfield trio is unquestioned, he rarely enjoys the kind of praise aimed at the likes of Karim Benzema, Sergio Ramos, Casemiro or Luka Modric.

Modric and Casemiro have perhaps even contributed to Kroos' devaluation, Modric the featherweight playmaker and Casemiro the Brazilian wrecking-ball, each of them easier to quantify than the surgical German next to them.

Inside the club, attitudes are more emphatic. ‘Toni is incredible, a legend of the club. Whenever he goes out on the pitch he goes out with class. Nobody can play like him,’ said Vinicius Junior last week.

‘If Toni wants the team to slow down it slows down, if he wants to speed it up it speeds up,’ said Casemiro. ‘Toni decides.’

For coach Zinedine Zidane, he is an instant pick for the team's biggest games. ‘He has this authority,’ Zidane said last year. ‘He doesn't talk a lot, he's a quiet and reserved guy. He expresses himself on the pitch.’

Madrid president Florentino Perez handed Kroos a four-year deal in 2019, a show of faith given he had just turned 29 and was at the end of what had been a disappointing year for the side.

And while Manchester United almost signed him in 2014, Kroos now hopes to retire where he is. ‘The idea is to end my career at Real Madrid,’ he said.

Yet externally there is still a sense that Germany's most successful ever player flies under the radar.

It took two lazer passes last week, that caused havoc in Liverpool's defence, and a free-kick on Saturday, the winner against Barcelona, for Kroos' talents to be thrust back into the limelight.

Those assists in the 3-1 win over the English club have put Madrid in sight of the Champions League semi-finals, a job they hope to finish on Wednesday in the second leg, against an unsure opponent inside an empty Anfield.

Kroos' free-kick has made Madrid favourites to win La Liga too, even if the stumbling Atletico Madrid still have one point left of what in February was a 10-point lead.

It raises the prospect of a Spanish-European double, which seemed unthinkable a few weeks ago, but suddenly feels possible given Madrid's tendency to accelerate down the final straight.

As the season reaches its climax, this is a team that has found a confidence in adversity and a calmness under pressure. They begin to think like Kroos.