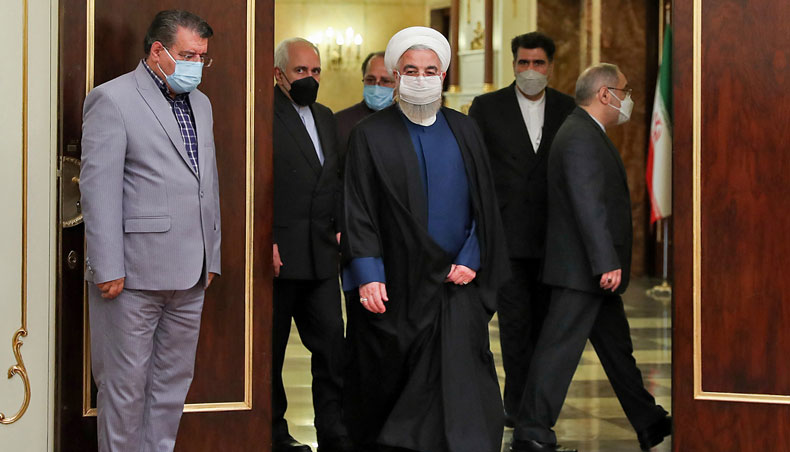 Iran’s foreign minister warned on Tuesday that ‘acts of sabotage’ and sanctions will give the United States no extra leverage in talks on reviving a troubled 2015 nuclear deal.

Mohammad Javad Zarif also blasted Israel, which Iran has accused of being behind a Sunday sabotage attack on its Natanz nuclear plant, of having made a ‘very bad gamble’.

‘We have no problem with returning to implementing our JCPOA commitments,’ Zarif said, referring to the deal with major powers, which Washington quit in 2018.

‘But the Americans should know that neither sanctions nor acts of sabotage will give them negotiation tools and these acts will only make the situation more difficult for them,’ Zarif told a joint press conference with his visiting Russian counterpart Sergei Lavrov.

Iran on Monday charged that its arch-enemy Israel was behind an attack on its Natanz uranium enrichment plant and vowed it would take ‘revenge’ and ramp up its nuclear activities.

Israel did not claim responsibility for the sabotage, but unsourced media reports in the country attributed it to the Israeli security services carrying out a ‘cyber operation’.

The New York Times, quoting unnamed US and Israeli intelligence officials, also said there had been ‘an Israeli role’ in the attack in which an explosion had ‘completely destroyed’ the power system that fed the plant’s ‘underground centrifuges’.

The White House said on Monday that the US ‘was not involved in any manner’.

Zarif said: ‘If Israel thought that they can stop Iran from following up on lifting sanctions from the Iranian people, then they made a very bad gamble.’

He said ‘what they did in Natanz, they thought it would reduce Iran’s leverage’ in the talks on bringing the US back into the deal.

‘But it makes it possible for Iran to legally, legitimately, and in order to make up for this terrorist stupidity, use any capacity it has at Natanz,’ he added.

He said the enrichment plant would be made ‘more powerful’ with advanced centrifuges.

Iran’s foreign ministry spokesman said Monday that the centrifuges hit by the power blackout were first-generation ones, not more advanced models banned under the nuclear deal.

The Natanz episode, the latest in a string of incidents hitting Iran’s nuclear programme, came days after talks opened in Vienna on reversing former US president Donald Trump’s withdrawal from the deal.

US president Joe Biden wants to revive the agreement over strong Israeli opposition, arguing that it had succeeded in sharply reducing Iran’s nuclear activities in return for relief from punishing economic sanctions.