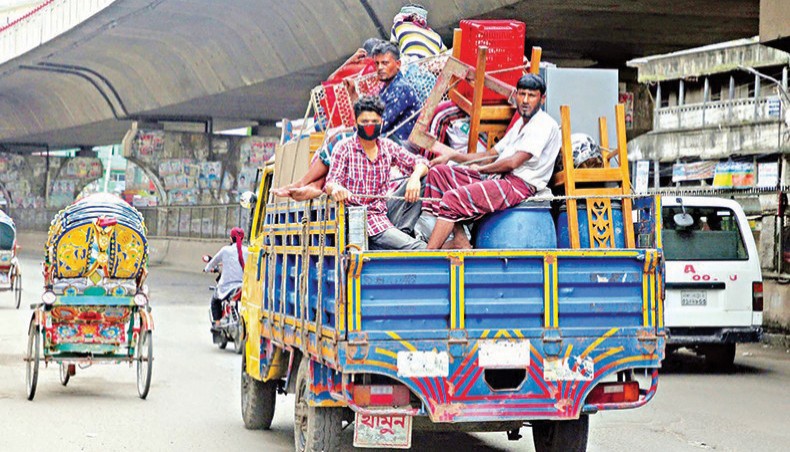 A file photo shows people leaving the capital with their belongings on a truck due to income losses amid the coronavirus outbreak in the country. — New Age photo

Bangladesh’s upper poverty rate has reached 30 per cent of the population as an adverse impact of the COVID-19 pandemic, the World Bank said in its latest report released on Monday.

Substantial gains in household incomes and poverty reduction achieved over the past two decades have been put at risk by the pandemic, said the report titled ‘Bangladesh Development Update: Moving Forward Connectivity and Logistics to Strengthen Competitiveness’.

The pandemic has severely impacted jobs and earnings and caused poverty to rise in the fiscal year 2020 and an exercise of the WB estimated that the country’s upper poverty rate, based on the national poverty line, had reached 30 per cent of the population.

According to the Bangladesh Bureau of Statistics, the estimated national poverty rate was 20.5 per cent in 2019.

According to the WB, those who live on less than $1.9 a day are defined as poor.

Referring to a nationwide phone-based survey conducted in September-November 2020, the Washington-based multilateral lender said that almost one in five economically active individuals experienced either a job loss or a prolonged absence from work since the onset of the COVID-19 crisis.

Among employed individuals, 51 per cent reported loss in earnings or wages.

The subsequent surveys, however, pointed to a gradual labour market recovery in major urban centres by February 2021, the WB said.

The percentage of adults working in the week preceding the interview increased to 66 per cent from 50 per cent between June 2020 and February 2021, it said, adding that the rate reached 69 per cent in Dhaka and 62 per cent in Chattogram.

The WB at a virtual press briefing organised to release the report said that Bangladesh’s economy showed nascent signs of recovery amid uncertainties and was expected to grow by 3.6 per cent in the current FY2021.

There are, however, some risks stemming from COVID-19, elevated financial sector risks, weak capital buffers and weak government revenues, it said.

Gross domestic product (GDP) growth is expected to grow led by a recovery in manufacturing on the back of strong export demand and remittance inflows, a rebound in construction supported by accelerating public investment and robust services growth thanks to progress in the vaccination campaign, it said in the report.

The outlook that could range from 2.6 to 5.6 per cent, however, will depend on the pace of the ongoing vaccination campaign, the extent and duration of mobility restrictions and how quickly the world economy recovers, the report said.

The pandemic has exacerbated the situations, it said, adding that reduced profitability, weaker asset quality and lower credit growth can have large second-round repercussions on the real economy. The fragile outlook for the global recovery adds external risks, if it impacts demand for readymade garment products and employment of Bangladesh’s overseas workforce, it said.

The ongoing vaccination campaign is expected to accelerate in May, when Bangladesh will receive 6.8 crore doses under the COVAX initiative, the report said.

According to the report, the logistics sector can play an important role to support recovery in the country and drive improvements in its competitiveness as the COVID-19 pandemic reshapes trade and supply chains.