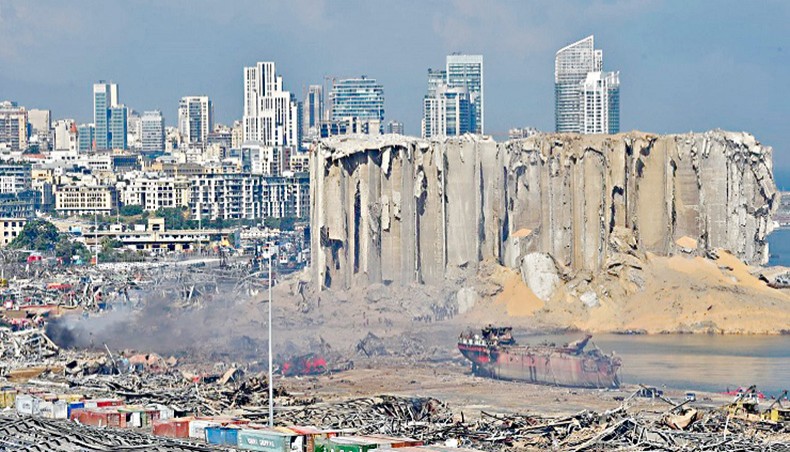 ONE thing is obvious as we enter the spring (northern hemisphere) of 2021. Israel with the help of Saudi Arabia and aided by a United States deemed too politically crippled to formulate a balanced foreign policy, plan to destroy Lebanon and Jordan, turning them into bases of power to stand against what they see as rising Iranian influence.

The Biden administration did not choose this policy, but they will not be able to prevent it and every moment the US waits until finally dropping sanctions against Iran will bury the US even deeper.

Both Syria and Iraq are already crippled by an Israeli run Kurdish nation that has seized huge swaths of Arab territory. Aided by the US, Israel’s Kurdish allies control Syria’s water supply, their wheat crops and their oil.

It does not take a genius to turn the clock back to the heyday of ISIS. Had the ISIS caliphate succeeded in taking over both Syria and Iraq, and that nearly happened, would Israel have been more or less secure?

Did any action of Israel during this period demonstrate that Tel Aviv saw ISIS and al-Qaeda as a potential threat of any kind? In January 2014, I presented an analysis of ISIS and al-Qaeda to the Iraqi government in Bagdad warning them of what key experts saw as inexorable. Our Sunni Iraqi hosts, including a number of state governors and key officials of the Bagdad regime, believed that ISIS could easily be controlled as its cadres were exclusively, at that time, from key Iraqi families, all Sunni, who had supported Saddam Hussein.

ISIS was going to guarantee a Sunni only government in Bagdad and then, on command, bend to the will of their ‘betters.’ This was the thinking Saudi Arabia was fomenting among its good friends in both Iraq and Syria.

ISIS was going to be a magic bullet to end Iranian influence in Iraq. What they did not know is that it was part of a long-planned destabilisation that was engineered to end all Islamic power bases in the region, not just Iraq but even Pakistan as well, a story we will get to at another time.

Behind this, there were secret protocols and assurances from Washington and Tel Aviv that assured key allies within the region that ISIS would never be a real threat as it and al-Qaeda would be beholding to western powers for arms and to Saudi Arabia for cash.

What should have been obvious to even a blind man is that any and every action the west formulates in the Middle East is commercial in nature, war for profit, war for resources and war as a way of life.

Then there is the refugee issue, carefully orchestrated to bring about a political surge to the right across Europe.

THE most recent decade of ‘regime change’ wars have left one glaring survivor, Syria and has made something else clear, that Israel, Saudi Arabia and the UAE have acted in concert for many years, perhaps decades.

The Trump presidency made one thing clear as well, for those who are willing to broaden their horizons. The actions of the US have brought nothing to the US but bankruptcy and pain and that the government of that greatest of all nations, as they oft refer to themselves as, is one of the most corrupt regimes on earth.

If we are to assume ‘yes,’ then one would see real moves to return to the JCPOA agreement with Iran and statements from Biden’s secretary of state Blinken about curtailing Israeli expansionism and the continued persecution of the Palestinian people.

The last ten days has provided such evidence.

Yet, US activities in Syria continue, perhaps as a bargaining chip with Iran or as a ‘last ditch’ foothold in a Middle East that has learned to get along without the US.

HOWEVER, as we assert here, the diminished role of the US may well be a natural progression for the self-destructive polices the US engaged upon in the wake of 9/11, some two decades ago. The US was attacked and, in response, warred on everyone but those responsible, beginning two decades of wars that did nothing but serve Israeli expansionism and the security interests of the Saudi state.

This is exactly where the evidence is taking us.

Why Lebanon and Jordan

THE answers are simple, because we can, because it serves internal Israeli politics and because it engages both Saudi Arabia and the UAE in a criminal partnership with Israel that must be continually tested and reinforced, particularly in light of the failed joint effort against Yemen.

Two nations in the Middle East are being targeted for destruction, Lebanon and Jordan. Both represent threats to Israel, and both are vulnerable because of a total control ‘the narrative.’ To understand to what degree reality can be distorted and insane falsehoods allowed to enter the historical record, one needs only to examine the events that led to the destruction of Beirut.

On August 4, 2020, a massive explosion destroyed the Port of Beirut. We were told it was fertiliser, set off by fireworks. The crater, largely underwater, penetrated 50 feet of solid rock and is over 500 feet across.

When video of an Israeli attack, one announced only days earlier, showed missiles coming in and reports and video of Israeli F-16s, their platform for delivering nuclear weapons, surfaced, a secondary attack, one on reality itself, moved into high gear.

Key Lebanese defence officials reported, though Damascus, that Israel had just hit Beirut with a nuclear weapon. Within two hours, a dozen videos had been sent via email and secure platforms, to Veterans Today along with eyewitness reports. At the request of Iranian filmmaker and TV host, Nader Talebzadeh, a video report was made immediately, translated into Arabic and Farsi, and broadcast along with live coverage. That video (original English only version) was seen tens of millions of times.

Secondarily, US president Donald Trump announced that Beirut had been hit with ‘a bomb.’ When asked to walk back his statement, president Trump further stated this assertion, from the Times of Israel:

‘US president Donald Trump said Tuesday that US generals had told him that the powerful explosions that rocked Beirut appeared to have been caused by a “bomb of some kind.”

‘“It looks like a terrible attack,” Trump told reporters at the White House. “It would seem like it, based on the explosion. I met with some of our great generals and they just seemed to feel that it was,” he said. “This was not some kind of a manufacturing explosion type of event. It seems to be, according to them — they would know better than I would — but they seem to think it was an attack.”

When the initial cover story of fertiliser and fireworks quickly fell apart due to simple science, fertiliser does not burn, another story, one of a nearby fuel oil storage area, filled in this one missing detail.

You see, to explode ammonium nitrate lawn fertiliser, one must mix a slurry with a hydrocarbon fuel like fuel oil and, of course, set it off with blocks of TNT. ANFO, as it is called, is a compound, like the batter from a cake mix.

Try leaving the milk and eggs in the refrigerator, the cake mix in the box, then turn on the oven and see if you get a cake. This is the logic the public is being told to accept, logic that defies science, defies common sense and defies simple engineering. Blowing a massive crater in solid rock requires one of two things, high explosives in huge quantities drilled into holes many meters deep or a surface blast from a nuclear weapon.

The original ‘bunker buster’ bombs, which are now nuclear, are built inside the barrel of a heavy cannon, and designed to be dropped from high altitude and very high speed, in order to penetrate deep into rock. Otherwise, any surface explosion would be just that, it would explode upward only. This is what explosives do.

By the next day, Saudi Arabia and Israel, working in concert with Jared Cohen of Google’s Jigsaw and Idea Groups regime change platform, began cleansing the internet, releasing faked videos and attacking anyone who accurately reported what happened.

Worse still, so much worse, when Lebanese citizens who knew very well they had been attacked began street protests, they were not only violently suppressed but their protests were purposely misreported as ‘food riots.’

The predictions made in that initial video that Lebanon was targeted and that the attack was carefully planned to destabilise the nation, destroy its food supplies and crash its currency have all come to pass.

Then there is the cue bono thing, who benefits?

This SouthFront report from July 2019 is the last remaining vestige of the real situation, Israel’s assertion that Hezbollah was using the Port of Beirut for missile shipments and storage and Israel’s plans to hit the port with a weapon of mass destruction. The Israeli military has accused Hezbollah of smuggling weapons and missile manufacturing materials through Beirut Port.

Lieutenant colonel Avichay Adraee, a spokesman for the Israeli military, accused Hezbollah of threatening Lebanon’s security by smuggling such dangerous materials into the country in cooperation with Iran’s Islamic Revolutionary Guard Corps.

‘Unfortunately, the border crossings with Syria, Beirut International Airport and the port of Beirut are used to transfer materials from the Iranian Quds Force [an IRGC unit] to Hezbollah,’ Adraee wrote on Twitter on July 24.

The spokesman also shared an infographic showing three routes, which Hezbollah is allegedly using to smuggle weapons and missile manufacturing materials from Iran to Lebanon.

These new accusations went in the framework of Israel’s policy towards Lebanon. Earlier this year, Paris allegedly warned Beirut that the Israeli military could strike Hezbollah missile sites. The warning was met with a strict response from the Lebanese party that vowed to react to any attack.

In a flurry of press releases a month after the Beirut explosion, Israel removed all mention of targeting the Port of Beirut at all, having their media assets cleanse all reference to their threats to destroy the port, threats that became a reality on August 4, 2020.

Now former US president Donald Trump has been silent on his assertions that the port was attacked with a ‘bomb’ that could only have been nuclear. No one has asked him; he has volunteered nothing and the general he referenced as his source is silent as well.

The general lack of curiosity reads as volumes, as it always does.

PRESIDENT Biden should, eventually, be able to push the US, perhaps reluctantly, back into line with its treaty obligations with Iran. That said, Biden is then faced with a military presence in Iraq that will not end as long as the US is backing a Kurdish nation state, something that can only be done from Iraq.

Similarly, the US is trapped by its own stupidity in Afghanistan as well, unable to walk away from the ‘dancing boy’ regime in Kabul.

If the US withdraws from Afghanistan, Iraq or Syria, it leaves itself vulnerable to both Russia and China, assuming that the region is certain to fall to globalist interests. This is always the assertion, ‘if we don’t take it, someone else will.’

New Eastern Outlook, April 9. Gordon Duff is a marine combat veteran of the Vietnam War. He is a senior editor and chairman of the board of Veterans Today.