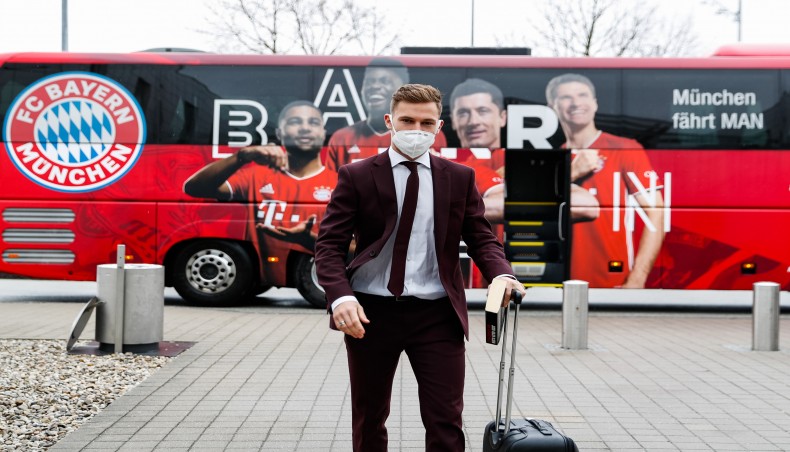 Bayern Munich midfielder Joshua Kimmich is seen prior to the team's departure for Paris on Monday. -- Twitter photo

Bayern Munich midfielder Joshua Kimmich is convinced the holders can beat Paris Saint-Germain at the Parc des Princes on Tuesday in their Champions League quarter-final second leg to reach the last four.

‘I believe that we will progress, because we're the better team,’ Kimmich told the club's website.

Bayern need to overturn a 3-2 defeat from last week's first leg in Munich.

‘We were the better team in the first leg, but unfortunately the result didn't correspond to the performance,’ added Kimmich.

‘Nevertheless, I'm confident that we can still turn it around in the second leg.’

Despite peppering the PSG goal with 31 shots, 12 on target, Bayern lost the first leg at home after Kylian Mbappe scored twice and Marquinhos also hit the net as PSG had just four shots on target.

‘Apart from that, I don't remember Paris having that many chances.

‘Overall, our attack had more possession and more chances. Now we have to take these chances.’

Bayern are without injured top-scorer Robert Lewandowski and winger Serge Gnabry after he tested positive for Covid-19.

However, Bayern coach Hansi Flick says Leon Goretzka, Lucas Hernandez, Jerome Boateng and Kingsley Coman have shaken off knocks and should be fit.

‘We have to do our job, force them to make mistakes,’ Flick told a press conference on Monday. ‘It's a tough task, but we want to create a little surprise.’

Kimmich added: ‘A lot will come down to mentality, but also efficiency.

‘We already showed a good mentality in the first game but we weren't efficient enough. This time we need both.

‘It's down to every individual in our team, not just me. Every player must become a leader in this game.

‘Everyone must show their character on the day and have total belief in themselves.

‘And then we have to strike when the chance comes.’

Bayern need to win by two clear goals or score three times and win by one to have a chance of going through, but forward Thomas Muller said the German champions would not be reckless.

‘We want to push for our first goal very quickly, but not use the crowbar from the start.’

Muller highlighted the importance of not allowing Mbappe to attack the space behind Bayern's defence.

‘Mbappe in particular is very dangerous. The way we play creates space, so it is important that he cannot be left to run on his own in space,’ added Muller.