Tigers look to revive past attitude 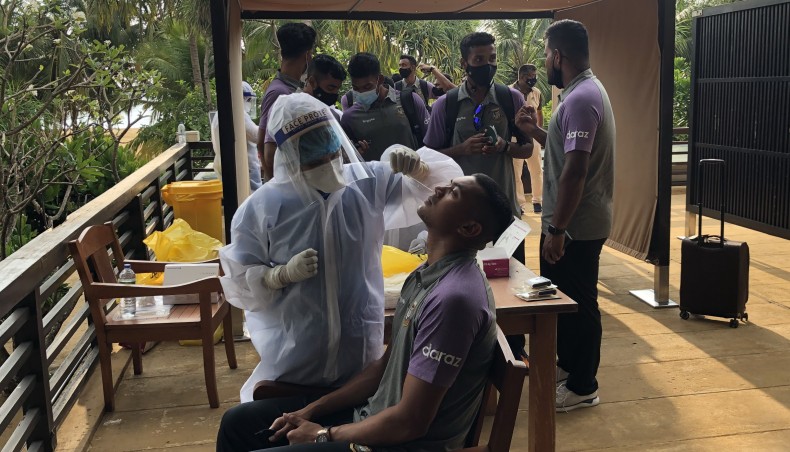 Bangladesh Cricket Board director and the team leader of the Bangladesh contingent for the Sri Lanka series Khaled Mahmud said that he wants to see the Tigers take on the field with a positive attitude that has been missing from the side in recent series’.

A flight carrying the 21-member Bangladesh squad, support staff and officials left for Colombo at around 12:30pm from the Hazrat Shahjalal International Airport in the capital on Monday.

After landing in Sri Lanka, all members of the contingent gave samples for COVID-19 testing and checked in at a quarantine facility at Negombo, where they will have to stay for two more days.

If the players test free of coronavirus twice, they will be allowed to train from April 15.

Bangladesh will play two Tests in the series which are part of the ICC World Test Championships, where they are yet to register any points after playing five matches.

The Tigers traditionally have always been a weak side in Tests but since 2019 they have descended to new lows in the format.

They have lost eight of their last nine Tests, which included two defeats against a weakened West Indies team in February and one against Afghanistan, who were playing their third Test ever, in 2019.

This slump in form came after the Tigers pulled off some momentous wins in the format, home Tests wins over England, Australia and beating Sri Lanka in Sri Lanka in Bangladesh’s 100th Test.

But those wins now seem like a distant memory as currently the side looks very low on confidence on the field and lacks the team spirit that aided them in punching above their weight on many occasions in the past.

Mahmud, who joined the team after a gap of a few series, wants the old positive attitude back in the side from this series, which will begin on April 21 with the first Test in Pallekele.

‘I always emphasise on playing positive cricket, attitude is very important. The positive attitude we used to see two years ago, I want to see that again. I want the team to fight on the field and think about the result later. But at first, we want to give a fight,’ Mahmud said before leaving for Colombo.

Bangladesh are without two experienced players in Shakib Al Hasan and Mustafizur Rahman, as they are busy with their Indian Premier League sides.

In their absence, the younger players will have to step up and shoulder more responsibility, something most of them failed to do in the recently concluded New Zealand tour.

But Mahmud feels that the current lot of players have the ability to perform at the highest level and all players will have to pull their weight in the series if the team is to put forth a good performance against Sri Lanka.

‘Even though Tamim [Iqbal], Mushfiq [Rahim], Mominul [Haque] are more experienced, everyone has to carry the same amount of responsibility when they take the field wearing the national team’s jersey. Everyone has a responsibility to play well.

‘All of our players are capable enough. We have to keep that in mind and play positive, attacking cricket.’