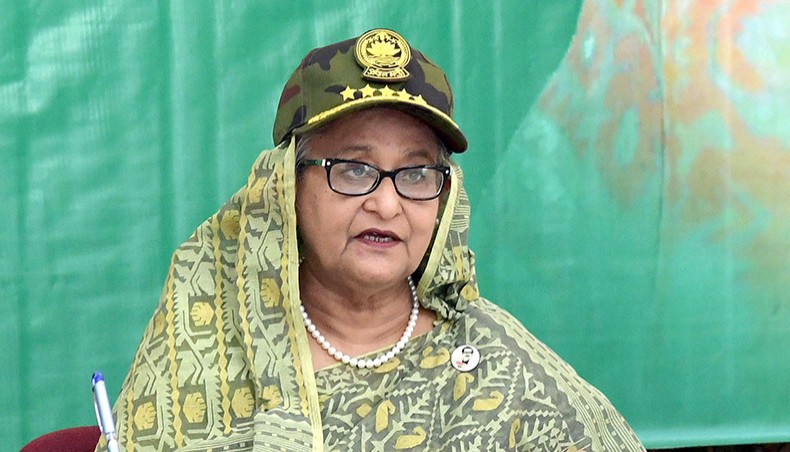 Prime minister Sheikh Hasina on Monday stressed the need for equipping peacekeepers with appropriate training and equipment with facing new crises in the peacekeeping operations at the advent of newer technologies alongside invisible enemies like the coronavirus.

Joining virtually the concluding ceremony, ‘Exercise Front Runner of Peace-2021 (Exercise Shantir Ogroshena, 2021)’ organised by the Bangladesh Army held at the Bangabandhu Cantonment, Ghatail, Tangail from her official Ganabhaban residence, she also said, in the current context, ensuring world peace has become much more challenging than in the past.

‘With the advent of invisible enemies like the coronavirus, the rapid spread of technology, and the advancement of time, new threat elements have emerged,’ she added.

She said that she learned that some of the recent incidents in the UN peacekeeping mission had been presented to the participants in exercise so that our future peacekeepers may be well-trained in making appropriate decisions to deal with such situations.

The prime minister cordially greeted the participating military members from the friendly countries- India, Bhutan, and Sri Lanka along with the members of the Bangladesh Army in this exercise and invited observers from the United States, the United Kingdom, Turkey, Saudi Arabia, Kuwait, and Singapore.

She said, ‘Surely our bilateral relations will be further flourished through you in the days to come.’

The prime minister said that this multinational exercise would be a milestone in establishing the country’s founding president Sheikh Mujibur Rahman’s philosophy of peace.

She said that she was very happy to be virtually present at the closing ceremony of ‘Exercise Front Runner of Peace’ held in Bangladesh from 4th to 12th April 2021 on the occasion of the birth centenary of Sheikh Mujibur Rahman, and the golden jubilee of Bangladesh’s independence.

The prime minister, however, expressed her dissatisfaction for not being able to present in the function due to the COVID-19 outbreak.

Noting that properly trained armed forces are essential to safeguarding the national integrity and sovereignty of any country, the prime minister said, ‘Similarly, there is no alternative to regular exercise in proving the capabilities of the military members.’

The prime minister said that so far, more than 175,000 Bangladeshi peacekeepers, including 1,800 women peacekeepers, have participated in 54 missions in 40 countries of five continents.

Stating that, at present, more than 7,000 Bangladeshi armies and police personnel are deployed in 10 peacekeeping missions, she said, ‘In every mission that our peacekeepers have destined, they have raised the flag of the United Nations high, as well as brightened the image of Bangladesh. They also did many social works on the humanitarian ground. That is why Bangladesh today has become one of the highest peacekeepers sending country in the world.’

A brief video presentation was made on the ‘Exercise Shantir Ogroshena, 2021’ on the occasion.

The chief of army staff on behalf of the prime minister distributed certificates among two each participant out of 123 of the four participating nations, Bangladesh, India, Bhutan, and Sri Lanka.

Referring to a speech of Sheikh Mujib at the Military Academy in Cumilla on 11th January 1975, the prime minister said, ‘If given full opportunity, our boys will be able to deal with any soldier of any country. I believe we will establish such an academy where people from around the world will come to see.’

She mentioned that Sheikh Mujib had only three and a half years to rebuild and develop the country, saying, ‘In just nine months, he presented a constitution. Article 25 of that constitution laid the foundation for the state-policy of newly independent Bangladesh through promoting international peace, security, and solidarity- where respect for national sovereignty and equality, non-interference in other countries internal affairs, peaceful resolution of international disputes and international law and UN Charter were declared as the principles of international relations.’

The prime minister said that in this short period, Mujib transformed a war-ravaged country into a least developed country.

But, unfortunately, on 15th August 1975, we lost him along with most of his family members, she said, adding, ‘After 21 years of struggle and self-sacrifice, we formed the government in 1996. At that time, I modernised the military as well as established the country’s apex training center ‘National Defence College.’

‘We created opportunities for the higher training of military and civilian officers on security, strategy, and development in this institution. In an effort to consolidate world peace, we set up the Bangladesh Institute of Peace Support Operation Training in 1999 for the purpose of providing state-of-the-art training to peacekeepers at home and abroad,’ she added.

In this context, she said, ‘I have established the BIPSOT to give well training to Bangladeshi peacekeepers before joining the peacekeeping missions.’

After reformation of the government in 2009, she said that they have formulated a long-term plan titled ‘Forces Goal-2030’, in accordance with Defence Policy adopted by Sheikh Mujibur Rahman in 1974 which the government has been implementing with the aim of building a highly professional and trained military.

‘In 2016, we established Bangladesh Peacebuilding Centre,’ she said.

Mentioning that in the last 12 years, they have made significant progress in modernizing the country’s three forces, she said, ‘We have added sophisticated weapons and technology to our military. We have adopted a zero-tolerance policy to eradicate terrorism and militancy. Even during the pandemic, we have achieved 5.4 per cent GDP growth due to the government efforts to run the country’s economy. We have promoted from least developed country to a developing nation.’

The prime minister said on 23rd May 1973, the World Peace Council awarded the Julio Curie Peace Prize to Sheikh Mujibur Rahman for his outstanding contribution to establishing world peace and human rights.

She said that her father’s vision of world peace was truly reflected in his speech at the United Nations in 1974, quoting him as saying, ‘Peace is essential for the survival of mankind. In this peace, the deep hopes and aspirations of all men and women around the world are assembled. Peace can never be lasting unless it is based on justice.’

The prime ministe continued that most recently, the government of India awarded Sheikh Mujib the Gandhi Peace Prize for which she thanked the Indian government.

‘These awards are the testimony of the lifelong struggle of the Father of the Nation for the peace and prosperity of the world including for the people of Bangladesh,’ she said.

The prime minister said that Bangladesh always believes in peace being imbued with the foreign policy adopted by Sheikh Mujibur Rahman, ‘Friendships to all, malice to none,’ adding, ‘We are running the state with keeping it in mind.’

The prime minister said that they were celebrating the birth centenary of Mujib in 2020-2021 to pay homage to Sheikh Mujibur Rahman by embracing his ideals in establishing world peace alongside it, the entire Bengali nation is proudly celebrating the golden jubilee of our great independence.

‘Leaders from 116 countries around the world have sent video messages and written congratulatory messages. In those messages, the contribution of Bangladesh in establishing world peace including this region has been endorsed,’ she said.

The prime minister, however, thanked all the countries for sending the messages marking the twin celebrations.