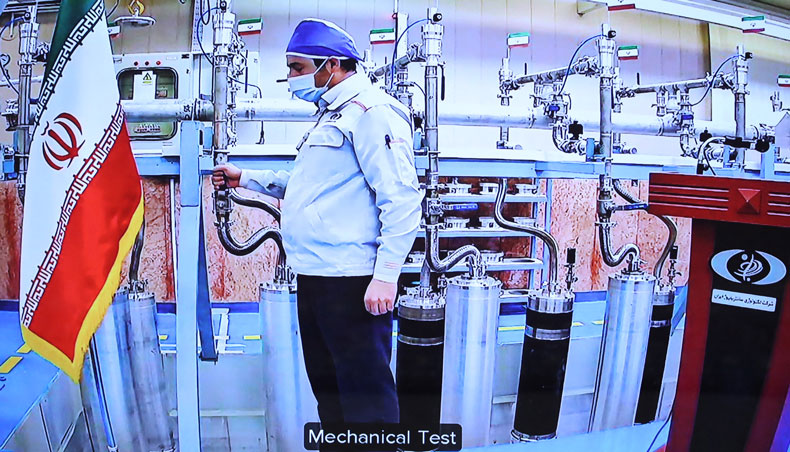 A hand-out picture provided by the Iranian presidential office on April 10, 2021, shows a grab of a videoconference screen of an engineer inside Iran’s Natanz uranium enrichment plant, shown during a ceremony headed by the country’s president on Iran’s National Nuclear Technology Day, in the capital Tehran. — AFP photo

Iran’s atomic energy organisation said on Sunday the Natanz nuclear facility was hit by a terrorist act, hours after it said an ‘accident’ had caused a power failure there.

The episode came a day after the Islamic republic said it had started up advanced uranium enrichment centrifuges at the site, in a breach of its commitments under a troubled 2015 deal with world powers.

Ali Akbar Salehi, the head of the Iran Atomic Energy Organisation, condemned a ‘futile’ act, while urging the international community to ‘confront this anti-nuclear terrorism’, in a statement carried by state television.

The attack was carried out by ‘opponents of the country’s industrial and political progress, who aim to prevent development of a thriving nuclear industry,’ he said, without specifying what country or entity might be behind the alleged sabotage.

IAEO spokesman Behrouz Kamalvandi had earlier reported an accident at the enrichment facility caused by a ‘power failure’.  No one was injured and there was no radioactive release, the official Fars news agency reported, citing the spokesman.

Kamalvandi said there had been ‘an accident in part of the electrical circuit of the enrichment facility’ at the Natanz complex near Tehran.

‘The causes of the accident are under investigation and more details will be released later,’ he added, before the later statement put out by the agency’s chief.

He did not say whether power was cut only in the enrichment facility or across other installations at the site.

‘This incident, coming (the day after) National Nuclear Technology Day, as Iran endeavours to press the West into lifting sanctions, is strongly suspected to be sabotage or infiltration,’ Chariati said.

Iran’s president Hassan Rouhani had on Saturday inaugurated a cascade of centrifuges for enriching uranium and two test cascades at Natanz, in a ceremony broadcast by state television.

An Israeli public broadcast journalist, Amichai Stein, said on Twitter ‘the assessment is that the fault’ at Natanz is the ‘result of an Israeli cyber operation’, without elaborating or providing evidence to corroborate his claim.

Israeli prime minister Benjamin Netanyahu said later Sunday that ‘the struggle against Iran and its proxies and the Iranian armament efforts is a huge mission’.

Netanyahu made the remarks during an event involving intelligence service Mossad and the army for Israel’s independence anniversary.

Iran’s president had on Saturday also inaugurated a replacement factory at Natanz, after an explosion at a facility making advanced centrifuges there last July.

Iranian authorities likewise blamed the July incident on ‘sabotage’ by ‘terrorists’, but have not released the results of their investigation into it.

The equipment inaugurated Saturday enables quicker enrichment of uranium and in higher quantities, to levels that violate Iran’s commitments under the 2015 nuclear deal it agreed with the five permanent United Nations Security Council powers, plus Germany.

The administration of then-US president Donald Trump unilaterally withdrew from this multilateral nuclear accord in 2018 and re-imposed biting sanctions on Iran.

Iran later responded by progressively rolling back its own commitments under the agreement.

Trump’s successor Joe Biden has said he is prepared to return to the deal, arguing it had — until Washington’s withdrawal — been successful in dramatically scaling back Iran’s nuclear activities.

Iran’s latest move to step up uranium enrichment follows an opening round of talks in Vienna Tuesday with representatives of the remaining parties to the nuclear deal on bringing the US back into it.

The talks are focused not only on lifting the crippling economic sanctions Trump re-imposed, but also on bringing Iran back into compliance.

Iran’s nemesis Israel has always been implacably opposed to the 2015 accord.

In November last year, Iran’s top nuclear scientist Mohsen Fakhrizadeh was killed by machine gun fire while travelling on a highway outside Tehran.

Iran’s elite Revolutionary Guards said a satellite-controlled gun with ‘artificial intelligence’ was used in the attack, which Tehran blamed on Israel.

Uranium enrichment can produce the fuel for a nuclear reactor, or in highly extended form, the fissile core of an atomic warhead. It is one of the most sensitive nuclear activities carried out by Iran.

Rouhani had again underlined at Saturday’s ceremony that Tehran’s nuclear programme is solely for ‘peaceful’ purposes.