Rules violation on across Bangladesh amid extension of restrictions 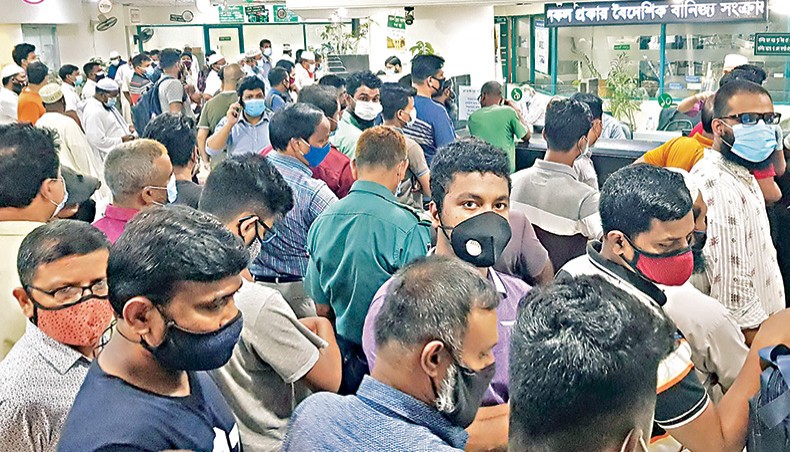 A large crowd gather inside the Malibagh branch of Islami Bank Bangladesh Limited for services in Dhaka on Sunday. — Sourav Lasker

Amid the announcement of the extension of the weeklong restrictions on public movement and businesses to contain the current surge in COVID-19 cases, Sunday witnessed an increase in violation of the instructions.

Road transport and bridges minister Obaidul Quader on Sunday said that the ongoing restrictions would continue on April 12 and April 13 and then, from April 14, ‘more strict and complete lockdown’ would be imposed.

Ahead of Baishakh celebration and Eid-ul-Fitr, shoppers crowded the popular shopping malls and markets since Sunday morning while people also crowded the banks.

There were severe traffic congestions on roads in the capital throughout the day, especially in the market areas, causing huge sufferings of the people.

Bangladesh Inland Water Transport Corporation on the day operated ferries on the Shimulia-Banglabazar route with almost full capacity due to increased pressure of people on the southern-district routes.

People were also seen leaving Dhaka on national highways on routes leading towards northern districts by pickup vans, microbuses, cars and three-wheeler vehicles as buses on long-routes were off the street.

Some passengers alleged that they were travelling to different districts at night by paying double fares.

The Cabinet Division on April 4 issued an 11-point instruction restricting public movement outside home between 6:00pm and 6:00am without an emergency, closing all markets and shopping malls, banning the operation of all modes of public transport, including domestic flights, limiting the banking hours and selling time at kitchen markets and shops of essentials between April 5 and April 11.

During the restriction, the offices remained open and the government backtracked on Thursday on the restriction of public transport and allowed buses on roads in all city corporation areas from Wednesday between 6:00am and 6:00pm with increased fare until further notice. The government also decided to allow markets and shopping malls to reopen on Friday from 9:00am to 5:00pm till April 13.

Obaidul on Sunday said that buses on roads in all city corporation areas would run with 50 per cent passengers against seating capacity with coordinated fare today and tomorrow.

Services of all inter-district buses would remain suspended until further notice, he added.

The situation was the same at the super shops where people thronged to buy essentials ahead of Ramadan.

Maintaining social distancing was not witnessed there while the use of hand sanitisers was also rare at these places.

People were seen stranded on vehicles for hours on busy roads.

A huge crowd of people were seen at government and private banks on the day after two weekly holidays which were in operation for limited hours.

Though no interdistrict buses operated from the Gabtoli bus terminal, people were seen bargaining with the drivers of cars and even CNG-run auto-rickshaws to travel long distances.

New Age correspondent in Munshiganj reported that the pressure of people from Dhaka travelling to 21 southern districts increased at the Shimulia ferry terminal on the day.

Earlier, due to the restrictions, the BIWTC operated only one or two ferries on the route for emergency river crossing and for goods-laden vehicles, but since Friday, more ferries were deployed as the number of cars and other vehicles saw a sudden increase.

On Sunday morning, the number of people coming to Dhaka was higher than the past few days at the terminal and by the afternoon, the Shimulia-Banglabazar ferry route had to cope with more pressure as people on the water route increased.

At that time, more than 300 cars, in addition to many good-laden vehicles, were seen waiting at the terminal to cross the river while the BIWTC was operating 14 ferries out of a total of 18 on the route.

Some of the passengers were seen crossing the river by trawlers.

Many of them were seen reaching the terminal by three-wheeler vehicles.

Shimulia terminal assistant manager Prafulla Chowhan said that in the morning they were operating 15 ferries while around 12:00pm a ferry went out of order.

The number of vehicles was increasing following the announcement of the lockdown, he added.

New Age correspondent in Tangail reported that people were seen heading towards the northern districts from Dhaka by boarding pickup vans in areas including Pakulla under Mirzapur upazila in the morning.

On Saturday night, the same outflux was witnessed at Pungli area under Kalihati upazila.

Moina, a domestic help at a house in Dhanmondi, said that her elder son came to Dhaka from Rangpur by bus on Friday night paying Tk 1,000 instead of the regular fare of Tk 500.

‘Maybe some of them took some passengers illegally without informing the owners,’ he added.