Kremlin not moving towards war with Ukraine 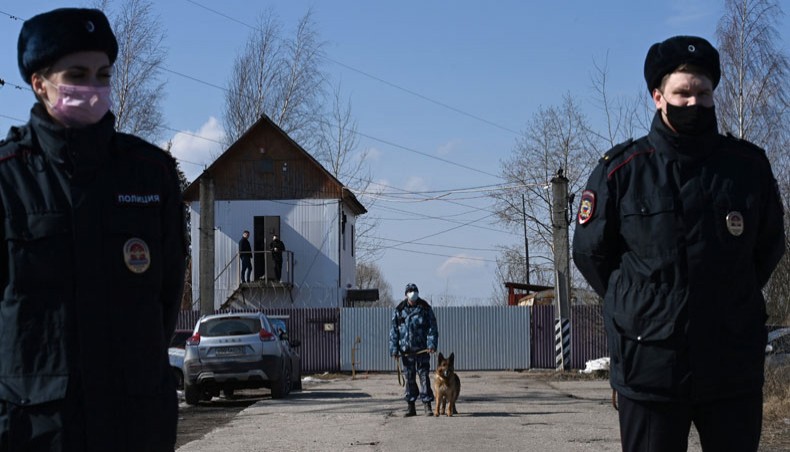 Russian police officers guard the entrance to the penal colony N2, where Kremlin critic Alexei Navalny has been transferred to serve a two-and-a-half year prison term for violating parole, in the town of Pokrov on April 6, 2021. — AFP Photo

The Kremlin on Sunday said it was not moving towards war with Ukraine as Russia increased its military presence on the border with Ukraine’s eastern breakaway territories.

In recent weeks fighting has intensified between Ukraine’s army and pro-Russian separatists controlling two regions in the country’s east, raising concerns of major escalation in the long-running conflict.

‘Of course, nobody is planning to move towards war and in general, nobody accepts the possibility of such a war,’ Kremlin spokesman Dmitry Peskov said in a televised interview on Sunday.

President Vladimir Putin’s spokesman added that ‘nobody also accepts the possibility of civil war in Ukraine’.

Peskov insisted that Moscow is not involved in the conflict, adding, however, that Russia ‘will not remain indifferent’ to the fate of Russian speakers who live in the conflict-torn region.

‘Russia is making every possible effort to help resolve this conflict. And we will continue to explain this tirelessly,’ Peskov said.

Ukraine has accused Russia of amassing thousands of military personnel on its northern and eastern borders as well as on the annexed Crimean peninsula.

The Kremlin has not denied the troop movements but insisted that Moscow does not intend to threaten anyone.

The White House this week said the number of Russian troops at the border with Ukraine was now greater than at any time since 2014, when the conflict erupted after Russia’s annexation of Crimea from Ukraine.

Fighting subsided in 2020 as a ceasefire agreement took hold last July, but clashes have picked up again since the start of the year, with each side blaming the other.

On Thursday Ukraine’s President Volodymyr Zelensky visited the eastern frontline, speaking with soldiers in the trenches.

According to the president, 26 Ukrainian soldiers have been killed since January, compared to 50 in all of 2020.

Since 2014, the conflict in Ukraine’s east has claimed more than 13,000 lives and displaced many others, while negotiations for a lasting peace deal have stalled.