No experiment in SL series: Mominul 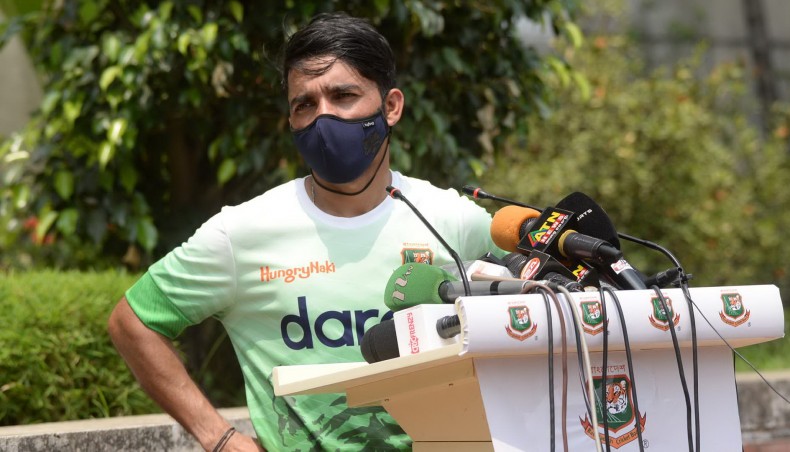 Bangladesh will not experiment with their team combination despite not having two key players in the Test series against Sri Lanka, said Tigers Test captain Mominul Haque.

The Tigers will depart for Sri Lanka today to play two Test matches against the hosts at Pallekele, Kandy which are the parts of ICC World Test Championship, where Bangladesh are yet to score a point after playing five matches.

The selectors have declared a 21-member preliminary squad for the series where four uncapped players were named alongside all-rounder Shuvagata Hom, who hasn’t played a Test match in over four years.

But Mominul, who attended the pre-tour press conference at the Sher-e-Bangla National Stadium on Sunday, told the reporters that they will likely serve as the fringe players as Sri Lanka Cricket authority will not provide any local team for practice match or any net bowlers for practice.

‘As we have failed in 5-6 Test matches and we are looking for a positive result, we can’t do any sort of experimenting.  Experiments should be done in favourable conditions, there is no point of doing experiments in Sri Lanka where we will be playing against the hosts,’ said Mominul.

Ace all-rounder Shakib Al Hasan opted out from the series as he preferred playing in the Indian Premier League to prepare for October’s Twenty20 World Cup over taking part in a battle for a wooden spoon in the ICC Test Championship.

Pacer Mustafizur Rahman, who was also picked by Rajasthan Royals, said that he will skip IPL if he is picked for the Tests but was also overlooked for the series as his performance in the longer version is in decline.

Mominul downplayed their absence, claiming that their absence won’t bring any change in the outcome of the series.

‘I don’t think the absence of Shakib bhai or Mustafiz will have any impact on the result. There are many more players. They are not gifted with 10-12 hands and neither are we. Maybe we are failing to play as a team, that’s why we are not getting the results,’ Mominul told the reporters.

Bangladesh did not play any longer version match before the Test series against West Indies which fetched some criticisms after their debacle against an under-strength Caribbean side.

But this time Mominul feels that the situation is different.

‘Those who were busy with the white ball [in the New Zealand tour], they know what has to be done as they are playing for a long time,’ Mominul said.

Bangladesh will play both the Tests at the Pallekele International Cricket Stadium, where they earned their first victory over Sri Lanka in a one-day international match back in 2013.

Mominul, who scored 11 runs in that match, could hardly remember about playing there before.

‘I have never played there, or maybe in the early days after that stadium was built during 2008 or 2009. I have heard that it has some bounce. Maybe it will be like how the wickets in Sri Lanka usually are, sporting,’ said the left-handed batsman.