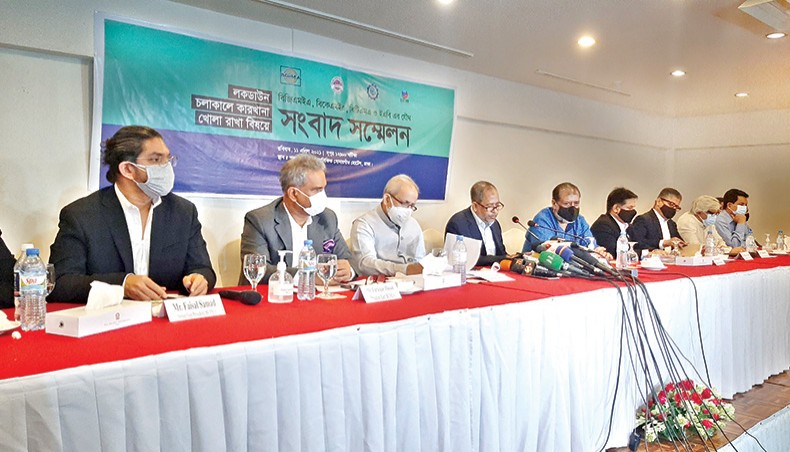 Apparel sector leaders on Sunday said that the government had assured them that factories would remain out of the purview of the ‘complete lockdown’ that might be ordered beginning on April 14.

Following a virtual meeting with senior officials of the government, Bangladesh Garment Manufacturers and Exporters Association president-elect Faruque Hasan said that the government had agreed to keep the export-oriented industries open during the lockdown.

He claimed that that the decision was made by a COVID-19 inter-ministry taskforce meeting presided over by cabinet secretary Khandaker Anwarul Islam.

‘This is a great success and the industry has survived a major crisis. I urged all respected members of the BGMEA to follow all the health and safety protocol very strictly without failure in their factories,’ Faruque said.

Earlier on the day, four trade bodies in apparel and textile sector at a joint press conference demanded that the government allow the RMG businesses to keep garment and textile industries open during the lockdown.

Mohammad Hatem, senior vice-president of the Bangladesh Knitwear Manufacturers and Exporters Association, who attended the meeting with the cabinet secretary, said that all type of industries would remain out of the lockdown.

Sheikh Fazle Fahim, president of the Federation of Bangladesh Chambers of Commerce and Industry, and former BGMEA president Abdus Salam Murshedy, among others, attended the meeting.

At the joint press conference held at the Sonargaon Hotel in the capital Dhaka, leaders of BGMEA, BKMEA, Bangladesh Textile Mills Association and Exporters Association of Bangladesh expressed their fears that if the government brought the apparel sector under the lockdown, competing countries would grab the market share and the livelihoods of a vast number of workers would fall at risk.

They said that if the government brought the apparel sector under the lockdown, the export sector would lose its share on the global market as the factories of competing countries remained open amid the pandemic.

Road transport and bridges minister Obaidul Quader and state minister for public administration Farhad Hossain on Friday said that the government was considering a ‘complete lockdown’ in the country from April 14 to contain the surge of virus infection.

State minister for public administration Farhad Hossain had also said that all the factories would remain closed during the weeklong complete lockdown.

Apparel sector leaders claimed that if the export-oriented RMG factories remained closed during the lockdown, a huge number of workers would move to villages and thus the virus would spread more.

‘Since the beginning of the outbreak of the COVID-19 in the country in March 2020, the infection rate in the apparel sector was very nominal and exporters had run their factories without any casualty as health guidelines were maintained strictly in the units,’ former BGMEA president Shafiul Islam Mohiuddin said.

In the first phase of COVID-19 outbreak, only 709 RMG workers were infected with the virus, he said.

Mohiuddin said that it was a very sensitive issue whether the factories would remain open or not in the forthcoming lockdown.

He said that the government should consider the economy and the interest of workers in making a decision as the apparel and textile sector was struggling to rebound from the COVID fallout of the first phase.

BKMEA president AKM Salim Osman said that only awareness could save lives, no lockdown or curfew could.