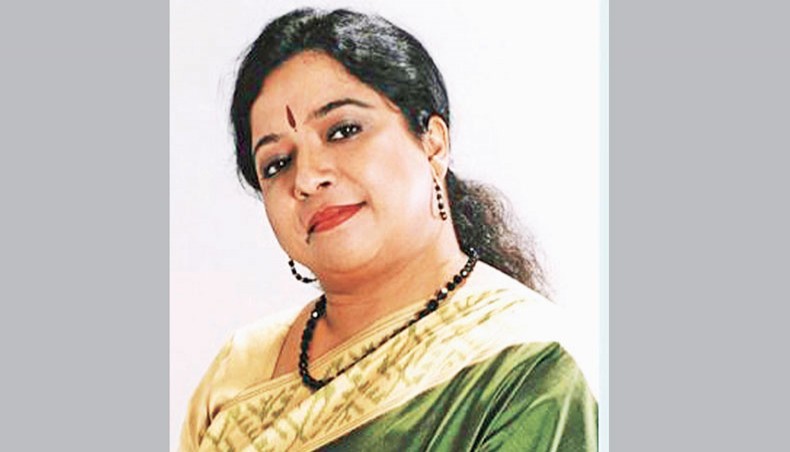 Ekushey Padak winner Tagore singer Mita Haque died of a stroke and a heart attack at a hospital in the capital on Sunday morning. She was 59.

Her son-in-law Mostafiz Shahin confirmed the news to New Age.

‘She breathed her last at about 6:20am on Sunday at Bangladesh Specialised Hospital. We took her to the hospital on Saturday afternoon after she fell sick again,’ said Mostafiz.

‘The duty doctors first took her to the Intensive Care Unit and then put her on ventilation,’ Mostafiz added.

Mita Haque tested positive for COVID-19 on March 25. She was admitted to the Bangladesh Specialised Hospital on March 31. The hospital authorities released her after she tested negative for COVID-19 four days ago.

She again fell seek on Saturday afternoon and was taken to the hospital where she suffered a stroke and a heart attack.

Her body was taken to Chhayanat where her colleagues, students and admirers pay last respects to her. Her namaz-e-janaza was held at Keraniganj at her birthplace after Zuhr prayers on the day. She was buried in Manohariya of Keraniganj beside her parents’ graves.

In a condolence message, the president said people will remember her for the efforts in bringing the ethos of Rabindranath and his music to the people of Bangladesh.

The president and the prime minister prayed for the forgiveness of the soul of the deceased and conveyed their deepest condolences to the bereaved family members.

She was awarded Ekushey Padak in 2020 for her contributions to music.