The ever-expanding universe of ‘Game of Thrones’ 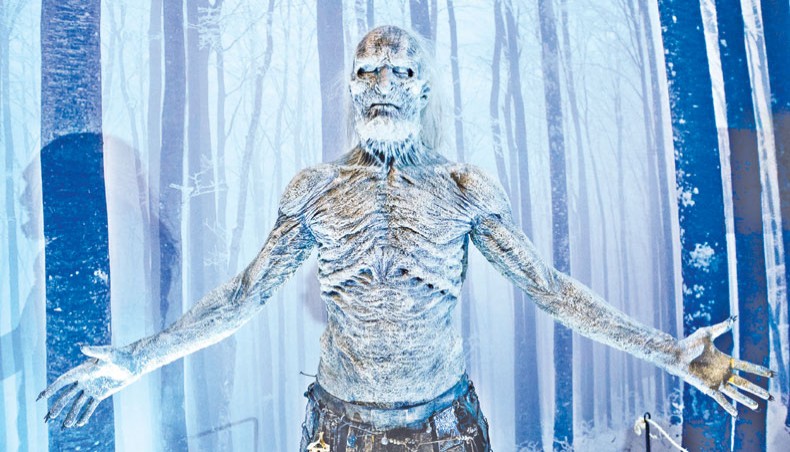 In this file photo taken on March 11, 2015 a model of the White Walker, character from the HBO American fantasy drama television series Game of Thrones is displayed at the International Game of Thrones exhibition in Stockholm. — AFP photo

Ten years after its launch and two years after it ended, ‘Game of Thrones’ fans have plenty more to look forward to, from TV spinoffs to the long-awaited final books.

It’s the question that has driven fans of the Iron Throne to despair: when will author George R.R. Martin finally finish the fantasy saga ‘A Song of Ice and Fire’ on which ‘Game of Thrones’ was based.

The first volume appeared in 1996 and the fifth in 2011, just after the TV show was launched. Two more volumes are due, but the global success of the series appears to have derailed Martin’s work schedule.

Impatience has been building, and with every new project that Martin takes on, there are fears the final volumes may never emerge, especially since Martin is now 72 years old.

In 2020, he assured fans he was working every day on volume six, which is titled ‘The Winds of Winter’ and even hoped to finish it this year.

Martin has plenty more on his plate, however, not least the first TV spinoff, ‘House of the Dragon’, which is set 300 years before the original series and focuses on House Targaryen.

Shooting in England is due to start this month, with a release date on HBO set for 2022. At least two other prequel shows are in development, according to Deadline magazine, but have yet to be given the green light.

Another prequel project starring Naomi Watts and set thousands of years earlier, went as far as producing a pilot episode before it was axed by the network in late 2019.

A ‘Dunk and Egg’ TV series based on Martin’s novellas about a knight and his squire has long been rumoured, while an animated drama spanning thousands of years has also been mooted.

He is also linked to several non-’Thrones’ projects, including ‘Who Fears Death’ and ‘Roadmarks’, both based on fantasy novels from other authors, and an adaptation for Netflix of his early short story ‘Sandkings’.

If that wasn’t enough, there’s also a Broadway version of ‘Game of Thrones’ due in 2023.

‘Game of Thrones’ has also proved a boon for tourism in the locations that featured in the show.

Dubrovnik on the Croatian coast (the stand-in for King’s Landing), the Palace of the Alcazar in Seville (Dorne), and Doune Castle in Scotland (Winterfell) all saw a boost in arrivals prior to the pandemic.

Martin is himself a lover of castles and medieval architecture, and has even tried to get a fort built in his garden in Santa Fe -- though he has yet to get permission.

Fans in desperate need of an immediate ‘Thrones’ fix might also try ‘The Accursed Kings’, a book series by French writer Maurice Druon. Martin has said the historical saga, which follows the Capetian dynasty in the 14th century, was a major inspiration.