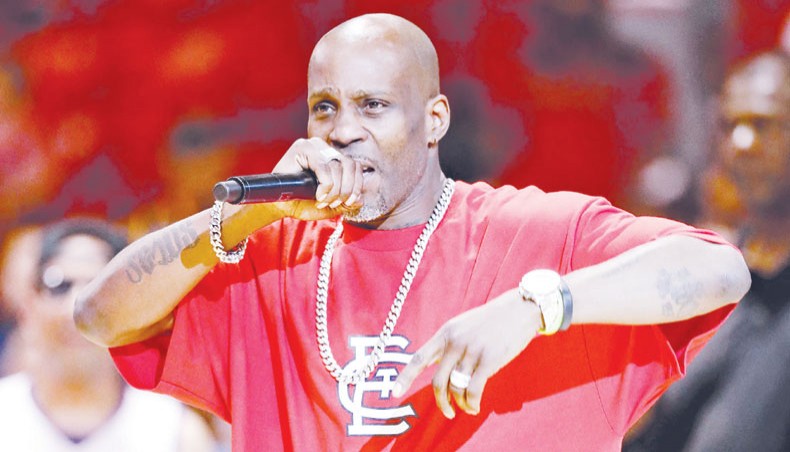 In this file photo taken on July 23, 2017 rapper DMX performs during week five of the BIG3 three on three basketball league at UIC Pavilion in Chicago, Illinois. — AFP photo

DMX, the hardcore hip-hop star whose raw, snarling raps chronicled the struggles of the American street and his own inner pain, has died. He was 50 years old.

The rapper’s longtime lawyer confirmed DMX’s death to AFP, with a statement from his family saying the artist, born Earl Simmons, died after nearly a week on life support following a heart attack.

‘Earl was a warrior who fought till the very end,’ the statement released Friday read, saying the rapper died at White Plains Hospital north of New York City, with loved ones by his side.

‘He loved his family with all of his heart and we cherish the times we spent with him,’ the statement read.

The rapper -- who reigned over the late 1990s and early 2000s with hits including ‘X Gon’ Give It To Ya’ and ‘Party Up’ -- was among hip-hop’s darkest yet most endearing stars.

He laid out his inner demons for the masses in gritty, hard-driving anthems, with a distinctive poetic vulnerability that gained him commercial and critical acclaim.

Raised in the New York suburb of Yonkers, the artist endured a grim childhood, growing up in housing projects with his mother and siblings where he suffered abuse.

Simmons was burdened with a reputation as a problem child, and shuffled in and out of homes for troubled boys for much of his youth.

At 14, he began struggling with addiction and entered a cycle of incarceration, both of which would persist throughout his life.

Even after achieving international celebrity for his artistry, DMX continued to have run-ins with the penal system, with charges including drug possession, animal cruelty, reckless driving, failure to pay child support and tax evasion.

But while his criminal record made headlines, it was his blunt, confessional raps delivered in his powerful, gravelly voice that would cement the artist’s legacy, leaving an indelible mark on hip-hop and gaining him legions of fans.

‘DMX was a brilliant artist and an inspiration to millions around the world. His message of triumph over struggle, his search for the light out of darkness, his pursuit of truth and grace brought us closer to our own humanity,’ said Def Jam Recordings, the label with which DMX released some of his most iconic albums, in a statement following his death.

‘DMX was nothing less than a giant.’

He began beatboxing in the mid-1980s, writing lyrics and peddling mixtapes.

The charismatic artist spent most of the 1990s making a name for himself in New York’s underground scene, especially in rap battle rings.

It was late in that decade that he grew into the blazing, urgent style of performance that would become his calling card, emanating a singular presence at once hypermasculine and sincere.

In the mid-1990s, he famously battled with Brooklyn’s up-and-coming star Jay-Z, who was then primarily an emcee, for hours in a smoky pool hall in the Bronx.

‘It was dope. DMX, at the time, I had never really heard of DMX. I didn’t know who this kid was,’ the producer Ski Beatz, who was in attendance, told the site HipHopDX.

‘But to hear him rhyme live, I was like, ‘This dude is really ill’.’

DMX’s love of dogs was such that he integrated barks and growls into his teeth-baring brand of rap.

He released his debut major-label single ‘Get At Me Dog’ in 1998 with Def Jam, which came off his first studio album ‘It’s Dark and Hell Is Hot.’

The record debuted at number one on Billboard’s top album chart and boasted another hit single, ‘Ruff Ryders’ Anthem,’ ushering in commercial success that would last for years.

Defying his ferocious, testosterone-addled image, DMX also charmed with his goofier side, notably in an impromptu remix of the holiday classic ‘Rudolph the Red-Nosed Reindeer’ that went viral in 2012.

He was vocal about his commitment to Christianity, even expressing hopes of becoming a pastor.

DMX suffered from addiction to drugs including crack, which he said a mentor tricked him into trying at age 14 by lacing a blunt, exposure that led to a life of torment.

‘Why would you do that to a child?’ he said in an emotional interview on rapper Talib Kweli’s weekly podcast in late 2020. ‘I didn’t really have anybody to talk to.’

‘In the hood, nobody wants to hear that... Talking about your problems is viewed as a sign of weakness, when actually it’s one of the bravest things you can do.’

Tributes poured in Friday from fans and fellow artists. T.I. called DMX a ‘cultural icon,’ as Missy Elliott dubbed the loss ‘heavy for the HipHop family.’

Snoop Dogg, who last year faced off with DMX as part of the Verzuz series, posted: ‘What they thought was a battle ended up being a family reunion. Of 2 Doggs who loved everything about each other thank. U. X for loving me back.’