Curtain falls on Games with Ansar on top 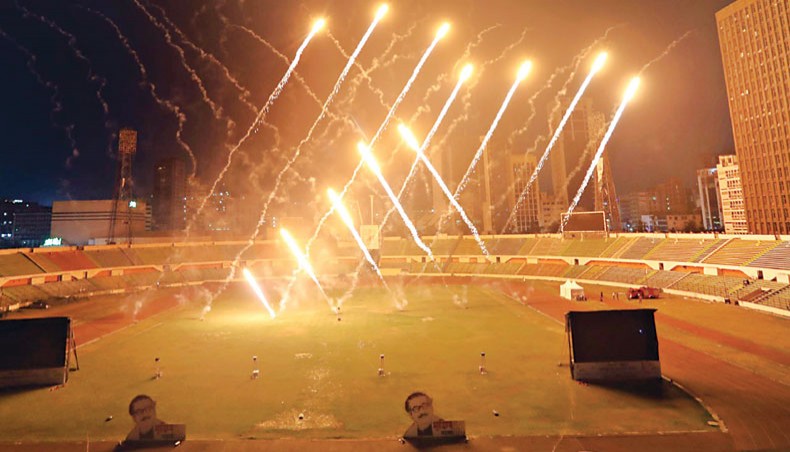 Fireworks explode during the closing ceremony of the ninth Bangabandhu Bangladesh Games at the Bangabandhu National Stadium in Dhaka on Saturday.— BOA photo

The curtain of the 9th Bangabandhu Bangladesh Games fell on Saturday with a simple virtual closing ceremony at the Bangabandhu National Stadium in Dhaka.

Bangladesh Ansar dominated in the multidiscipline competition, finishing with 132 gold medals, the highest out of the participating 363 organisations, which included associations, services teams, clubs and districts.

Ansar also took home 80 silver and 57 bronze medals and to take their total tally of medals to 269.

Bangladesh Army bagged 297 medals, the highest in the Games, but finished second as they ended up with 17 gold medals fewer than Ansar.

A total of 60 new national records were set in this year’s Games, – 34 in weightlifting, 13 in cycling, 11 in swimming, one each in archery and athletics – in this edition.

The 26-year-old swimmer from Jhenaidah was happy after finally excelling at a number of events in the Games and hoped take confidence from here and start winnings medals on the international stage, where her only achievement so far is a bronze medal in the 2016 South Asian Games.

‘After a long time I did well in a number of events… I feel that I can do better on the international stage, if I get good training facilities. We, the swimmers, don’t get sufficient training opportunities,’ Tumpa said.

Meanwhile, in the day’s only event, Jahangirabad Central Zone clinched the four-team men’s cricket event title after beating Varendra North Zone by seven-wicket in the final held at the Shaheed Abdur Rab Serniabat Stadium in Barishal.

Batting first, Varendra posted 270-6 in 50 overs before Jahangirabad chased it down comfortably, reaching 273-3 in just 40.2 overs.

In the ninth edition, some 225 sports organisations finished their campaign without a medal.

The Games officially commenced on April 1.