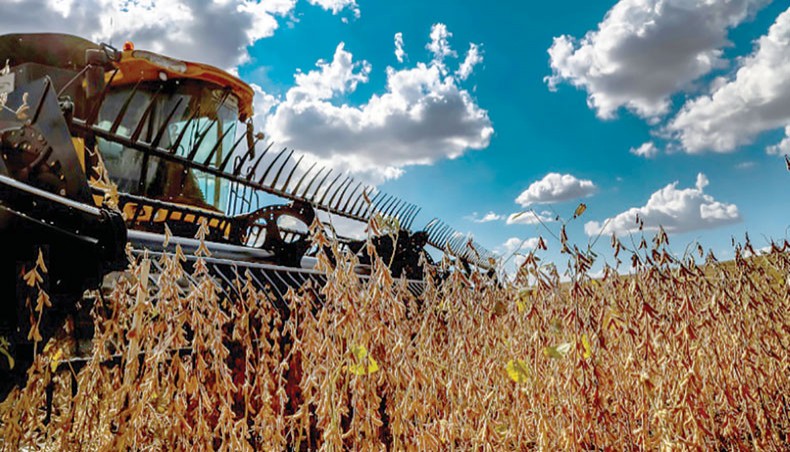 A file photo shows a combine harvester at work at a soya bean field in Brazil. Brazil is on track to harvest record amounts of soya, corn and other grains this year, fuelled by newly booming demand for commodities, particularly from China. — AFP photo

Brazil is on track to harvest record amounts of soya, corn and other grains this year, fuelled by newly booming demand for commodities, particularly from China.

Farmers in the world’s number one soya producer and number three corn producer have been harvesting at a record pace, capitalizing on prices that have leapt to multi-year highs on world markets after plunging because of the coronavirus pandemic last year.

The South American giant got off to a slow start because of a drought last season in key grain-belt states, but now has a bumper crop coming in thanks to superb weather.

‘Grain production in Brazil continues at the record pace we have seen through the 2020-21 harvest season, with growth of 16.8 million tonnes, or 6.5 per cent, over the last harvest,’ the government’s agricultural supply agency, Conab, said on Thursday in its latest update.

The soya harvest is forecast to come in at an all-time high of 135.5 million tonnes, 8.6 per cent above last year’s crop, which was itself a record.

Corn is also on track for a record, with a forecast harvest of 109 million tonnes, up 6.2 per cent.

The huge crop has farmers working full-steam in places like Salto do Jacui, which sits at the heart of farm country in the southern state of Rio Grande do Sul, Brazil’s third-biggest grain producing state.

Working side by side, combines have been plying the golden fields, cropping the sea of soya beans under a bright blue sky.

‘Thanks to great weather we had excellent productivity. And prices are also very high, way above previous years,’ he told AFP on a break from harvesting.

Much of Brazil’s crop will be heading for China, whose rebound from the pandemic has put it back in the market for commodities in a big way.

The Bloomberg Commodity Index is up 32 per cent over the past year, as Beijing’s renewed appetite for raw materials drives prices to multi-year highs.

China has again become a voracious importer of not just soya — which it largely uses for hog feed — but oil, copper, iron ore and coal.

The trend has some analysts wondering whether the world is at the start of a new ‘commodities supercycle.’

But it is likely too early to call. ‘If we are to see the start of a new supercycle, this robust demand growth that we are seeing from China will have to be sustainable for several years,’ said ING bank head of commodities strategy Warren Patterson in a note.