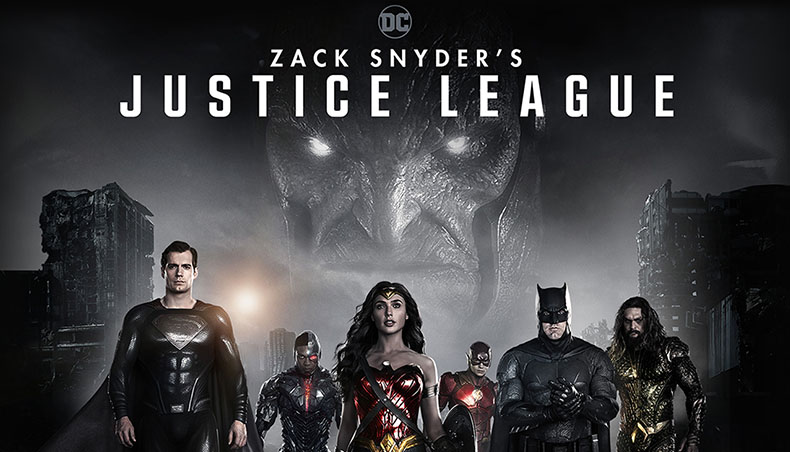 Zack Snyder’s Justice League is the 2021 director’s cut of the American superhero film Justice League, directed by Zack Snyder and distributed by HBO Max. After watching the four-hour version of the DC comics-based film, Syed Laden writes a review

The Justice League is a ludicrous film with few redeeming features. It is a bit more complicated with Zack Snyder’s Justice League.

It is impossible to criticise a film for being an indulgent endurance test if that is exactly what it was striving for. In a post-Snyder cut environment, what would normally be considered criticism has become indistinguishable from praise. These are odd days, to say the least. Zack Snyder’s Justice League is a monumental achievement in blockbuster filmmaking, a cultural curiosity that the director only half-jokingly described as the godfather of superhero movies. It is overlong and often overwhelming.

This greatly extended cut, which clocks in at four hours, two minutes and 40 seconds, reflects Snyder’s unadulterated vision for his troubled DCEU team-up.

Its 10-minute opening credits feature a flashback sequence of the Man of Steel’s death from Batman v Superman: Dawn of Justice, one of the first signs that Snyder’s four-hour version of the superhero spectacle will be nothing like the theatrical version. Meanwhile, almost two hours into the movie, Batman dons his cape for the first time.

You are in luck if you saw Joss Whedon’s version of Justice League in the theatres and felt it needed more F-bombs and a scene where Wonder Woman learned how to properly brew a cup of tea. This is exactly what you requested. For better or worse, this latest iteration has the variety and sentimentality of Peter Jackson’s Lord of the Rings series, but with Snyder’s signature of blood-splatter.

There is not a single scene in Zack Snyder’s Justice League that has not been totally reimagined, extended, or changed by editing, alternative takes, or clear cinematography. And the one truly brilliant set-piece on Themyscira in the theatrical cut is elevated by impactful additions. As a result, rather than the shambling Frankenstein’s monster of the original, this finally feels like the work of a single filmmaking team.

It is unquestionably the filmmaker’s most personal DC Extended Universe project, a film about ponderous super-powered beings as much as it is about parenthood. Knowing what happened behind the scenes — and I cannot imagine someone who is interested in watching this not knowing what happened — just adds to the emotional intensity of the experience.

At around the four-hour mark, the dedication reads, ‘For Autumn,’ which is Snyder’s tribute to his daughter. I stayed for the end credits, exhausted but elated — what’s a few more minutes at this stage, I reasoned — and was treated to Allison Crowe’s stunning cover of Leonard Cohen’s Hallelujah. Autumn’s favourite song was played at her funeral after she committed suicide.

In Zack Snyder’s Justice League, death is a major theme. Almost every central character is dealing with the loss of a loved one in some way. It is what brings them together: an unspoken sorrow and a determination to ensure that no one else suffers as they have.

As Lex Luthor accurately predicted in Batman v Superman, Superman’s demise sends a message to the DC universe villains — God is dead, and the Earth is up for grabs. As a result, Darkseid, the DC version of Marvel’s Thanos, dispatches his henchman Steppenwolf to Earth on a quest to find three Mother Boxes, DC’s version of the Infinity Stones. If they can unite, Darkseid will be able to turn every planet into Apokolips, his homeworld.

The Snyder Cut has a lot of exposition like this, without the Marvel background, of course. As the subject turned to ‘change devices,’ ‘the anti-life equation,’ and everyone’s fascination with either ‘synchronising the peace’ or ‘stopping it,’ I found my focus slipping. Still, I think, that is a part of the appeal.

Wonder Woman, played by Gal Gadot, is still DC’s breakout character, with her early heroics at The Old Bailey a joyous highlight, even though some strange-looking super-speed added to this sequence is an unfortunate detraction. In her solo films, however, Gadot’s success and Wonders’ characterisation are light years ahead. Following Wonder Woman 1984, this somewhat glum Diana looks out of place in Patty Jenkins’ films.

Batman is oddly underutilised. In retrospect, it is obvious that ‘more Batfleck’ was a top-down order for the Whedon cut, resulting in the inclusion of the film’s Bat-centric opening sequence. Bruce does not properly suit up for the better part of two hours in Snyder’s Justice League, and when he does, he is so clearly out of his depth fighting aliens from the stars that he hardly gets involved in the action, either piloting a series of merchandising opportunities or spending the majority of the final showdown taking pot shots with a space rifle from the side-lines – not the most exciting way to spend two hours.

Superman only gets a new obsidian colour scheme in this issue. Similarly, the plot of Aquaman has not changed much, and while Momoa made a good first impression in 2017, you are getting a slightly underwhelming serving of a character who made a much bigger splash in James Wan’s solo film. Ezra Miller’s Flash has some visually stunning Speed Force moments, which take advantage of Snyder’s talent for striking slow-motion tableaux and are greatly improved by Junkie XL’s score, which totally replaces Danny Elfman’s pastiche misfire.

Despite this, it is a film that never quite reaches the dizzying heights of Marvel’s best team-ups, never quite as thrilling as it could have been if we had had meaningful introductions to all of these characters prior to Justice League. It is a strange combination of tone, with deadly serious, world-ending stakes sitting alongside awkward attempts at levity that usually fall flat. One of the worst action scenes Snyder has committed to film is a mid-film set-piece involving the Knightcrawler under Gotham Harbour, set in a bland locale and featuring tedious punch-ups with uninspiring Parademons.

Zack Snyder’s Justice League is unwieldy, indulgent, and often impenetrable as a four-hour film, with all-new cameos and subplots upon subplots that will be lost on all but the most DC-savvy audiences. Although the story’s overall framework — involving DC’s assembled meta-humans racing to stop a space bull from constructing three MacGuffin boxes until they scorch the planet — remains dispiritingly unchanged, it barely registers as something other than an excuse to pass super-humans across the chessboard.

There is not enough story here to justify such a long runtime, and hints at what was planned for future Justice League films featuring Batman, Jared Leto’s Joker, and other characters do not leave you feeling like you are missing out on anything if they are never made. But, given the controversy that has plagued Justice League from the beginning of its troubled production, it is almost a relief to have Snyder’s version out in the world, and the question of what should have been answered. It is an interesting, flawed climax to Snyder’s grand DCEU experiment, neither the magnum opus some might have predicted nor the catastrophic car-wreck of the original.

At the end of the day, Zack Snyder’s Justice League is a redemption story for Batman, who has lived with the guilt of betraying a friend, and for Fisher, who has been fighting a solitary war against a playground bully. Snyder’s redemption arc, though, is probably the most compelling.

Syed Laden is a student of Independent University Bangladesh and an intern at New Age Youth.