Mumbai goes into weeklong lockdown amid upsurge in COVID cases 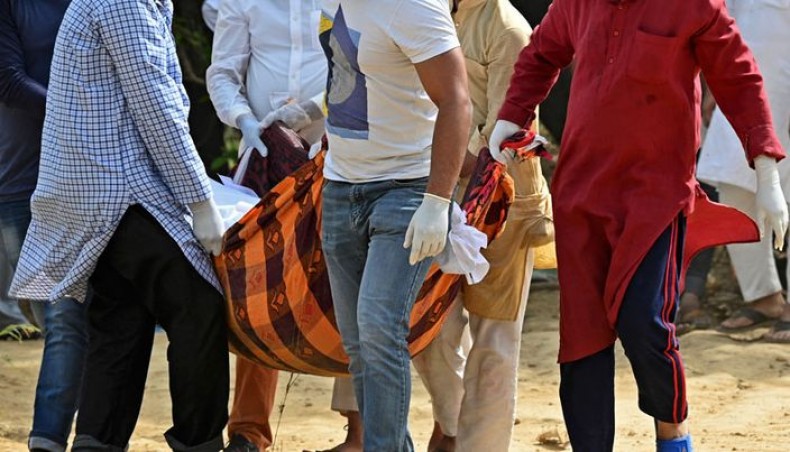 Relatives and friends carry the body of a coronavirus victim during the burial at a graveyard in New Delhi on April 5, 2021. — AFP photo

India’s most coronavirus-hit state Maharashtra went into a weekend lockdown on Saturday as the country battles exploding infection numbers and vaccine shortages.

Having let its guard down with mass religious festivals, political rallies and spectators at cricket matches, the world’s second most populous nation has added more than a million new infections since late March.

After a lockdown a year ago caused widespread misery and hit the economy for six, the central government is desperate to avoid a hugely unpopular second shutdown.

But many states are tightening the screw, in particular the epicentre Maharashtra and its capital Mumbai, where restaurants are shut and public gatherings of more than five people are banned.

Every weekend from Saturday until the end of April the state’s 125 million people are confined to their homes unless shopping for food, medicine or travelling.

‘I’m not for the lockdown at all but I don’t think the government has any other choice,’ media professional Neha Tyagi, 27, told AFP in Mumbai.

‘This lockdown could have been totally avoided if people took the virus seriously.’

Cricket is now played behind closed doors — including the big-bucks Indian Premier League, which began Friday — and in many states including in the capital New Delhi a night curfew is in force.

All eight teams in the IPL, which includes the sport’s top international stars, are in strict bio-bubbles and four players have so far tested positive.

Raipur district, home to the capital of Chhattisgarh state, is under a 10-day lockdown with no one allowed to enter the area unless performing essential services.

The situation at government-run inoculation centres was not much better, with a giant 1,000-bed field hospital turning away people arriving for their first dose on Friday morning.

City authorities tweeted that the shortage was ‘due to non-receipt of stocks’ from the national government.

The Times of India reported Friday that states on average had just over five days of stock left, according to health ministry data, with some regions already grappling with severe shortages.

But the central government has accused some states — run by opposition parties — of ‘distracting attention from their failures’ and playing politics.

‘It is not right to say that there is a vaccine shortage. Vaccines have been made available to all states according to their needs,’ home minister Amit Shah said on Friday.

The CEO of the Serum Institute of India, the world’s biggest vaccine maker by volume, has warned that production capacity is ‘very stressed’.

Poorer countries, as well as some rich nations, have relied heavily on Serum for supplies of the AstraZeneca vaccine, but last month New Delhi put the brakes on exports to prioritise domestic needs.