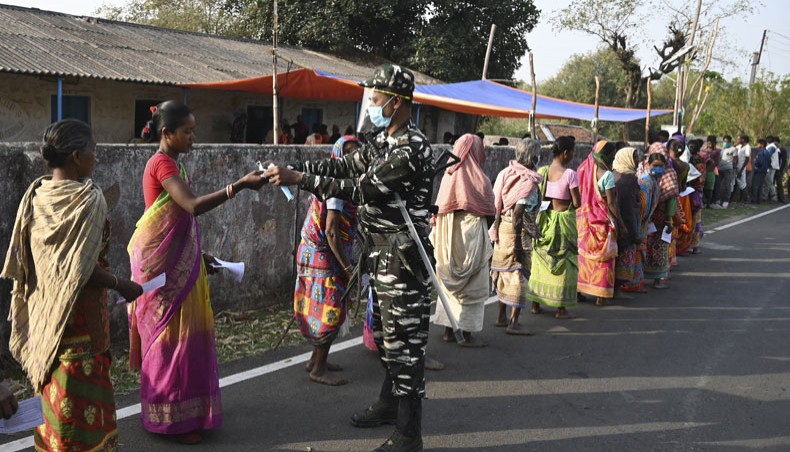 A paramilitary personnel distributes facemasks to voters standing in queue to cast their ballots outside a polling station during Phase 1 of West Bengal's legislative election in Purulia district on March 27, 2021. — AFP file photo

Five people were killed in fresh election bloodshed in the Indian state of West Bengal on Saturday, including four shot dead by paramilitary troops ‘in self-defence’, officials said.

The latest incident in the northern district of Coochbehar 700 kilometres north of Kolkata saw a crowd of around 400 people surround troops guarding a polling station.

‘Paramilitary troops opened fire in self-defence after being challenged by over 400 people,’ a senior Election Commission official said.

‘They also formed a ring around the troops and tried to snatch rifles... Four people were killed in the shooting.’

Elsewhere in the state a man was shot dead on Saturday in clashes between supporters of Banerjee’s All India Trinamool Congress and Modi’s Bharatiya Janata Party, police said.

‘The victim was a BJP supporter,’ local party chief Dilip Ghosh said. ‘Three people who were injured in the clash were admitted to a local health facility.’

Winning power in the state of 90 million people when results are announced on May 2 would be a major victory for Modi.

Banerjee, one of Modi’s most prominent critics, has accused the BJP of attempting to import divisive sectarian politics into the state, which has a large Muslim minority.