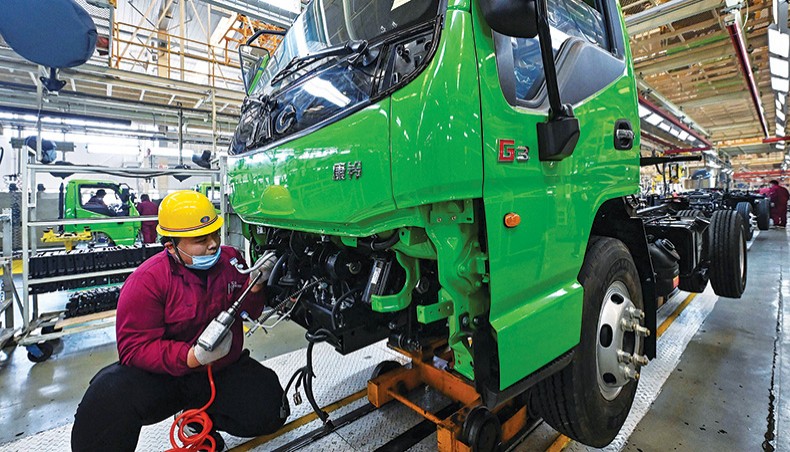 Chinese factory prices hit a more than two-year high in March, data showed on Friday, highlighting the country’s strong recovery but feeding concerns it could filter through to the global economy just as central banks battle to maintain ultraloose monetary policies and low interest rates.

Having largely navigated the pandemic crisis early last year, the Asian powerhouse has enjoyed months of improvement across the board and was the only major economy to expand in 2020.

And now the rollout of vaccines in major markets is gathering pace, demand for China’s goods continues to rise, putting upward pressure on prices in the world’s biggest exporter.

China’s producer price index (PPI), which measures the cost of goods at the factory gate, expanded a forecast-beating 4.4 per cent on-year last month, the National Bureau of Statistics said.

The figure was ‘due to factors such as rising international commodity prices’, including crude oil and iron ore, and boosted by an ‘increase in domestic industrial production and investment demand’, said NBS senior statistician Dong Lijuan.

Analysts had expected the rise in PPI given the low base of comparison last year, when lockdowns and strict movement controls were imposed to stamp out COVID-19.

Observers said that with China the leading exporter in the world, the rises could cause a headache for global central banks, which are already trying to temper worries that an expected surge in economic activity this year will fan inflation and force them to wind back their accommodative monetary policies.

But Nomura chief China economist Lu Ting noted that this time, surging commodity prices have been ‘mainly driven by monetary easing and huge fiscal stimulus — especially in the US — outside China’.

‘As the world’s largest exporter of manufactured goods, higher PPI inflation in China will be inevitably passed to other economies,’ he said.

The Federal Reserve has led the pack in pledging repeatedly that even if inflation does spike, it will not lift its record low interest rates until the US economy is back on track. Still, investors are not totally sold, and yields on US Treasuries — a gauge of future rates — are sitting near one-year highs.

Raymond Yeung at Australia and New Zealand Banking Group added: ‘Our research has found that China’s PPI has a high positive correlation with (consumer prices) in the US.

‘The higher-than-expected PPI data could impact people’s judgement of inflation pressure in the US and globally, and this impact shouldn’t be underestimated.’

China’s economy has bounced back since authorities brought the virus outbreak largely under control, with leaders setting a 2021 growth target of above 6 per cent and a mass vaccination campaign underway.

The International Monetary Fund this week raised its growth forecast for China to 8.4 per cent as well, after the world’s second largest economy became the only major one to expand last year.

Official data Friday showed China’s consumer price index (CPI) rose 0.4 per cent on-year in March, with prices of some food items such as fresh fruit growing but that of pork dropping.

China’s CPI, a key gauge of retail inflation, had in recent years been driven up by pork prices after an African swine fever outbreak ravaged stocks.

This has since stabilised with officials working to boost supplies of the country’s meat staple.