Markets, shopping malls to open from today for 8 hours 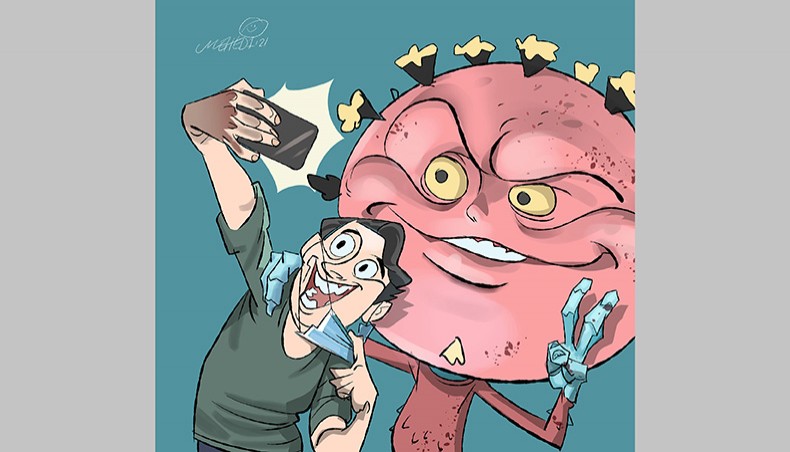 The government on Thursday again backtracked on its weeklong restrictions on public movement and businesses by allowing markets and shopping malls to open from today in the wake of protests against restrictions slapped to curb the tide of COVID-19 infection cases.

A day after public transports were allowed on roads in cities, in a circular issued on Thursday, the Cabinet Division said that shops and shopping malls could be kept open from 9:00am to 5:00pm from today till April 13 on condition of strictly maintaining the health guidelines.

According to the statistics the infection rates were higher in the urban centres and their adjacent areas, especially in Dhaka and Chattogram divisions.

Since the coronavirus detection in March 2020, the country’s 71 per cent cases were from Dhaka division, said the World Health Organisation COVID-19 situation report.

According to the WHO report, over 84 per cent of the cases detected in the country in the last week — between March 29 and April 4 — were from Dhaka division.

The government, however, is relaxing the restrictions, especially in major cities, though experts are dreading severe consequences of such a lax response to a worsening situation.

Public health experts said that the infections are higher in cities and towns and the government’s decision of relaxing the restrictions would lead to more loss of lives and other fallouts.

On the fourth consecutive day of the restrictions on Thursday, people were seen violating health regulations by ignoring the order for mandatory use of masks, maintaining social distancing at all places, using hand sanitisers and not going out of home from 6:00pm to 6:00am without an emergency.

The restrictions also remained on paper only as there has been an apparent absence of efforts by the authorities to monitor breaches of the health guidelines on streets and in public places.

The Cabinet Division on Sunday issued an 11-point instruction restricting public movement and businesses and banning operations of all modes of public transport, including domestic flights, across the country for a week with effect from Monday.

Goods transportation, production activities and emergency services along with people who are going abroad or returning home from foreign countries were, however, kept outside the purview of the ban.

As per the instructions, no one is supposed to be allowed to venture outside home between 6:00pm and 6:00am unless there is an emergency — purchasing medicine and essential commodities, getting health and funeral services. However, people are largely ignoring the instructions.

The latest move followed the 18-point instruction issued on March 29 by the Prime Minister’s Office in the wake of the sudden rise in coronavirus cases and death rate.

On Thursday, the decision of allowing markets and shopping malls came as businessmen in Dhaka and elsewhere in the country had been demonstrating since the very beginning with the demand that the government should allow them to continue their businesses following health guidelines.

The government, also, allowed buses in cities across the country for 12 hours a day until 6:00pm from Wednesday at all city corporation areas including Dhaka and Chattogram metropolitan cities as offices remained open.

The case concentration in Chattogram division was nearly nine per cent and rest of them were from other divisions, according to the WHO report.

Virologist and member of National Technical Advisory Committee on COVID-19, Nazrul Islam told New Age on Thursday that the infection rate is higher in cities and towns, the government’s decision of relaxation of restrictions in would be counterproductive.

‘Our target should be reigning in the infections but the relaxation would not help at all,’ said Nazrul Islam, also former vice-chancellor of Bangabandhu Sheikh Mujib Medical University Hospital.

‘I wonder how the government takes such inconsistent moves in the gap of a few days — first enforcing restrictions and then withdrawing them gradually,’ he said, adding, ‘The government is taking the decisions without consulting experts.’

The suggestions put forth by bureaucrats are being given priority, lamented the virologist.

‘Such inconsistent decisions are not pragmatic nor are they well designed,’ he said, adding, ‘We might have to wait for dire consequences like more deaths and more infections.’

In the capital, since Thursday morning, movement of public buses remained as usual — roads were as busy as any regular weekday.

Buses were seen carrying 50 per cent passengers against capacity when the pressure of passengers was low.

During the rush hours the scenario charged by saying goodbye to the regulation for maintaining social distancing.

People were seen everywhere in the city including on roads, offices, places for worship and kitchen markets engaged in their daily chores.

The situation was similar in the port city in Chattogram.

Road transport and bridges minister Obaidul Quader on Thursday alleged that some of the transport operators were not following the restrictions by continuing services beyond the scheduled period and charging extra fare after the government allowed them to run on roads.

The government would be compelled to become strict again if the violation of conditions set by public transports continues, he added.

Meanwhile in a statement published on Thursday, Passenger Welfare Association of Bangladesh urged the authorities to allow the motorcycles run under ridesharing services considering the livelihoods of people involved in this sector.

Bangladesh Road Transport Authority on March 31 imposed a ban on carrying passengers by motorcycles for two weeks and protesting at the ban, the bikers blocked roads in the capital for at least three days.