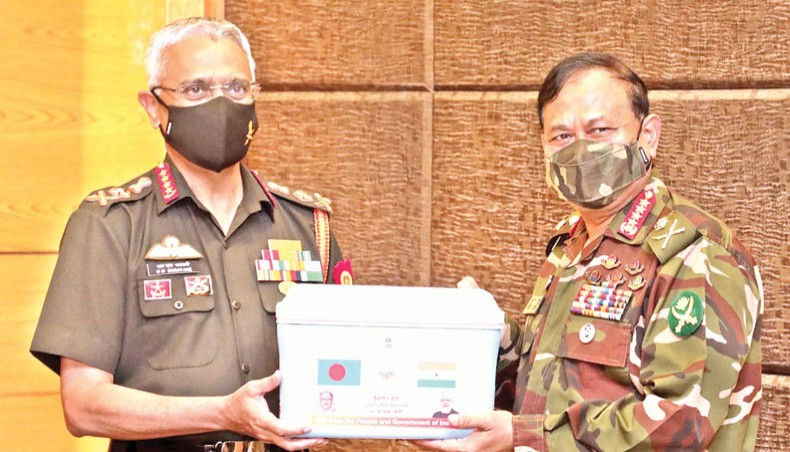 He would attend a number of high profile multilateral and bilateral programmes on invitation from his Bangladeshi counterpart.

Immediately after his arrival, the Indian army chief called on the Bangladesh Army chief General Aziz Ahmed at Dhaka Cantonment, according to press releases issued in Dhaka and New Delhi.

The Bangladesh’s Inter Services Public Relations Directorate in a statement over the bilateral meeting of Indian and Bangladesh army chiefs said that they discussed the implementation of border road organisation, training of army pilots, exchanges of defence experts and trainers, and further mutual defence cooperation.

An Indian Defence Ministry in press release from Delhi said that the Indian army chief would hold one on one meeting with the three services’ chiefs of the Bangladesh’s Armed Forces, and would interact with Bangladesh’s foreign minister AK Abul Momen on April 11.

At Bangladesh Army’s multipurpose complex in Dhaka, he would attend a seminar on UN Peace Support Operations and deliver a keynote address on ‘Changing Nature of Global Conflicts: Role of UN Peacekeepers’.

He would also attend the closing ceremony of Exercise Shantir Ogrosena, where 123 officers and rankers from the armed forces of India, Bangladesh, Bhutan and Sri Lanka along with observers from the United States, United Kingdom, Turkey and the Saudi Arabia, among others, currently attending in Bangabandhu Cantonment in Tangail.