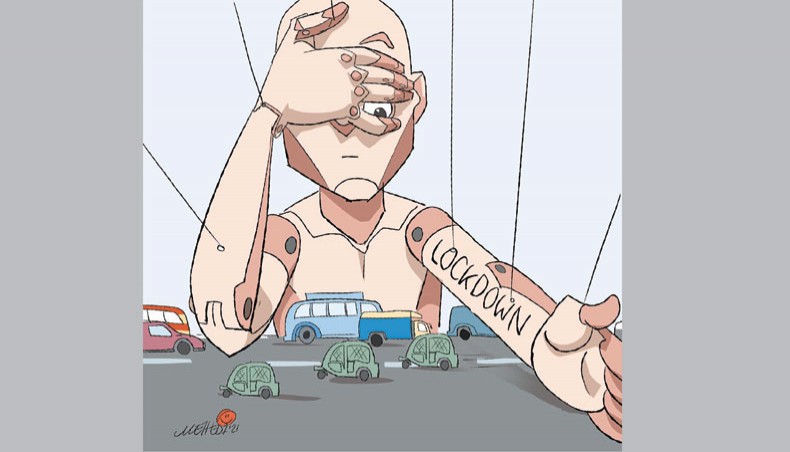 Roads of Dhaka and Chattogram cities on Wednesday witnessed a return to the common scenario of busy traffic on the fourth consecutive day of the weeklong restrictions as the government decided to allow movement of public transports on roads in the major cities.

Only markets and shopping malls remained closed till now as none of the countrywide 11-point instructions that sought to ban public movement and business operation were followed at offices, mosques, kitchen markets and roads.

Meanwhile, traders and shop owners continued their protests for the fourth day on the day by blocking the Gulistan intersection in Dhaka urging the government to allow keeping markets and shopping malls open during the restrictions while the police charged baton to disperse their gatherings.

The police also charged baton on the motorcycle riders in the Moghbazar area in the city after they again resumed their protests against the government ban on carrying passengers by motorcycles.

The government on Sunday issued an 11-point instruction for seven days ordering the closure of markets and shopping malls and banning the operation of all modes of public transport, including domestic flights, across the country effective from 6:00am on Monday.

Since Monday, a ban on the movement of public transports on roads, railways, waterways and domestic flight routes was imposed.

The road transport and bridges ministry on Tuesday lifted the ban on public transports running in all city corporation areas including Dhaka and Chattogram metropolitan cities from Wednesday between 6:00am and 6:00pm at half capacity with increased fares until further notice.

The decision was taken considering the sufferings of people, including government and private jobholders, said the road transport minister Oabidul Quader.

Since Wednesday morning, buses started running in the capital on all routes.

The bus staff members were seen maintaining queues to take 50 per cent passengers inside buses against the seating capacity at areas including Bashabo, Khilgaon, and Bosila while at some places this directive was largely violated as office-going people were seen crowding bus-station areas including Jayrabari, Gulistan, and Mirpur.

Hand sanitisers were not in use nor the vehicles were cleaned before and after every trip as asked by the authorities.

In the city legunas and easy-bikes were seen running at full capacity and passengers also did not show much concern over maintaining social distancing.

In Gazipur city, apparel factory workers were seen waiting on roads due to a shortage of buses and some of them boarded on pick-up vans without maintaining the health guidelines.

In some places, as in Dhamrai, buses were found running on inter-district routes.

New Age correspondent in Chattogram reported that buses resumed regular services on roads since morning and were running on different routes packed with passengers.

Meanwhile, on Wednesday around 11:30am, several hundred traders and shop owners thronged the busy Gulistan intersection in Dhaka saying that though the government imposed restrictions for a week, the city life was pretty much normal.

‘If everything is normal, why can’t we operate businesses?’ asked Alim Ali, a clothe trader of Fulbaria Super Market.

Afzal Hossain, one of the demonstrators, said that they would not be able to bear the shop rent, utility bills and wage of staff without resumption of businesses.

When the police arrived at the spot, they charged baton to disperse the gathering and clear the road.

Bangshal police officer-in-charge Md Shaheen Fakir said that none was critically injured in the incident.

Bangladesh Dokan Malik Samity president Helal Uddin said that traders were asked not to create anarchy; but, a quarter took to the street.

‘It is the peak time for business as Ramadan is right around the corner. So we urge the government to allow us to resume our businesses,’ he said.

A huge number of agitated motorcycle riders under the ridesharing services blocked the roads in Moghbazar intersection, Bailey Road near Dhaka Metropolitan Police headquarters, Hatirjheel intersection, Tejgaon, in front of the Press Club, Shymoli, Khilkhet, Uttara, and Mirpur 1 areas in Dhaka demanding an immediate withdrawal of the ban on motorcycles running under ridesharing services.

Following 18 directives issued by the government on March 29, Bangladesh Road Transport Authority on March 31 issued a circular imposing a ban on carrying passengers by motorcycles for two weeks and protesting at the ban, the bikers blocked roads in the capital on March 31 and April 1.

During the demonstration, the police charged batons on some of the protesters to disperse the gathering.

The bikers then blocked the Hatirjheel intersection where police again intervened and requested them to meet DMP officials at its headquarters.

Later in the afternoon, a section of the protesters went to the DMP headquarters.

Protesters said that the government resumed the services of buses in the capital during the restriction period but police were filing cases against them when they were carrying any pillion rider.

They said that they need to earn a living and urged the authorities to withdraw the ban on their services.

DMP additional commissioner of the traffic section Md Munibur Rahman told New Age that the police were enforcing the government order and if the ban continues till April 14 the bikers would have to follow it.

The demonstrations by the bikers triggered traffic congestions.

The bikers, however, continued to carry passengers and the CNG-run auto-rickshaw drivers were seen carrying even four passengers as they also facilitated shared rides in different places in the capital.

Passengers rush to get on a bus at Mohammadpur in Dhaka on Wednesday after buses were allowed to run at half capacity amid the weeklong government-imposed restrictions on public transport. — Sony Ramany

Ridesharing service providers shout slogans during a demonstration in front of the National Press Club in Dhaka on Wednesday in protest against the government-imposed temporary ban on the service. — New Age photo