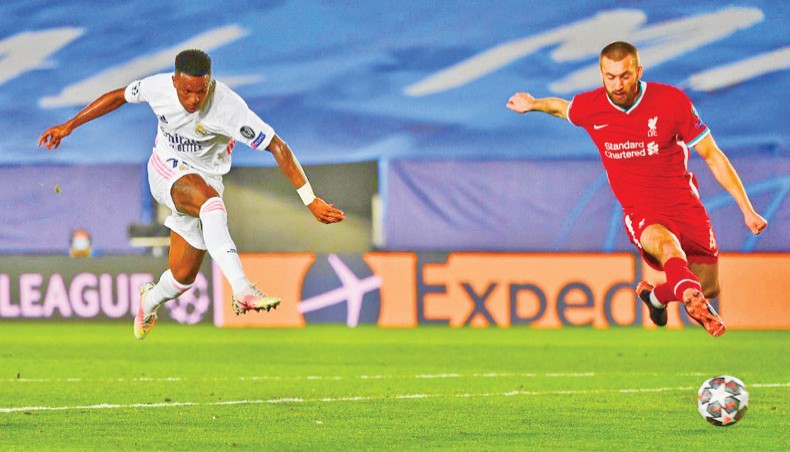 Real Madrid have made a habit of saving their best for the biggest moments of the season and their 3-1 win over Liverpool in the Champions League on Tuesday suggested they could be ready to do it again.

Madrid rolled back the years with a performance reminiscent of their most ruthless days under Zinedine Zidane, when they powered through the knock-out stages to win three European titles in a row, or motored to 10 consecutive victories at the end of last season to win La Liga.

A pivotal eight days that pitched two quarter-final legs against Liverpool either side of Saturday’s Clasico against Barcelona got off to the perfect start, Vinicius Junior’s double and a Toni Kroos masterclass at the Alfredo di Stefano stadium putting Madrid in sight of another Champions League semi-final.

Mohamed Salah’s away goal early in the second half, and Liverpool’s comeback from a more desperate situation against Barcelona in 2019, should serve as warnings against complacency.

But an imperious and authoritative display enhances the growing sense of a Madrid team now plugged in, its eyes narrowing again just as the trophies come into view.

‘It is the character that this team has, that all the players go through difficult times but I know they have this character to turn things around,’ said Zidane on Tuesday night.

‘Madrid erased Liverpool in the first half, the Reds were baffled,’ wrote Madrid newspaper AS on Wednesday. ‘It was a complete performance,’ said Jorge Valdano on Spanish television.

In Spain, many wondered if Barcelona and Atletico would enjoy an advantage in the final stretch, their own early exits in the Champions League allowing them to focus fully on what has now become a neck-and-neck battle for the title.

Barca might still feel the benefits of an extra day’s rest in the Clasico this weekend, their tight victory over Real Valladolid on Monday night possibly less demanding as well than Madrid’s demolition at Valdebebas.

And yet it may also be that Madrid benefit from the build-up of momentum, the compression of climax fixtures ensuring their already trophy-laden squad has no time now to look away or let up.

‘They are players who have won a lot but still want more and that shows you the character these players have,’ said Zidane.

The 31-year-old Kroos, with 22 club titles and a World Cup to his name, was irrepressible against Liverpool, his surgical passing from deep laying the platform for Madrid’s control and conviction.

‘Toni is incredible, a legend of the club. Whenever he goes out on the pitch he goes out with class. Nobody can play like him,’ said Vinicius.

‘It was probably one of his best games in his best season for a player who is possibly the best midfielder in the world,’ wrote Marca.

Kroos was the architect this time but his brilliance was just the latest example in a recent surge for Zidane’s old guard.

Modric has been flawless since the turn of the year, Casemiro unwavering and Karim Benzema, although quiet against Liverpool, could arguably be La Liga’s player of the season.

It may be no coincidence Madrid’s veterans have roused themselves while the club ponders who to discard and who to preserve in its shift towards the next generation. Ramos and Modric are out of contract this summer while next year, Benzema’s deal expires too.

But the crescendo is also familiar, a throwback to previous years when Real Madrid stumbled through the mundane months of a campaign, only to find their groove when it matters.

‘They always want more,’ said Zidane. ‘This team has no limits.’