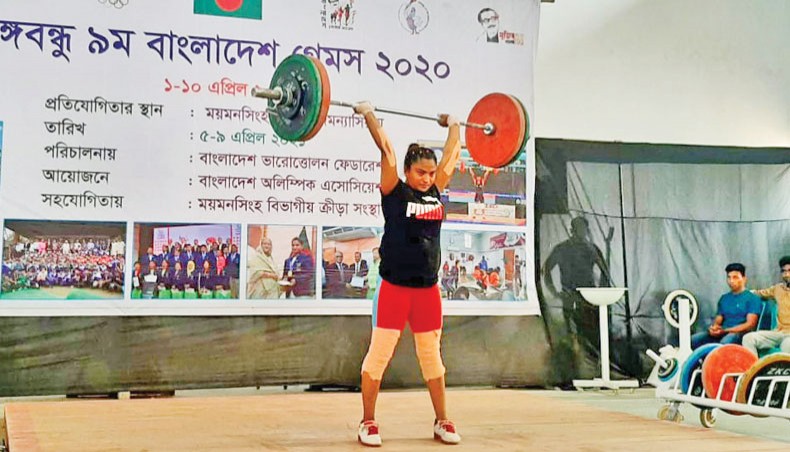 Mabia won gold in the women’s 64kg weight category after lifting a total of 181 kg – 101kg in clean-and-jerk and 80kg in snatch– to surpass the previous national record of 179kg, which was also set by her in the inter-service competition in 2018.

After breaking the national record on Wednesday, the Ansar team athlete said she now wants to take part in the Olympics.

Mabia said that she has a chance to qualify for the mega event if she performs well in the Asian Championship competition in Uzbekistan, set to take place later this month.

‘If I can do well in Uzbekistan, I will get a ticket to compete in the Tokyo Olympics. I am working hard for it,’ she added.

In the other weightlifting events, Ansar’s Suman Chandra Roy bagged gold in the men’s 81kg weight category, lifting 260kgs – 147kg in clean-and-jerk and 113kg in snatch.

Army’s Farzana Akter Riya won gold in the women’s 71kg category, lifting a total of 138kgs – 78kg in clean-and-jerk and 60kg in snatch.

Army bagged the title in men’s football after beating Sylhet district by 2-0 goals in the final of the 10-team tournament at the Shaheed Dhirendranath Datta Stadium in Cumilla.

In cricket, Varendra North Zone reached the final after a 36-run win over Chattola East Zone in the men’s event held at the Shaheed Abdur Rab Serniabat Stadium in Barishal on Wednesday.

Varendra will play the final at the same venue on April 10 against the winners of the last league match between Jahangirabad Central Zone and Chandradeep South Zone, which will take place on April 8.