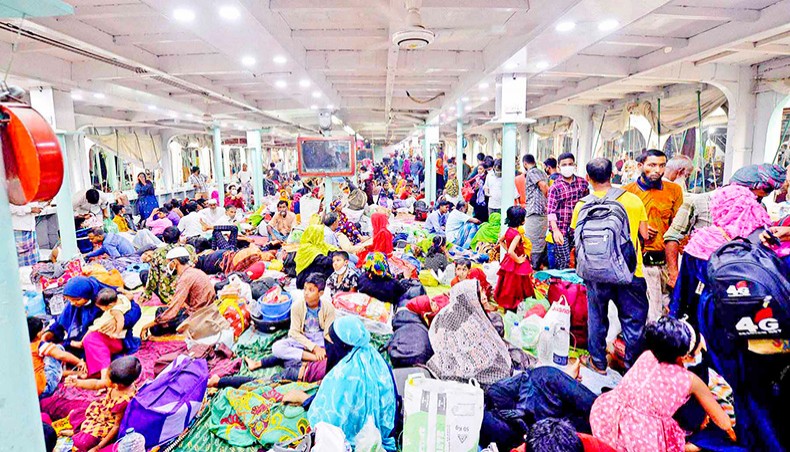 People cram on a ferry to travel back to their homes in Dhaka on April 4 the day before the government imposed lockdown as a preventive measure against the COVID-19 infection. — Agence France-Presse/Munir Uz Zaman

SARS-CoV-2 infection is on the increase again. The issue needs to be to closely monitored and reviewed to overcome the crisis, alleviate sufferings of the people and keep the number of death to a minimum. The first cases of infection in Bangladesh were reported on March 8, 2020 and the first death from the disease was reported on March 18 that year.

When the disease broke out in Bangladesh, it had already traversed through Europe, America and the Middle East after its first detection in Wuhan in China in December 2019. It soon became clear that our preparations to combat the disease were inadequate. We could not take the advantage of the two and a half months that we had between the first-ever detection of the disease and its detection in Bangladesh to understand the nature of the disease and to formulate a proper action plan to identify the disease, manage it and prevent its spread. As a result, the beginning began with a chaotic situation in the healthcare system.

People have learnt a lot about this disease in the past one year. Two to four months after the initial state of confusion, the initial panic was gone. In the meantime, everyone has had more or less an idea of what should be done at the individual and the collective level to deal with the disease. It became clear from examples of other countries that the basic policy to deal with this disease is to prevent its spread so that the number of patients requiring hospital admission could be kept limited within the capacity. The steps taken to this end in almost all countries affected by the disease included, among others, such measures as patient identification, isolation and quarantine, hand washing with soap or hand sanitisation, the wearing of masks, restrictions on international flights and limited or all-inclusive lockdown internally. Measures such as lockdown, which was named as ‘general holiday’ in Bangladesh, appeared to be a major setback for industries, businesses and the poor and low-income people, which forced the government to withdraw the restrictions after a couple of months although the infection situation could not be controlled.

After the level of infection reached a peak in usual course of an epidemic, it began to decline at a certain point and by the end of 2020, it was more or less under control. However, scientists repeatedly warned that the pandemic could come back again in a more devastating form. They were talking about the Spanish flu that took place a hundred years ago, the second wave of which was much more devastating than the first one. In many countries, after the infection rate had come under control, it was increasing again. So, it was expected that another wave of the pandemic could hit the country at a certain point. As the infection affects primarily the respiratory tract, it was feared that the second wave might come in the winter.

For this reason, even though the government opened everything, it did not open educational institutions. The winter has passed well. The country also received a shipment of vaccine early this year, which was an important milestone in the fight against COVID-19. Some scientists were coming up with the idea that by the end of 2020, the prevalence of infection in general population could reach the level of producing herd immunity among people.

When this had been the overall situation, a large section of the public was left feeling somewhat complacent. In January-February, the infection rate dropped to its all-time low. Some people started thinking that the disease had gone. Many began to care less about issues such as wearing masks and social distancing. There were socio-political and religious gatherings, wedding ceremonies, etc all around. There were huge crowds at tourist spots. As a result, the wave that did not come in the winter appears to have come, but at the beginning of the summer. Infection began to increase from the beginning of March and soon it soon gained a high momentum. This second round has become more severe than the first one, not only in the rate of infection, but also in its morbidity. This time as many as 40 to 50 per cent of the patients are reported to be needing need oxygen.

According to the latest statistics, the daily infection rate has already crossed 7,000, breaking all past records. Experts believe that the negligence of people to health protocols in recent days has played a major role in increasing the rate of infection. However, the exact cause of the sudden increase in the rate of infection is a matter of research. In addition to the neglect of health protocols, many other factors might have had a role. Mutation might have made the virus more powerful. In addition, the genome sequencing of samples has also confirmed the presence of UK and South African variants of the virus, which are capable of transmitting much faster. There is also the opinion that when many people stay in a closed room with air-conditioner or fan running during hot weather, it becomes an ideal environment for the spread of the infection.

It is a matter of concern that almost all beds available for COVID-19 patients in hospitals, general and intensive care unit, are now almost filled. The healthcare system might collapse if the rate at which the infection is increasing cannot be stopped. A shipment of vaccines has already arrived and it is a matter of time to get the required number of vaccines to bring a significant proportion of people under vaccination and complete the implementation of this programme. Apart from that, the vaccines that have been developed so far may not be equally effective against all new variants that are emerging through mutation.

Against this backdrop, the government has announced lockdown for a week, subject to certain restrictions, to curb a rapid spread of the infection. However, there were two immediate problems. First, a large number of people dependent on daily income are running towards villages. In many cases, people are travelling without heeding health protocols and, thus, playing a role in spreading the infection on the way. Moreover, many feel that the village-bound flow of people is spreading the infection from urban to remote areas. Second, with the sudden announcement of lockdown without proper alternative arrangements, office-goers are suffering to get to the institutions or factories that are open. Many believe that this measure would have been more effective if it had been taken in early March when there was a clear trend of increasing infection.

Although announced for a week, many believe that the lockdown period could be extended. In the light of past experiences, it can be said that it is very difficult to impose and implement a complete lockdown because of the socio-economic reality. How effective can a partial lockdown be? Good results may be expected if offices and factories are run keeping to a schedule with not more than 50 per cent of officers and employees by turn a day. This will control the presence of many people in offices and factories and, at the same time, will also reduce the transport problems. In financial organisations such as banks or other service providers, where a large number of customers gather, reducing the transaction time would rather increase the crowding of people. This can create an environment of COVID-19 proliferation rather than control.

As it is not easy to successfully implement extreme measures such as lockdown in a country like Bangladesh, we should place more emphasis on ensuring measures such as mask wearing and social distancing. Such measures do not involve that much financial tug-of-war that lockdown periods do. The reason for our limited success in the past in this regard is that we have not been able to motivate people properly. This is not possible only by policing. It seems that the best results can come if local people could effectively be involved in the process. If volunteer teams composed of local political and social activists and students and teachers, irrespective of party affiliation, could be mobilised in each locality in collaboration with the law enforcement agencies, the public could be motivated to a satisfactory level. The results that may come this way may not be achieved by the law enforcement alone.

Dr Mohammad Didare Alam Muhsin is a professor of pharmacy in Jahangirnagar University.