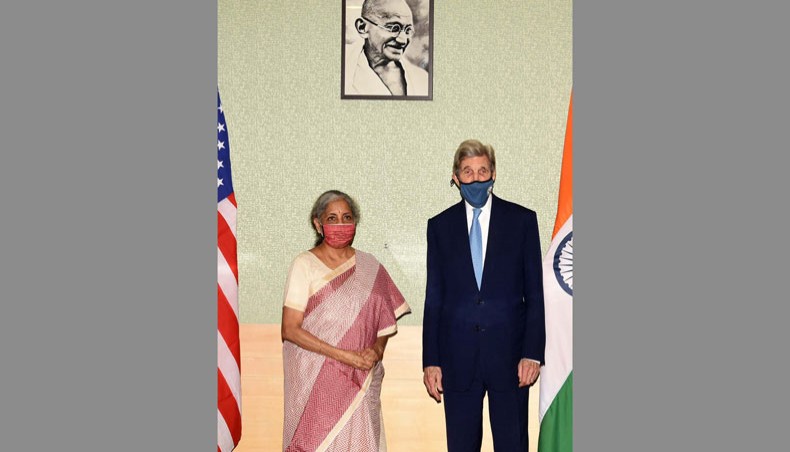 In this handout photograph taken on April 6, 2021 and released by the Indian Press Information Bureau Union minister for finance and corporate affairs Nirmala Sitharaman and US special presidential envoy for climate John Kerry, right, pose for a picture during their meeting in New Delhi. — AFP Photo

United Satates climate envoy John Kerry praised India as a ‘world leader’ in renewable energy but said during a visit to the fossil fuel-dependent nation that the globe needs to phase out coal faster.

India is the world’s third-biggest emitter of carbon dioxide and relies on fossil fuels to generate around two-thirds of its electricity. Its role in tackling global warming is seen as vital.

Kerry, in New Delhi before a virtual climate summit on April 22 and 23 organised by US President Joe Biden, lauded India’s ‘remarkable transformation’ into a ‘world leader in the deployment of renewable energy’.

‘Prime minister Modi’s announcement of a target of 450 gigawatts of renewables by 2030 sets a very strong example for how to power a growing economy with clean energy,’ Kerry told the South Asia Women in Energy Leadership Summit on Tuesday.

‘It’s already cheaper to build solar in India than anywhere else in the world. That kind of urgency is exactly what we need to confront global climate change,’ he said, calling the country a ‘red-hot investment opportunity’ for green power.

But without mentioning India directly, Kerry said that in order to keep global temperature rise below 1.5 degrees Celsius, coal needs to be phased out ‘five times faster’ than the current pace.

Trillions of dollars were needed to finance the planet’s transition to renewable fuels and he would work closely with New Delhi ‘so that we drive investment flows toward the clean energy opportunity in India’, Kerry added.

The US State Department said Kerry’s April 1-9 trip to India as well as the United Arab Emirates and Bangladesh was aimed at ‘increasing climate ambition’ ahead of the Biden summit and UN climate negotiations in Scotland in November.

Bloomberg News reported last month that top Indian government officials were debating whether to follow dozens of other countries in setting a goal of net zero emissions by mid-century, a decade earlier than China.

India may however baulk at laying out such a target because that would require a major overhaul of its fast-expanding and heavily coal-dependent economy as well as enormous amounts of funding.

The International Energy Agency said in a February report that India’s carbon dioxide emissions are on course to rise 50 per cent by 2040 -- enough to offset entirely the projected fall in emissions in Europe over the same period.

To put India on a ‘sustainable path’ over the next 20 years would require additional funding of $1.4 trillion -- 70 per cent more than its current policies allow, the IEA said.

India and other poorer countries want wealthier regions to do the heavier lifting in reducing emissions, saying they are historically more responsible for global warming and have much bigger per-capita footprints.

The White House has said the United States will announce an ‘ambitious 2030 emissions target’ ahead of this month’s virtual summit of 40 leaders that will include Modi and Chinese president Xi Jinping.