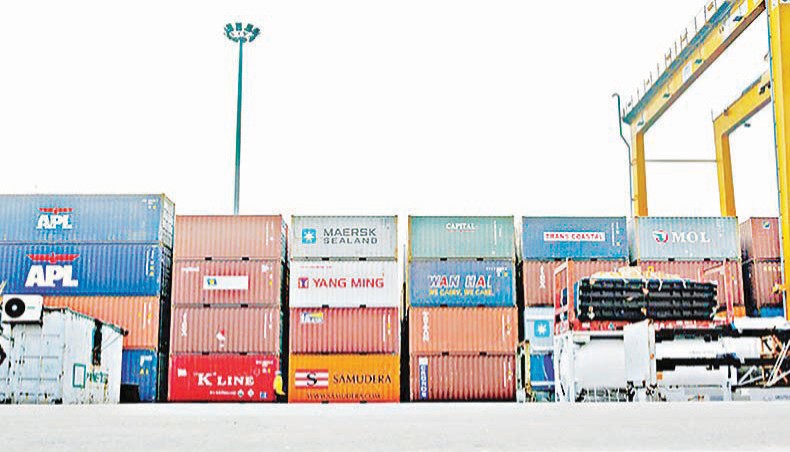 A file photo shows containers at the Chattogram port. The country’s export earnings fell by 0.12 per cent to $28.93 billion In the July-March period of the current financial year 2020-21 from $28.97 billion in the same period of the previous fiscal year amid the COVID-19 outbreak. — New Age photo

The country’s export earnings fell by 0.12 per cent to $28.93 billion In the July-March period of the current financial year 2020-21 from $28.97 billion in the same period of the previous fiscal year amid the COVID-19 outbreak.

The earnings, however, grew by 12.59 per cent year-on-year in March 2021, riding on an increased shipment of readymade garments as the exports started recovering from the damages caused by the COVID-19 pandemic.

Export earnings in March 2021 increased to $3.07 billion from $2.73 billion in the same month of the previous year, according to the Export Promotion Bureau data released on Tuesday.

Exporters said that the earnings in March 2021 showed that the country’s export sector started coming back on track after suffering the negative impact of the coronavirus pandemic.

They, however, feared that the recent deterioration in the COVID-19 situation in the country could hit the sector again.

Export earnings in March 2020 had experienced an 18.29-per cent negative growth year-on-year as the COVID-19 outbreak began in the country in the month and factories were closed for few days, they said.

‘Since the first wave of COVID-19 hit our country in March 2020, particularly the exports started getting affected since March 2020, a year-over-year comparison of monthly exports between 2020 and 2021 would be misleading; thus the growth in export for the months of 2021 has to be calculated with the corresponding months of 2019,’ Bangladesh Garment Manufacturers and Exporters Association president Rubana Huq told New Age on Tuesday.

The latest export data released by the EPB for the period of July-March of FY 2020-21 continues revealing the depressing scenario in export earnings, she said.

‘We are in a process of total recovery from the negative impact of COVID-19,’ said Fazlul Hoque, managing director of Plummy Fashions Ltd.

Fazlul Hoque, also a former president of the Bangladesh Knitwear Manufacturers and Exporters Association, said that although the export sector was in a process of recovery, the recent shutdown in the country created some worries.

Due to an alarming rise in COVID-19 infection cases and deaths, the government is enforcing a seven-day shutdown from Monday.

Rubana said that the woven garments were facing the toughest time ever, while export has suffered a double-digit decline since August 2020, and in the month of March 2021 compared to March 2019, woven export fell by 27.70 per cent.

‘Knitwear export struggled to retain 0.35 per cent growth in March 2021 over March 2019; the average growth of knitwear export for July-March of FY21 than the same period of FY19 is 1.15 per cent negative,’ the BGMEA president said.

She also said that the export markets were still struggling to contain the spread of the virus, the third wave has only added to the woes.

Export earnings from agricultural products in the period increased by 3.43 per cent to $746.72 million from $721.98 million.