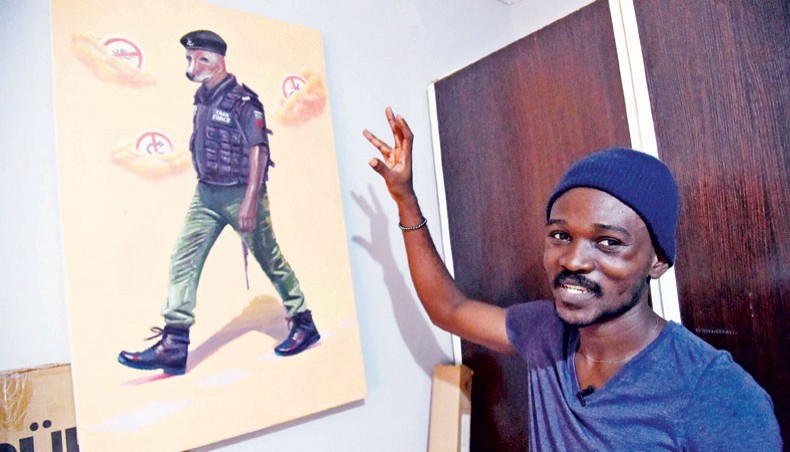 Painter Julius Agbaje points to a painting of police officer with dog head that he titled ‘Mad Dog’ at his studio residence in Ipaja, Lagos, on March 25, 2021. — AFP photo

When in 2019 Nigerian painter Julius Agbaje depicted President Muhammadu Buhari as the Joker, he never imagined that a year later his portrait would become a symbol of youth protest.

His image, ‘Joke’s on You,’ showing Buhari with a red nose, white makeup and a terrifying smile, was the emblem of demonstrations against police brutality that rocked the country last October.

‘At first it was a joke, just a provocation,’ the 28-year-old artist said in his tiny studio in a rundown district of Lagos.

‘Months after, this piece went viral, and resonated with a lot of youth.’

Even before the Joker image, Agbaje had already earned a place on Nigeria’s vibrant cultural scene. He is also one of its most committed artists.

‘I always dare to challenge things, especially wherever there is injustice. I love to be provocative, and art gives me a channel though (which) I could express that vexation, to fight those injustices.’

Nigeria, with its 200 million inhabitants, may well be considered Africa’s largest democracy, but it has barely turned the page on its history of military dictatorships.

More than 20 years after its democratic transition, the country remains plagued by corrupt politics, rampant poverty and violations of basic rights.

Between acrylic pots and worn brushes, Agbaje rolls out his canvases on the tiled floor of his studio for a visitor.

The ‘social satirist’, as he likes to call himself, Agbaje knows few taboos.

Take his portrait of a nun painted as a chimpanzee, with a nose piercing, tattoo, and plunging neckline -- risky content in a country where religious beliefs are strong and where blasphemy is often branded the worst of sins.

‘I wanted to denounce the hypocrisy of religion in Nigeria,’ says Agbaje, himself the son of a pastor and a teacher.

But the strength of his caricatures, which are as funny as they are shocking, is also thanks to their technical skill.

He learned his craft at the oldest art school in Lagos, the Yaba College of Technology, from where he graduated in 2017.

His dexterity comes to the fore in a portrait made with knives of two monkeys -- the figures, wearing police helmets, are seen in mugshots, with signs around their necks saying ‘murder’ and ‘duplicity & theft’.

The image is now on display at his art school’s museum.

‘Strangely enough so many people have reacted to this piece, It has drawn a lot of attention and discussion, and also got its own nickname -- ‘The Monkey Piece’,’ says his former teacher Odun Orimolade.

The young artist picked up his brushes again when last year’s youth protest movement was brutally suppressed. Amnesty International said the army opened fire and killed at least 10 people, a charge the military has denied.

From this ‘trauma’ and ‘this anger’ three paintings were born.

Far from his caricatures, they are perhaps his most successful, at least his most poignant.

With a blood-red background, one of them shows a shirtless black man raising his fist. In place of his face, the artist painted a shooting range target riddled with bullets.

On the ground, upturned barricades recall those of the Lagos tollgate booth where the army allegedly opened fire on peaceful demonstrators.

‘It is an account of what happened on the day as the government came out to deny any hand in the matter,’ he said.

‘I felt it is important to document the event with my art, for the sake of posterity.’

These are the ‘evils of his society’ that the young painter wants to fight with his art.

In Nigeria, there is an abundance of artists who criticise the political system, but many use only abstract images, few do so in such a confrontational way.

Among his influences, Agbaje cites the Nigerian performer Jelili Atiku, who denounced extrajudicial executions for years, leading to his arrest in 2016.

‘It’s scary to be honest..., it must be said, because I realise that some people sacrificed before I came,’ Agbaje said.

‘And because of those sacrifices... I can even enjoy some of this semblance of freedom that I enjoyed today, I feel that is my duty.’