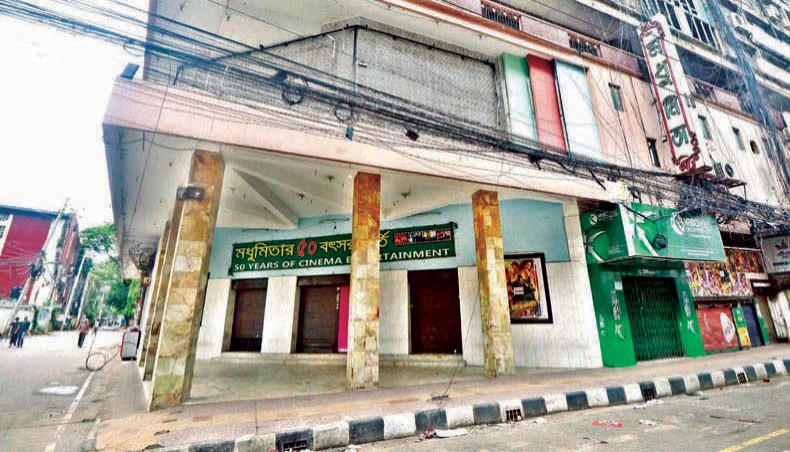 File photo shows a front view of Madhumita Cinema, which is looking forward to resume its operation in Eid-ul-Fitr. The cinema has been closed since March 18, 2020.

With the closure of the leading cinemas in Dhaka during the seven-day restrictions imposed by the government, the cinema business is losing its momentum gradually amid the COVID-19 outbreak.

The government on Sunday put a ban on public movement and business operation due to the second wave of COVID-19 infections and the struggling cinemas across the capital once again are bearing the brunt of the health emergency.

However, the government and Bangladesh Film Exhibitors’ Association have not issued any directives for closing cinemas during the seven-day restrictions freshly imposed across the country.

Bangladesh Film Exhibitors’ Association chief advisor Sudipta Kumar Das said that there are no directives from the government to shut the cinemas during the government imposed restrictions.

‘We have not given any directives to cinemas to shut down and cease operation as we are following the government directives. Many cinemas are running their operations with half the capacity and as they cannot screen films after 6:00pm, keeping the cinemas open will not bear any fruit,’ said Sudipta Kumar Das.

‘If the situation continues, many cinemas will shut down automatically within a week,’ Sudipta added.

Cinemas across the country were shut down on March 18, 2020 due to the emergence of the COVID-19 outbreak and they reopened on October 16, 2020, following the COVID-19 health safety guidelines, including running at half capacity after the coronavirus infection rate dropped.

Cinema owners suffered huge revenue losses as they could not screen films during Eid-ul-Fitr and Eid-ul-Azha festivals in 2020. Cinemas were trying their best to recover their

losses suffered in 2020 and have been looking forward to screening films in the upcoming Eid-ul-Fitr.

However, leading cinemas in the capital including Star Cineplex, Blockbuster Cinemas, Shyamoli Cinema Complex and others shut their doors as the government decided to close all shopping malls across the country. As a result, they are worried about their revenue losses as they fear that the shutdown period may get extended further ahead of Eid-ul-Fitr.

Cinema owners and officials of different cinemas said that if the government-imposed restrictions continue, they would miss out on the opportunity to do business during Eid.

Mesbah Uddin Ahmed, senior marketing manager of Star Cineplex said, ‘We have already closed all our outlets in different shopping malls in the capital from Sunday. If the situation continues, we will suffer a huge loss as we have to pay the salary of our staff members and pay the rent as well.’

‘We are concerned about people’s health safety. We will stop our operation until the government sets any further directives,’ Mesbah added.

Iftekhar Uddin Nawshad, owner of famous Madhumita Cinema said, ‘We did not open our cinema although many cinemas started screening films from October 16, 2020. We are looking forward to releasing films marking Eid-ul-Fitr. If the situation continues, we will suffer huge losses.’

‘I decided not to open Madhumita for a year due to the lack of quality films and not keen to reopen now if the dearth of good films continues,’ Iftekhar added.