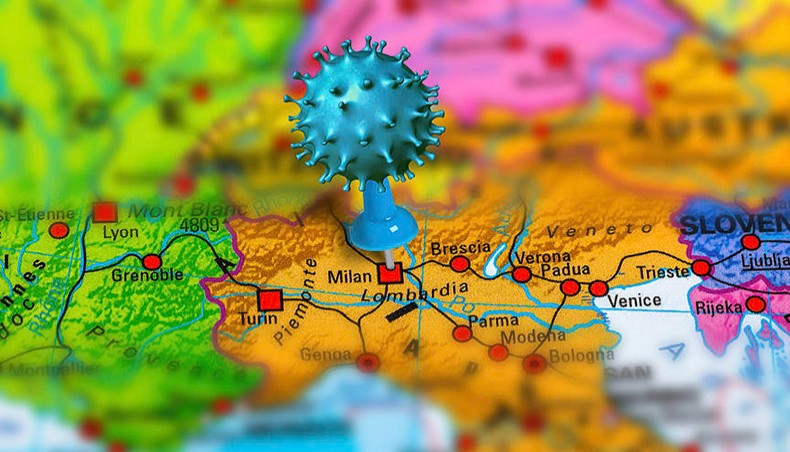 The pandemic is without doubt the most data-driven event that has ever occurred, writes Philip di Salvo

GRAPHS, statistics and data analysis have populated the coverage of the pandemic for over a year, becoming the most common journalistic strategy for communicating updates to the public. Financial Times reporter John Burn-Murdoch defined the COVID-19 pandemic as ‘the biggest story ever encountered’ as a data journalist. Every newsroom had to face a deluge of data from a variety of institutions providing regular updates about the spreading of the new coronavirus.

Journalists in Italy, the first European country to be massively hit by COVID-19 in early 2020, were among the first to deal with the ‘datafied’ side of the pandemic. Italy’s Civil Protection Department’s daily data briefing about new infections and deaths due to COVID-19 became a powerful and ritual event, setting the media agenda with new figures each day. The media then had to produce, reproduce and publish data analysis on the spread of the virus in the country. Yet this data reporting never occurred in a frictionless way and a series of controversies emerged, which were debated by journalists and data scientists in the media and on social media.

Data journalists frequently pointed at irregularities and inconsistencies in the Italian data. For instance, it has been underlined how the comparability of data gathered in different Italian regions was problematic, due to the very different approaches the decentralised Italian health system offered in terms of testing, data gathering and overall care strategy.

Moreover, data journalism is still struggling to become a mainstream and widely adopted practice in Italy — it is not yet a routine practice like in other western countries. No major Italian media outlet is equipped with a dedicated data newsroom and most of the data journalism produced in the country comes from freelancers who built their skills independently. Journalistic education in Italy is loosely organised and most of the data journalism training activities are offered on an irregular basis or by activist organisations.

These structural limitations of Italian data journalism influenced the coverage of the COVID-19 pandemic in a country that is, in general, far less structured and institutionalised than countries such as Germany or the United Kingdom. These peculiar circumstances and characteristics make Italy an interesting case study to understand how data journalism has been pivotal in the journalistic understanding of the COVID-19 pandemic, highlighting also certain limitations in regard to how data-driven reporting may effectively help the public in making sense of major global events.

HOW did Italian data journalists respond to the ‘datafied’ side of the pandemic? I initiated a study on their coverage of COVID-19, which was published in a special issue of Ethical Space: The International Journal of Communication Ethics. For this research, I conducted a series of qualitative interviews with a sample of some of the most active Italian data journalists (of whom previous research has estimated that there are at most 20). Interviewed journalists included those working for national dailies (Il Sole 24 ore), local dailies (Eco di Bergamo), independent collectives of data experts and science communicators (Dataninja and Formica Blu) and freelancers working for specialised outlets (Wired and Rai Radio 3 Scienza).

The interviews were later used as the basis of a thematic analysis, aimed at identifying recurring topics and themes from journalists’ views on the topic of the research. Overall, four major themes emerged, mostly related to sourcing and investigative strategies and the ongoing structural limitations and constraints still faced by data journalism in Italy.

These were: ‘data flaws’ and critical views on the usefulness of the official figures; the need to find different strategies and sources of data to effectively report on the pandemic; a lack of ‘data literacy’ among Italian journalists and their unpreparedness and diffused ‘dataism’; and the impact of the structural limitations of the Italian market for data journalism.

As anticipated, Italian data journalists questioned the reliability of official data and spotted various ‘data flaws’ in the datasets made available by national health authorities and the government. Despite a huge effort from the Italian public administration, incomplete official data were frequently provided to the public, or data gathered in incoherent ways and incapable of reflecting the actual impact of the pandemic in Italy. This was mostly caused by a variety of factors, including the fact that testing policies changed various times in the course of 2020 and Italian regions followed different approaches, making the counting of the cases very unreliable. Data on infections in Lombardy, for instance, was calculated differently than that on Veneto or Sicily. As early as March 2020, a popular news story defined data objectivity as ‘an optical illusion’.

These inherent flaws in the official data inspired Italian data journalists to follow different leads and to look beyond official sources to find more meaningful and representative information. For instance, Eco di Bergamo, a daily newspaper in the city of Bergamo, one of Italy’s most severely hit areas in early 2020, inquired about the overall numbers of deaths in all municipalities of the province, finding that the official data showed only a limited portion of the actual death toll caused by the pandemic. The newspaper’s approach gained international visibility and was replicated elsewhere.

Interviewed data journalists also questioned the average data literacy and skills of Italian journalists, underlying the overall unpreparedness of most newsrooms to cope with statistics and data science in such an overwhelming way. This was judged as problematic, affecting negatively the general coverage of the pandemic: in particular, according to interviewed journalists, the mainstream media frequently committed mistakes or published inaccurate data-driven content. Overall, official figures have frequently gone unquestioned or saddled with an unduly ‘positivistic’ approach, sometimes referred to as ‘dataism’ — that is, a misplaced belief in the assumed objectivity of numbers.

Finally, the journalists interviewed assessed the coverage of the pandemic in the light of ongoing structural problems of Italian data journalism. In particular, they pointed to the mainstream media’s lack of investment in the field and the limitations of outsourcing to freelancers, whose honoraria in Italy are traditionally low, the symptoms of very precarious working conditions. Moreover, the lack of a proper transparency culture in the Italian political-bureaucratic system played its own part in making access to data more complex.

OVERALL, results of my research confirm how fundamental data journalism can be in making sense of massive events with clear ‘datafied’ traits. When it comes to Italian journalism, already very engaged data journalists responded with enthusiasm to the task, providing excellent work in precarious conditions, with little support from mainstream outlets. What emerges from this research is the existence of a ‘data divide’ in data-driven reporting, caused by both the skills available to journalists and the quality of data available.

Interviewed journalists have frequently stressed the difference between mere ‘graph-making’ and actual data-driven reporting. The all but frictionless co-existence of these two dimensions may pose a long-term problem for the growth of data journalism well beyond the Italian context, exacerbating the difference between actual investigative and data-driven reporting and other forms of more passive reporting on unquestioned, and potentially unreliable, data.