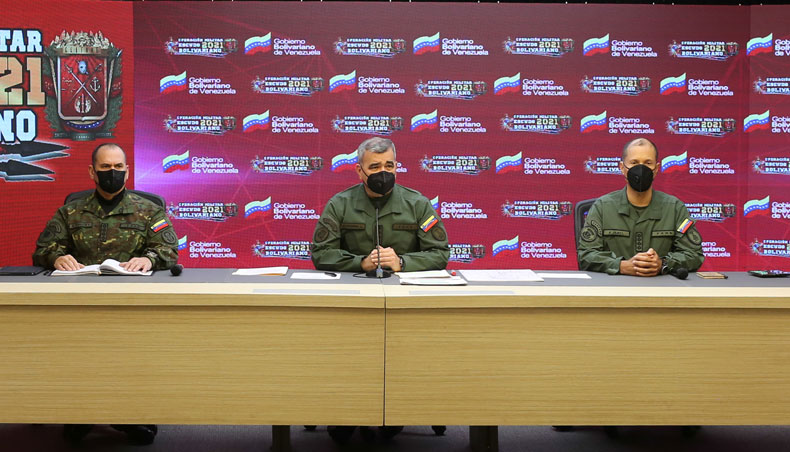 Hand-out picture released by the Venezuelan Presidency of Venezuela’s Venezuelan defence minister Padrino Lopez, speaking next to the commander of the Armed Forces Operational Strategic Command, Remigio Ceballos and the second-in-chief General of Military Aviation Pedro Juliac, during a broadcast message at Miraflores Presidential Palace in Caracas on April 5, 2021. — AFP photo

Venezuela said on Monday that eight of its soldiers have died since an offensive started two weeks ago against armed groups operating on the border with Colombia.

Thirty-four have been injured, defence minister Vladimir Padrino said in an address broadcast on state television, upping the death toll given over the weekend from six soldiers and nine ‘terrorists.’

Venezuela’s armed forces have engaged in clashes with Colombian armed groups in the western border state of Apure since March 21, displacing thousands of civilians towards Colombia.

On Sunday, president Nicolas Maduro said the groups, which he claims have links to the Colombian army and the government of his counterpart Ivan Duque, have planted anti-personnel mines on Venezuelan territory, contributing to the military casualties.

And he said Venezuela would request ‘immediate aid’ from the United Nations to clear the mines.

Padrino said that Venezuelan soldiers have deactivated 16 explosive devices near the town of La Victoria in Apure.

The operation has so far resulted in more than 30 arrests and the seizure of weapons, explosives and drugs, according to Caracas.

Venezuela does not name the armed groups it blames for the unrest, apart from calling them ‘terrorists’ or linking them to drug trafficking or to Duque.

Maduro has previously said they could be dissidents of the now-disbanded Revolutionary Armed Forces of Colombia rebel group.

The FARC signed a historic peace agreement with Bogota in 2016 to end half a century of armed conflict.

But some guerrilla fighters refused to join the peace process and have continued their struggle, while also mixing with and battling drug-traffickers in lawless areas of Colombia.

Diplomatic relations between the neighbouring South American nations have been non-existent since Colombia recognised opposition leader Juan Guaido as Venezuela’s interim president in 2019.

Bogota has also long accused Venezuela of shielding members of FARC and armed rebel group ELN on its soil, a charge Maduro denies.